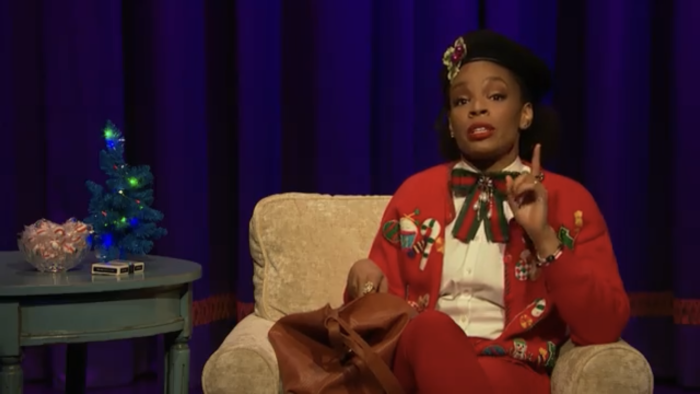 I love a good Holiday special. There are few things that get me in the holiday spirit as well as watching Pee-Wee Herman ice skating with Little Richard or Chewie rushing home to celebrate Life Day. This year, however, it was a bit harder to get in the swing of things. At least it was until I watched The Amber Ruffin Show: Holiday Extravaganza!

The word jolly doesn’t even begin to describe Amber’s disposition in this special episode. There is a genuine love for Christmas that emanates from her like oh so many sparkly lights. It’s downright infectious. I feel like I was visited by a friendly ghost instead of the usual chain shaking kind. You know, the kind Amber threatens to beat up at the beginning of the show!

A key to a successful Holiday Special is injecting it with as much of yourself as possible. Amber’s special is so much on brand as far as her show is concerned, it would honestly work as a wonderful gateway drug for new viewers. You get Tarik fighting an Elf on a Shelf, Amber playing your Fun Auntie, charming (and brutally honest) musical numbers, and even a Black Santa, dagnabbit!

Joking aside, the episode is also sincere. There’s not a sketch or a song that feels phoned in. That may seem like a low bar, but I’ve definitely seen some specials this year that stink of “You just need me to Zoom in a Christmas sweater? Fine, but I won’t be into it.” And I get it, this has been a rough year, but that makes Amber and her crew’s pure enjoyment even more special.

So, if you need a little extra push this holiday season, check out Amber Ruffin’s Holiday Extravaganza. This phrase is a little played out right now, but it was exactly what I needed. I’ll be happy to revisit it in the years to come OR, ideally, watch Amber make more and more holiday specials.

You can watch the whole thing on Peacock for free (which I recommend you do) but here’s a clip!

← Willam Spills The Tea On Why This Queen Was Really Kicked Off 'RuPaul's Drag Race' | Watch the Trailer for 'Death to 2020,' the Mockumentary from Black Mirror's Charlie Brooker →