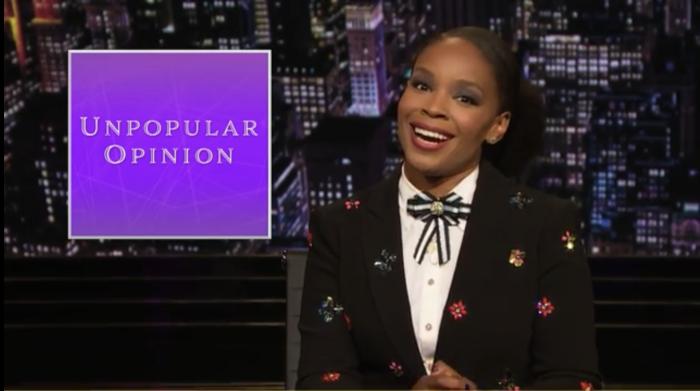 Amber Ruffin Has Some Unpopular Opinions

Popular Opinion: Amber Ruffin is one of the best late-night hosts to ever get behind a desk. With almost a year on the job, she has proven that several times over. The late-night landscape has been blessed by her comedic timing, joyful presence, and willingness to be silly. The Amber Ruffin Show is funny and … good. Because of that, she’s able to play with audience expectations.

In the newest episode of Amber’s show, she laid out a segment called Unpopular Opinion. It’s pretty much what it sounds like, except there’s one twist. Most of Amber’s unpopular opinions would be popular. Obviously, that’s the joke of the segment, and I am not here to explain jokes. Amber has earned her audience’s trust. This bit is a testament to that.

Getting an audience to accept the basic premise of a sketch is not always easy. It’s even harder to flip the premise on its head. Amber promises one thing and then gives another. That makes it that much funnier. She doesn’t get to that point if the audience isn’t on her side.

I would like to start my week by confidently assuring you that Amber Ruffin has the audience on her side. In less than a year, that’s impressive. Popular Opinion: there are more years and more laughs where that came from.