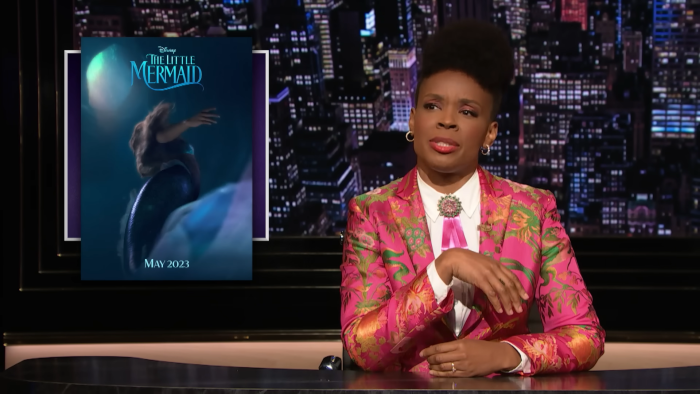 Sometimes things happen with such regularity that they begin to form a pattern. For instance, Hollywood’s casting of diverse leads in usually white roles. The pattern goes like this: the casting will happen, people of color will rejoice, and then certain neckbearded, insecure, self-centered white people will complain about said casting in an attempt to overpower the celebrations. We’ve seen this pattern on full display with the new live-action Little Mermaid movie, and Amber Ruffin has had enough of it.

In the recent return episode of Ruffin’s eponymous show, the host dug deep into why white people complaining about things like a Black mermaid is not only shitty, it stands in the way of progress. Citing studies from the National Library of Medicine, Ruffin explains how increased white interest will, well, increase white interest. If white people speak positively about shows/movies with people of color to other white people, the shows will get more eyes on them.

The snag is that studies find white people to be less invested in shows and movies that don’t feature people who look like them. This stems from a lack of empathy. If white people just tried to care, media starring people of color will have a better chance to thrive. Lord knows that people of color have already helped as much as we can. I’m looking at you, most movies and television.

The angriest I got during this piece was when Amber showed some jackass in a beard talking about why a Black Little Mermaid wouldn’t make sense “scientifically.” I worked a lot of comic cons between 2009 and 2012. A time when the older guard was rightfully dying out as cons started to become less about comics and more about movies and TV. While there are some downsides to that change, it’s worth it to be assured I won’t have to listen to a 45-year-old white man tell me how Spider-Man can lift cars and stick to walls, but if he’s Black it stops making sense. It’s always the same argument and it’s always dumb.

It’s good to have Amber back and to hear her go off on a bunch of pouty-faced man-babies who try to insist that no one else have a seat at the table. I don’t work cons anymore, so I avoid a lot of these people. But, they’re still out there. They’re still loud, and someone has to put them in their place!