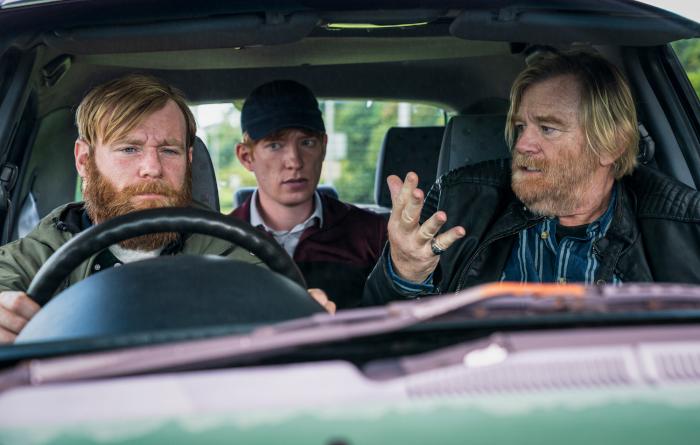 Amazon’s ‘Frank of Ireland’ Review: Off-Kilter Comedy With An Emphasis On The “Off"

I love comedy. I stand by the assertion that comedy is more challenging than drama. The ability to purposefully incite laughter is a wonderful thing and for those who do it well, I have nothing but respect for them. You know what I don’t find funny? Toilet humor. Cringe humor. Humor that relies heavily on incompetence and buffoonery.

Guess what sort of humor Amazon’s new comedy Frank of Ireland doles out?

Well, if you guessed “everything that you hate, Kaleena,” you get the prize.* Indeed, Frank of Ireland is so devoted to comedic infantilism, at one point I honestly had my doubts that I would be able to make it through the season.

The show stars series co-creator Brian Gleeson in the titular role of Frank, a 32-year-old man-child wannabe musician who’s never held a job and has a level of self-awareness that ranks just above an obstinate rooster. Frank lives with his mother, Mary Marron (Pom Boyd), who vacillates between coddling and cursing out her unmotivated son. Frank’s best friend is Doofus, played by Brian’s real-life brother, Domhnall Gleeson (who also co-created the show with Michael Moloney). Doofus is the banana to Frank’s peanut butter, equipped with a slightly better capacity for reasoning which is offset by his almost-childlike nature. There’s also Áine (Sarah Greene), Frank’s ex-girlfriend, who feels compelled to use him as a device to sabotage all of her new relationships. Her current boyfriend, Peter-Brian (Tom Vaughan-Lawlor), is a doctor who feels the need to constantly remind people of his profession, whose philandering ways are the tip of the iceberg when it comes to his and Áine’s increasingly toxic relationship. Despite their differences, each of these individuals entertain Frank’s antics for some inexplicable reason.

There’s not much to the plot otherwise. Frank stumbles through situation after situation unfettered by much of anything resembling consequences or retribution. Not that anything would come of it, seeing as how every stern word slides off of him like water on a duck’s back. I even hesitate to apply the descriptor “cringe comedy” to this series since one of the main identifiers of the sub-genre is that there has to be embarrassment involved, an utterly nonexistent sentiment seeing as how Frank feels none at all. He’s a modern-day Ignatius J. Reilly, except take the tendency for philosophical bloviating and exchange it for citing inappropriately timed movie references instead.

When Frank isn’t going on about his needs at the expense of others or constant need for attention, the show spends far too much time trying to get laughs from gross and raunchy humor (especially the first two episodes). See Frank hold a bag of liquid feces. See Frank hold a pissing dog. See Frank have an inappropriately timed erection. See Kaleena reconsider her career as a television reviewer.

With that said, the biggest problem with this series isn’t that it’s filled with obnoxious gross-out humor; it’s simply just not that funny. There’s the occasional chuckle, often provided by Doofus, whose guilelessness renders him more tolerable and is used to great effect by Domhnall. As far as laughs go, episode three is the stand-out and features the first laugh-out-loud moments for me. One scene in particular has a moment of physical comedy (in a bit involving prop chairs) that’s so sudden and absurd, I had to hit pause in order to catch my breath from laughing so hard. I hoped the episode would mark an upward turn for the remaining episodes—of which there are only six total, which does make it a short watch for potentially interested viewers—but unfortunately it never happens. The writing certainly improves, especially as the supporting characters become more developed, but the refusal to have Frank evolve as a person automatically puts a limitation on how far the gags can possibly go. Even the cameo by real-life father Brendan Gleeson, as welcome as it may be (few things are not improved by the elder Gleeson’s presence), is fenced in much the same way. Yeah, these characters are ridiculous, but without a sense of reality to anchor things, is it possible for the ridiculous to be funny?

At the end of the day, Frank of Ireland never manages to elevate itself above what feels much like a familial inside joke. While the Gleesons are clearly having a swell time, they’re unable to convey what exactly it is that’s supposed to be funny to the rest of the world. There’s also the fact that there can hardly be a worse time to create a work of fiction revolving around a man-child who lacks self-awareness and suffers little to no consequences. To say that it’s been done is an understatement. In a period of television and cinema that is, as a whole, leaning more towards messages of kindness—enough to inspire the wide-eyed moniker “nicecore”—Frank in Ireland feels like an aberration. It doesn’t distinguish itself in the sense that it provides a refreshing disruption to current trends as much as it’s an unruly child acting up during quiet time in school. Unruliness certainly appeals for many but for those like myself, you’ll probably be better off looking for laughs elsewhere.

*there is no prize, I have nothing to give you beyond my suffering. ENJOY.

All six episodes of Frank of Ireland are available to stream on Amazon Prime.

Kaleena Rivera is a tv and film writer. When she isn’t researching Ireland and reeling from the discovery that St. Patrick was not, in fact, Irish, she can be found on Twitter here.