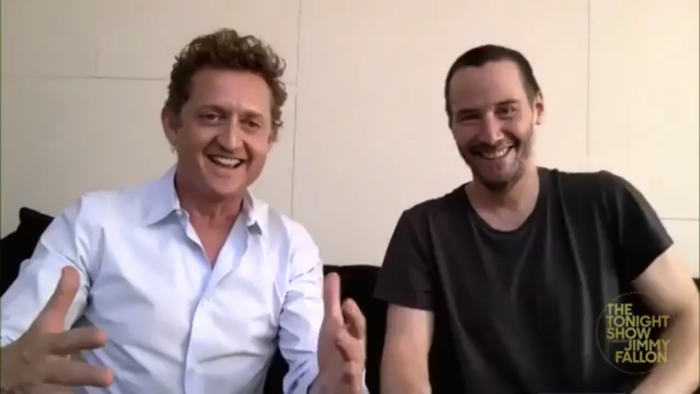 In a perfect world, I would have been able to see Bill & Ted Face The Music in theaters this year and cry with others instead of alone on my couch, crying by myself. Having been a fan of the two time-traveling slackers for most of my life, I was looking forward to the film immensely. 2020 had other plans. Try as it might though, this year couldn’t disrupt one of the best aspects of the film’s release: Alex Winter and Keanu Reeves hitting the talk show circuit!

The pair have been friends since the audition process for Bill & Ted’s Excellent Adventure and boy oh boy is that evident as hell. Not only do they enjoy talking about their new film but they clearly just like being around each other. They are the epitome of “Best Friend Goals.” Even though the film was released months ago, their appearance on The Tonight Show With Jimmy Fallon got me excited all over again.

Another incredible aspect of their newest interview is that they were both in the same room! Thanks again to 2020, most of their appearances this year have been relegated to separate rooms. For whatever wonderful reason, they were able to zoom with Fallon together in the same room and it is that much more enjoyable.

While we may never see another Bill & Ted movie, it warms my heart to know that such a friendship was borne out of those films. There is real, palpable love there. And if the most I get from them together in the future is more appearances like this, I’ll be a happy little dude.

← Hear Me Out: The World Needs Himbo Merman Ken | What'd We Say About Sex Parties During a Pandemic, Huh? →