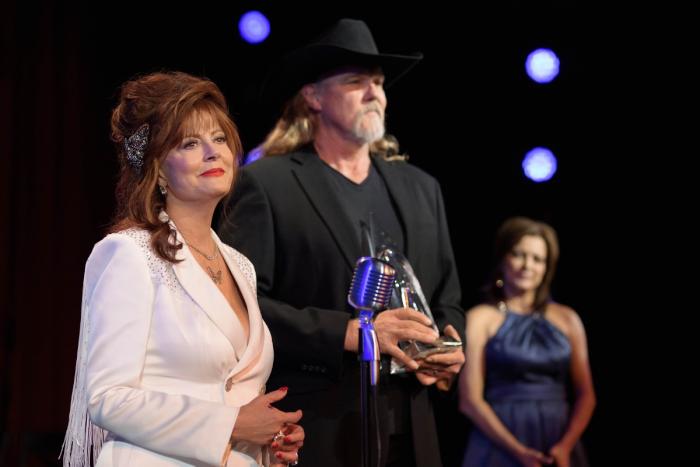 I watched the second episode of Fox’s Monarch last night mostly because I wanted to find out if they’d actually go through with killing off Susan Sarandon’s character. Spoiler: They did. But my god, what a terrible show. The writing is atrocious, the cast is bland, Trace Adkins can’t act for sh*t, and the only good thing about it may be that Anna Friel is getting a paycheck. Not even a Shania Twain cameo could redeem it. A television show shouldn’t be allowed to be this bad unless it involves Archie, a time hole, dinosaurs, or all three.

The bizarre parallels to Naomi Judd, however, continue. Recall that Monarch — a cross between Nashville and Empire or … just a Nashville rip-off — is about the Romans, the first family of country music. Sarandon plays Dottie Roman, the matriarch. She has red hair, as do her daughters, who are fiercely competitive but who are also great together (in the context of the show anyway). In the pilot episode, we learn that Dottie has cancer and takes her life, just as Naomi Judd did back in April. Moreover, in the second episode, we learn that — like Naomi Judd — Dottie meticulously planned her funeral, which featured a number of celebrity country musicians (like Shania Twain), and the sisters even performed “Love Can Build a Bridge,” a song performed by Wynona Judd during her mother’s funeral.

The reality, though, is that it’s all purely coincidental. As the new showrunner, Jon Feldman (who replaced Michael Rauchman last November) told Deadline, production on the season had already been completed before Naomi Judd’s funeral (the series was originally meant to air last January). It’s a complete coincidence, though it just so happens that Jason Owen, a music manager in Nashville who is a producer on the series and a close friend to the Judds, also produced the television production of Naomi Judd’s real-life funeral. Meanwhile, because the season had already been shot and was in the can, and the cast had already moved back to their separate parts of the world, there was no way to tweak the first couple of episodes, according to Feldman.

It’s just one of those strange, eerie coincidences.

Honestly, it was one of those truth-is-stranger-than-fiction moments. It was tragic, first of all. But it was also eerie in some of the parallels. Like I said first and foremost, it was just a tragic incident. I mean, it was a turn of events that in retrospect is eerily similar to some of the things we dive into in the show.

Jason Owen spoke to Variety about the coincidence:

After the tragic events with Naomi, I’m very close with the family and was very close to the situation, but I didn’t connect the dots on it until after Naomi’s funeral, which I also produced (as a live broadcast), as you know. I was at home a week or two later, watching all my episodes because they were just getting finished with the music and the graphics in, and I sat down one night to watch the first three episodes back to back — and it really hit me hard. I was like, oh my God, this is such a sad and strange coincidence. “Coincidence” doesn’t give it the weight I’m trying to give it. It really bothered me. It still bothers me, to be honest, just because I love those women so much.

Obviously, I talked to Wynonna a lot about it, just to make sure that she knew, and she was awesome, as she always is. She was like, “That’s just art imitating life, life imitating art, unfortunately.”

I can’t imagine I’ll continue to watch this show — it’s so bad — but for those who are curious, Sarandon will continue to pop up throughout the season in flashbacks (and hopefully not again as a hologram at her own character’s funeral to show up her sister, from the dead, as she did in last night’s episode). Moreover, the dead body that Trace Adkins’ character buries three months after the death of Dottie will start to come into focus in episode six when the present and the future timelines converge. The dead body and Dottie’s suicide are only tangentially related, according to Feldman.