A Look Back At The Greatest Performance Of Jean Smart's Career

Don’t call it a comeback. Because Jean Smart really has been here for years, and she has been putting in the work during all that time.

Last night, the 73rd annual Emmy Awards aired on CBS, and once again gave television junkies like myself multiple reasons to either yell, “Yaaaaaas, bitch! Yaaaas!” when one of our faves wins for a job well done, or to yell, “Are you f-cking kidding me?!?!” if one of our faves loses just so the Emmy can go to a show or performer that is getting way too much attention when they’re not even that good, never were that good, and really should’ve called it quits and aired its series finale a long-ass time ago. (Yes, I’m aware that I’m being a tad bit hyperbolic, and no, I don’t care) One of the winners who gave us a reason to go with the former response is Jean Smart herself, who was so damn good this past year that she was nominated by the Emmys (Outstanding Lead Actress in a Comedy Series and Outstanding Supporting Actress In A Limited Or Anthology Series Or Movie) for two roles: as Helen, the sarcastic, Fruit Ninja-obsessed, zero-tolerance-for-bullshit-but-still-has-your back mother of Mare Sheehan (Kate Winslet), on HBO’s Mare Of Easttown, and as Deborah Vance, the legendary comedienne who also has zero tolerance for bullshit but will only have your back when you’ve shown that you’ve damn well earned it, on HBO MAX’s Hacks. (she won in the latter category).

(Jean Smart is responsible for several laugh-out-loud moments on Mare Of Easttown, a show that is definitely not remembered for its laugh-out-loud moments, but for me, the funniest scene in the entire series will always be this look that Mare gives to a very embarrassed Colin when he accidentally introduces her to his mother as “My Mare.”)

There have been a few articles about and interviews with Jean that have pointed out how ridiculous it is that the term ‘comeback’ has been used to describe her career in recent years, and especially how the term ‘Jeanaissance’ has been coined for all of the attention that she’s been getting for her work onscreen. We all remember her role as Charlene on Designing Women (and if you’re not old enough to remember, it’s now streaming on Hulu), which she soon followed with a memorable recurring guest turn on Frasier as Lana, one of Frasier Crane’s girlfriends. She then appeared on shows such as Samantha Who? (which was critically acclaimed and unfortunately short-lived, but won her an Emmy for Best Supporting Actress in a Comedy Series), 24, as First Lady Martha Logan whose very first appearance on the series was in a scene where her assistant is helping her apply makeup and Martha responds by looking at herself in the mirror and saying: “I look like a wedding cake” before dunking her entire face in a bowl of cold water; Fargo as Floyd Gerhardt, matriarch of the Gerhardt crime family; Legion as psychiatric therapist Melanie Bird; Watchmen as FBI Special Agent Laurie Blake; and her roles on Hacks and Mare Of Easttown. Jean’s appearances on those last three HBO series have made many people sit up and take notice of her as they said “Holy shit! Jean Smart is so awesome!” and also made other people respond with, “Of course she is, and she always has been! What took you so long to finally realize this?”

One of her very best performances, however, is one that hasn’t gotten very much media attention, but is still deserving of some love as part of the (my apologies to Miss Smart for using this term, and especially if it causes her to throw her iPad into the nearest swimming pool) “Jeanaissance.” That role is Pickles Oblong from The WB (and then later Adult Swim) animated series The Oblongs.

Pickles is a former resident of the Hill, where the rich get richer and they all live the glamorous life that Sheila E. once sang about before she met and fell in love with Bob (Will Ferrell). Their romance led to marriage and a family, which then led to her moving to the Valley and losing all of her hair (and wearing a blonde beehive wig) as a result of the radioactive chemical spills from the Hill into the Valley that have caused nearly every Valley resident to have physical deformities, including Bob, who has no arms and legs; Bob and Pickles’ youngest son, Milo, who regularly squints and suffers from numerous mental disorders; their older twin sons Biff and Chip (conjoined twins attached at the hip and sharing a middle leg); and their youngest child and only daughter, Beth, who has an entire growth coming out of the top of her head due to meat contaminiated with bovine growth hormones. (FYI: Beth is voiced by Jeannie Elias, Biff and Chip are voiced by Randy and Jason Sklar, and Milo is voiced by Pamela Adlon, who also voiced Bobby Hill on King Of The Hill) 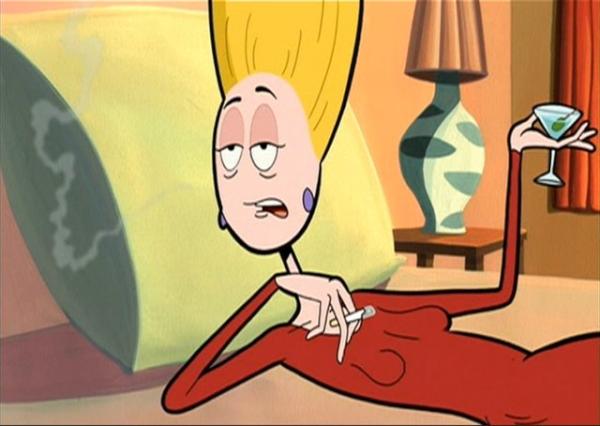 Despite the fact that she smokes cigarettes and drinks hard liquor all day and every day as if they’re going out of style (enough that she wakes up in the morning and the first thing she says to Bob is to ask whether or not she’s in an intervention), Pickles clearly loves her family (especially Bob, as evidenced by their need to have sex in the kitchen and accidentally end up traumatizing Biff and Chip when they walk in on them), and is willing to do whatever she can to support them when they need it most. Whether that includes helping Milo spend some time with the girl of his dreams (even though said girl is actually an alien from outer space who performs lab experiments on him for research), helping her court-ordered troop of Little Amazons (they’re like the Girl Scouts, but with a lot more homoeeroticism) work hard to obtain the merit badges they need and want: by having them shave her legs and wash her scalp while she’s taking a bath, and working alongside her kids and their friends to help their sworn enemies Pristine Klimer, her spoiled teenage daughter Debbie, and Debbie’s equally spoiled friends The Debbies (all of whom look and sound exactly like Debbie) survive their abandonment in the absolute worst part of town so they they can get home by morning. (But not without seizing a perfect opportunity to slap the sh-t out of Pristine multiple times in order to knock some sense into her.) Granted, there was that one time when Pickles decided to replace her addiction to cigarettes and liquor with an addiction to fight clubs and extreme sports, which nearly caused Beth to die after she fell from the roof of a skyscraper that Pickles was about to parachute from, but she does come through in the end when she’s really needed. (Fortunately, that addiction to fight clubs and extreme sports didn’t last long, and Pickles went back to the carcinogenic and intoxicating devils she knows so that the status quo could be properly restored)

The Oblongs aired eight of its thirteen episodes on The WB before the network canceled it, and Adult Swim aired the final five, which helped the show go on to become a cult classic. There have been rumors that Angus Oblong, who co-created the series and wrote the book that inspired it, Creepy Susie and 13 Other Tragic Tales for Troubled Children, wasn’t entirely fond of this adaptation and wasn’t permitted to have much input in how it was made, but whether those rumors are true or false, The Oblongs is still one of the better animated series to have aired during the early 2000s, and it’s certainly one of the better shows to have aired on The WB in its early days. (It’s no Zoe, Duncan, Jack, and Jane, but let’s not hold that against the show).

So, Pickles Oblong Hive, stand up, and congratulations to the goddess Jean Smart for bringing home another Emmy. Though it may not have felt as rewarding to hold one on stage during her acceptance speech compared to when she was on the set of Watchmen and holding this… 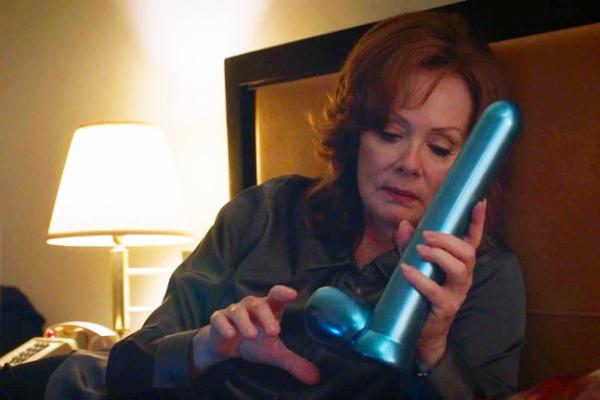 The Oblongs is available for rent on Amazon Prime Video.