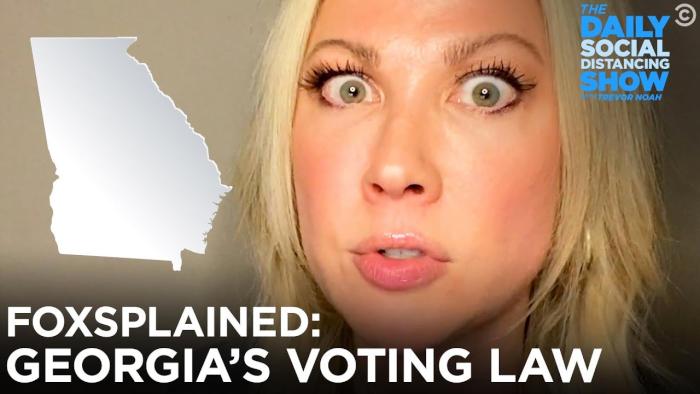 On my podcast, I would have my guests play an improv game I called “Spin It.” In that game, I would present them with a story they hadn’t heard before (at least not from me), that was controversial or, ya know, bad and they would have to “Spin It” to me on the spot. Usually, my guests would go to great (and hilarious) lengths to make the awful story seem palatable. What I’ve learned over time is that people in real life don’t go to those great lengths. That is fully on display in this recurring bit from The Daily Show’s Desi Lydic.

In FOXsplained, Desi will react to recent news, alleging that she’s gotten all of her information from the far-right “news network”. Not only does she do it with hilarious, manic energy, she actually makes it feel … real. You can very easily go down a YouTube rabbit hole (please don’t) and find real videos just like this. Wide-eyed, hyper people who are now woke to the worries of … wokeness. She captures that energy so perfectly it’s spooky.

In a new entry, Desi tackled the Georgia Voting Laws, and HOO boy, it’s depressing. The things she’s saying sound absolutely nuts and yet, accompanied with several FOX News clips, you can see how a vulnerable, uneducated or hurtful person may jump to those same conclusions. Luckily, it’s also pretty damn funny. For instance, her resistance to drinking water to prove voters don’t really need it is truly some A+ work.

The best satire has exaggeration but also some hard truths. Desi Lydic nails that balance in these segments. While it may seem hard to deal with right now, as we are actively involved in the Georgia Lawmakers’ nonsense, it is still important. You need to look at stories from all angles, even if it just confirms what you already know.