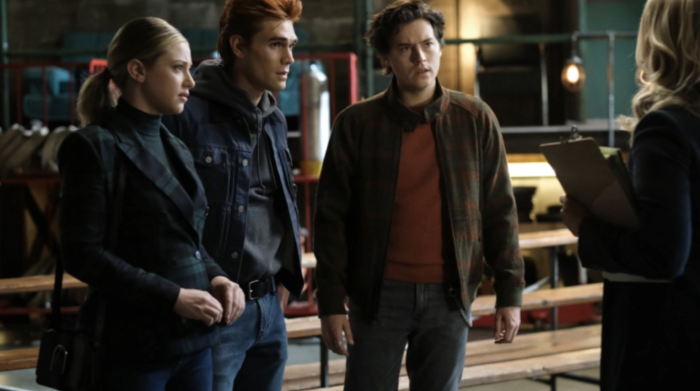 A Gang War Orchestrated by a Mind-Controlling Supervillain Ain't Gonna Cut It, Riverdale

Remember many years ago when Miley Cyrus — trying to shake her child-star image — engaged in an escalating series of outlandish acts and basically moved the Overton window for batsh*t behavior so far over that she effectively erased herself from the news cycle? Even the celebrity gossip sites got bored with her antics. Cyrus wrote her career into a corner that she couldn’t escape from until she married Liam Hemsworth and then cheated on him with her girlfriend or something.

I think about that a lot, most recently with this week’s episode of Riverdale, which might have lit up the WTF part of my brain a few seasons ago. But now? A gang war that ends because one gang blows their own brains out under the mind control of a supervillain isn’t going to cut it anymore. There’s nowhere to go. We’re in episode 8 of a season of American Horror Story territory now, where Ryan Murphy eradicates the stakes and starts throwing kitchen sinks at the screen.

I mean, look: This season has already featured a pocket universe, demonic possession, the off-screen assassination of a major character by a hitman, and characters magically imbued with superpowers. There’s nowhere left to go except …

But that’s not for another two weeks. In this week’s ho-hum episode, Percival Pickens continues in his pursuit to destroy Riverdale. What is his motivation? Who knows? Who cares! Certainly not the writers, who have decided to drop a supervillain into the proceedings who uses the … local newspaper to do his bidding. Yes, after writing an op-ed for the Riverdale Rag (or whatever it’s called) in last week’s episode designed to rid Riverdale of its unhoused population, Pickens is back this week with another article decrying the gang problem in Riverdale. The Serpents and the Ghoulies are ruining everything, so Pickens holds a meeting to get Toni kicked off the city council — because every city elects a local gang leader to their council — in an effort to disband the Serpents. It doesn’t work, although Toni does try to talk her husband, Fangs, into turning the Serpents into a political activist group. The bag of weapons in Fangs’s possession doesn’t take kindly to the suggestion. No matter! Because the Riverdale cops — which now count Percival as a deputy — take possession of those weapons and arrest Fangs.

However, Toni’s baby Anthony goes missing, stolen by those damned Ghoulies! How convenient for Percival, because when the police conduct a raid on the Ghoulies to retrieve Anthony, all the Ghoulies blow their own brains out under the mind control of Percival (all, except, Twyla, because someone needs to survive and rebuild the Ghoulies so that they can be used as another plot contrivance a few episodes from now).

Before the Ghoulies offed themselves, they challenged the Serpents to a gang war! Or so the Serpents thought. It was actually a trap set by the coppers, but when the police arrived, Toni was able to stop Percival from mind-controlling them into killing themselves by holding up her phone and announcing that she was live-streaming the proceedings, which is a total baller gang leader move! Who knew you could cock-block mind control with Facetime?!

However, after Toni reclaims baby Anthony, Kevin decides to file for full custody because of the dangers exposed to the baby by Toni (I missed a few episodes last season when I got fed up with Riverdale and missed that Toni had a baby with Kevin, who is gay, but then married Fangs, and I’m a little unclear on the specifics).

Elsewhere, Abigail — still in possession of Cheryl’s body — decides that she wants to reincarnate the spirit of her old lover, Thomasina, and put her soul in the body of Toni. Before she can do so — and after Abigail briefly joins the Ghoulies — Jugghead reads Britta’s mind and learns that Cheryl is being possessed. Archie, Betty, and Jughead (who share a scene this week!) tie Abigail up to a stake and threaten to burn her like a witch but ultimately cast a banishment spell. Cheryl gets her body back, and Abigail is banished into a creepy porcelain doll and locked in a glass case. I’m sure the demon-possessed doll will never come back into play! They should hire Sara Paulson to do its voice.

After all of that, it’s Veronica and Reggie who are given the afterthought subplot. We learn that Reggie’s dad only has two years to live. Reggie wants him to be happy for the remainder of his life, which apparently means allowing him to blow all his money and rack up a lot of gambling debts in their casino. Let the man run the casino into the ground. He’s dying. It’s the least you can do!