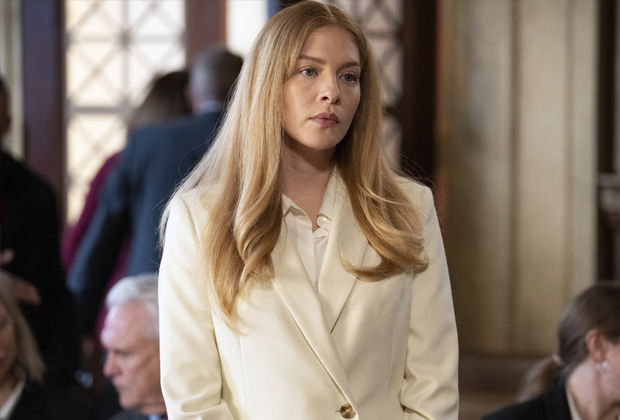 A Cringey 'Law & Order' Rips Elizabeth Holmes from the Headlines

This week’s second episode of the Law & Order revival at the very least returned to its normal format. It opened with a murder and a bad joke, which I might have appreciated more had the season premiere not already made me hate Jeffrey Donovan’s Detective Frank Cosgrove. L&O has also been off the air for 12 years, so it has no shortage of stories it can rip from last decade’s headlines. Last week, they kicked it off with a Cosby case, and this week, they jump straight to Elizabeth Holmes (coincidentally, I watched this after watching the first two episodes of Hulu’s The Dropout).

The series, however, is not dangling its toes into the culture war waters. They’re diving right in with a case about a pathological liar who tries to ride the MeToo wave to an innocent verdict.

I also feel like in these first two episodes, the police side has gotten short shrift: There’s not much of an investigation here. When you have an Elizabeth Holmes character whose tech company is about to sink under fabricated test results for an industry-changing device, you already know who the murderer is going to be. It didn’t take long for Detectives Bernard and Cosgrove to circle back around to her, and she also happened to be the fiancée of the deceased (and yes, there is some Sunny Balwani business going on here).

The meat of the episode takes place during the murder trial, and here’s where I am starting to appreciate the political and legal pragmatism of Hugh Dancy’s E.A.D.A. Nolan Price: He says that, for the purposes of jury selection, they should choose as many low-income people without college degrees as they can. When Odelya Halevi’s A.D.A. Samantha Maroun looks at him like, “WTF?” Price explains that poor, uneducated people have a natural bias against wealthy, successful techy types. It’s a broad stereotype, but that’s how jury selection works.

Alas, it quickly backfires because, after it’s apparent that they’ve got the Holmes character — Rachelle Lefevre’s Nina Ellis — dead to rights on the murder charge, she quickly changes her legal strategy. She claims that she followed her fiancé out into the park in the middle of the night, murdered him, and tried to frame someone else out of self-defense because her fiancé had been raping and abusing her for years. Alas, the jury selected to convict a wealthy, tech billionaire is not the same jury they’d want to convict the victim of domestic abuse.

All the same, Price sees right through the lies, but again, Maroun has basically been positioned on this show to provide WTF reaction shots to the oblivious white guy. She’s like, “How do you know she’s lying?” and Price is like, “There’s no record of abuse,” and Maroun is like, “Yeah, so? Lots of victims don’t report their abuse.” Then Price tells her that he plans to go old-school and pick apart every allegation of rape and abuse, and she’s like, “You can’t do that?” and he’s like, “But she’s a pathological liar,” and she’s like, “Yes, she’s lied about everything else, but we don’t know that she lied about the sexual abuse.”

Then it gets real cringey. He’s like, “Are you worried about undermining the MeToo movement?” and she’s like, “Well, yeah, if we question the veracity of the rape allegations, we could set back the entire movement,” and then he’s like, “We don’t cater to movements! It’s our job to follow the law and get justice for victims!”

Please, will someone hire anyone under the age of 55 for this writers’ room? It’s like if Aaron Sorkin had to write a procedural after being hit in the head.

Ultimately, the show largely sidesteps the question of whether it’s copacetic to interrogate rape accusations because Nina Ellis makes the mistake of claiming that her fiancé broke her arm because she looked at another man. It is easy enough to disprove by bringing in an equestrian coach who witnessed Ellis fall off a horse and break her arm. The lawyers are able to secure a conviction based on that lie, and the episode is able to raise the issue of whether it’s OK to question sexual assault victims about those assaults without actually having to confront it thanks to a well-deployed Deus ex broken arm.

“The mantra is, ‘The victim’s truth is the only truth,” Maroun tells Price as they walk away from the courthouse. “Yes,” he replies. “As long as she’s telling the truth.”

An out-of-touch Law & Order worked fine when the rest of the world was out of touch. It’s struggling now, because it doesn’t want to be out of touch, but it hasn’t figured out how not to be yet.