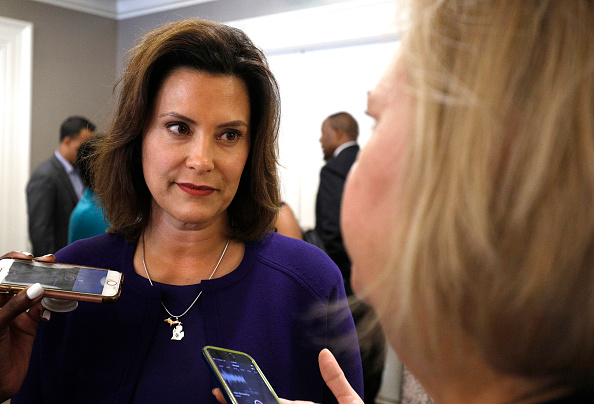 Trumpdates: Does Pence Have Coronavirus, Too (Probably Not)

6:40 — So, either Deadline knows something we don’t, or Deadline had prepped a post just in case (what with Mike Pence canceling his appearances tomorrow and his pink eye).

never forget and THANK YOU pic.twitter.com/g5jhyovFhC

The article itself says that Mike Pence announced “late Wednesday,” which suggests that they had it prepped last night and accidentally posted it today. Deadline probably just f**ked up. What we do know with certainty is that this is insanely dangerous. WTF?! They really, really, really don’t care about the health of their supporters.

4:50 — You think that Pelosi is trying to make a statement here?

New - Pelosi and Raskin to introduce bill creating a commission to review President’s health and fitness for office. This is what she was referring to when she referred to 25th Amendment. She’s having a press conference tomorrow pic.twitter.com/nCXxzyfG16

The fact that Trump is retweeting this maybe suggests that using the 25th Amendment may not be a bad idea. 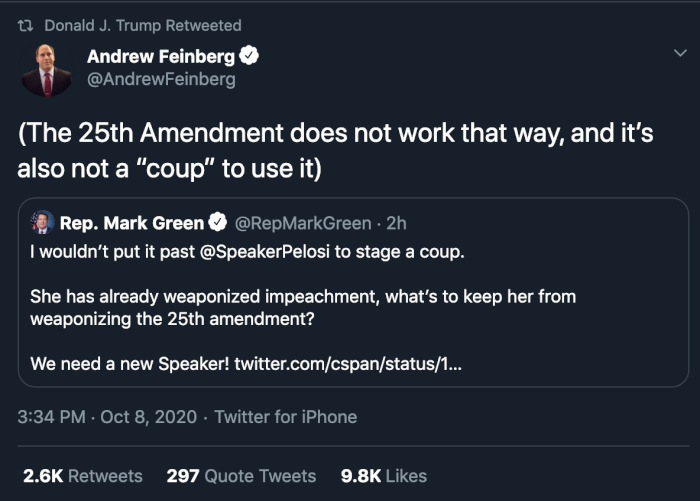 I’m sure this is entirely unrelated, but also, isn’t it fine to imagine!

4:12 — Earlier today, I sort of thought to myself, “Don’t put it past Trump Republicans to mythologize the militia members/terrorists who tried to overthrow Governor Whitmer the way they did Kyle Rittenhouse.” But then I thought, “Nah. Not even they would stoop that low.”

This is the beginning of that argument. This is greasing the wheels for November, after Trump loses, for Trump to wink-wink at the militia members to take to the streets. This is absolutely appalling.

Trump campaign official Jason Miller is on Fox News attacking Gretchen Whitmer, the victim of a kidnapping plot: "If we want to talk about hatred, then Gov. Whitmer, go look in the mirror — the fact that she wakes up everyday with such hatred in her heart for President Trump." pic.twitter.com/sMXv7mgBfa

2:22 — Trump — in front of an obvious greenscreen — is trying to win back the droves of seniors that have abandoned him over his pandemic response. He’s gonna get them all the Coronavirus medicine they want for free. He’s just gonna back up the truck with all the medicines, y’all.

TO MY FAVORITE PEOPLE IN THE WORLD! pic.twitter.com/38DbQtUxEu

Your dad wants to fuck your sister. https://t.co/CUQob4w8yv

Also, did we know that Richard Marx and Daisy Fuentes were married? Holy 1989, Batman!

How dare you lecture us from your beach house in Malibu!!!!! https://t.co/8Jyl24qPtc

1:10 — Rather than do the virtual debate, Trump is trying to postpone the second debate.

Trump campaign now calling for one-week delay in the remaining two debates, Oct 22 and 29, instead of doing the Oct 15 one from remote locations.

The Biden camp rejects that move.

Biden campaign: “We accepted the three dates — Sept. 29, Oct. 15, and Oct. 22 — in June. Trump chose today to pull out of the October 15th debate. Trump's erratic behavior does not allow him to rewrite the calendar, and pick new dates of his choosing.” pic.twitter.com/kDs0tOHZQm

1:05details on the attempted coup of “Big Gretch,” which I believe is an affectionate nickname Michiganders have for their (popular) governor.

Members of a militia group purchased weapons, conducted surveillance, and held training and planning meetings, but were foiled in part because the FBI was able to infiltrate the group with informants, according to charges officials planned to detail Thursday.

12:05 — WTF! WTF! “The FBI says it thwarted what it described as a plot to violently overthrow the government and kidnap Michigan Gov. Gretchen Whitmer, and federal prosecutors are expected to discuss the alleged conspiracy later Thursday.”

More details on that arriving at 1 p.m.

— Remember when Trump went to Walter Reed last year, for reasons that have not yet been explained? He made his doctors sign an NDA, and the two doctors who refused to sign the NDA were not allowed to treat him. That is to say, we have NO idea what the President’s health is like.

— How irresponsible is this administration? Chief of Staff Mark Meadows held 70-person indoor wedding for his daughter in Atlanta last May. No one wore masks, and it happened during a time in which no more than 10 people were allowed to gather together in Georgia.

— That’s particularly prescient in light of the fact that USA Today estimates that Trump and the White House may have exposed thousands of people from Atlanta to Minnesota to the coronavirus last week.

11:15 — I have to mention this because I get such a kick out of it. These yard signs have started popping up all around my city over the last few days. 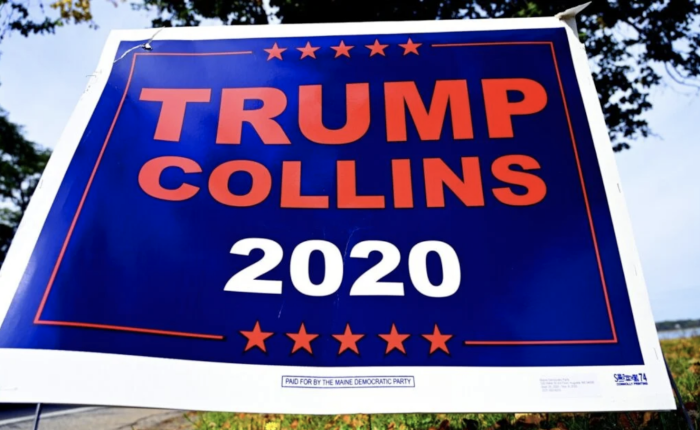 I hadn’t really noticed them that much, because three weeks before an election, there are so many yard signs that it all becomes noise. The twins, however, pointed one out to me yesterday on the way home from school. “Trump and Collins? Ewwww!” they said. “Why is Collins running with Trump?” And I thought, “Well, that’s a weird sign. I don’t know how effective that’s going to be in a very progressive city like Portland, but I guess there must be a handful of Trump/Collins in town. Ewww, is right.”

As it turns out, those signs are actually paid for by the Democratic Party, which wants to ensure that voters in Portland link Collins to Trump. The Collins campaign called it “petty.” I call it kind of genius.

9:40 — Trump does what he does, and he wiped the news of the debate clean away with one phone call this morning. But I do want to return to it for a bit and at least point out a few things, beginning with Trump calling Kamala Harris a “monster” this morning. Twice. In a real ugly way.

Trump refers to Kamala Harris as "this monster" pic.twitter.com/hcnUpV8PBf

Trump is getting his ass kicked this time around because he’s lost the support of the over 65 crowd and also, obviously, suburban women, who are thought to be the squishy center of the political spectrum. Calling Kamala a “monster,” doesn’t help, and Pence interrupting Kamala last night certainly didn’t help, either. He basically lost any hope of winning over female voters right here:

The polling after the debate bears that out, too.

Kamala Harris won the debate among men by 2 points, and women by 34! pic.twitter.com/082vfABO73

If you do that poorly, and the top of the ticket comes on a morning show and calls Kamala a “monster,” how do you not understand why you are losing so badly?

Donald Trump’s decision to call Kamala Harris a “monster” is a depressing statement about his understanding of his base of supporters and what they want to be told about the first Black woman to be a major party’s vice presidential nominee.

Finally, I don’t mean this necessarily as an insult, but Pete Buttigieg is a bit like the Democratic Mike Pence, not in his politics, obviously, but in the way he can shiv you in the stomach while looking you in the eyes pretending to be your friend. Someone called this “Midwestern nice.” I think that’s how to describe Lainey when she’s kindly going over my typos with me.

8:55 — Here’s the campaign’s official statement on pulling out of the debate. They said that they will opt, instead, to do a rally.

Trump threatening to infect more people if he doesn't get his way with the next debate. pic.twitter.com/lQ584xqVkq

As for the rest of the morning’s Fox Business interview: Basically, he spent most of it talking about how healthy he is; downplaying the Coronavirus; saying he didn’t really need any treatment or hospitalization; and saying that he’s still on steroids. Then he went long on 2016 grievances. He expressed displeasure with his two most loyal cabinet members — Mike Pompeo and Bill Barr — for not prosecuting Hillary Clinton, and I kid you not, he spent a great deal of time in that interview on Hillary’s emails.

Meanwhile, we know what to expect from Donald Trump. This is Maria Bartiromo, a news reporter for a business channel. How does she go on after Trump loses?

Fox's Maria Bartiromo to President Trump: "If [Democrats] cheated in 2016, they're going to cheat again! How are you gonna stop this and ensure that you have the wherewithal to fight back if it's all ballot lies? Joe Biden has 800 lawyers. 800 lawyers." Trump rants about lies. pic.twitter.com/w3Lm8tERHv

8:36 — We have a lot to talk about this morning, and I’m going to get to last night’s debate shortly, but as Trump is prone to do, he insists on all the attention, which is why he had a phone call with Fox Business this morning to turn the attention away from the Vice Presidential debate and back toward himself. First up: The Debate people decided wisely that the second debate would be virtual, on account of the President having a highly contagious disease. Also, it makes more sense, because it will actually allow Joe Biden to speak without the constant interruptions. Joe Biden thinks it’s a fine idea.

Biden camp’s @KBeds on virtual debate: "Vice President Biden looks forward to speaking directly to the American people and comparing his plan for bringing the country together and building back better with Donald Trump's failed leadership on the coronavirus…"

Trump does not think it’s a good idea because it would hamper his ability to interrupt the Vice President when he says something that Trump doesn’t like.

"I'm back because I'm a perfect physician specimen," Trump claims, before falsely describing Regeneron as "a cure" pic.twitter.com/UjecdXEC4F

He also says that he didn’t need any medicine to fight off COVID while also saying that he’s going to give emergency authorization to the experimental drug that he took.

Trump on Fox Business this morning says he probably didn’t need any medicine to fight Covid-19.

He’s still on the steroids.

Trump on if he's still on medications to fight Covid-19: "I'm almost not taking anything."

"Go a little bit longer on the steroid," he added

But not a heavy steroid. Ahem.

More in a few minutes.

Reminder: We use photos of Kate Beckinsale in lieu of Donald Trump for aesthetic and superstitious reasons. Michael Ealy is just a happy bonus.

← 10 Tantalizingly Terrifying Movies You Can Watch At Nightstream | Review: FX's MacDonald Murders Miniseries 'A Wilderness of Error' Is Highly Bingeable →