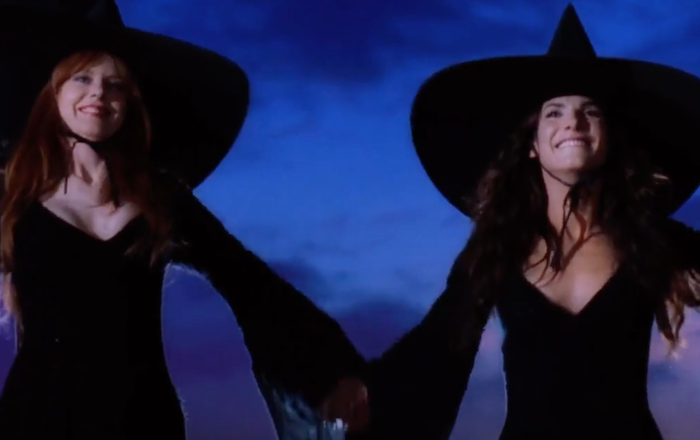 I love the movie Practical Magic, so any sort of commentary I have on it is basically just rattling off highlights of it, and in particular talking about the drunk margarita scene, which is a classic.

Or the witchy-Stevie Nicks soundtrack, which is perfectly suited to the entire movie, and hanging out in your PJs drinking midnight margaritas.

…but really what I love most about this movie is that it’s about the relationships we have as women, and the connections that endure despite differences and periods of separation.

Anyway, the whole point of all of this is that it was announced earlier in the week that there is going to be a Practical Magic series called The Rules of Magic on HBO Max, and if you weren’t going to sign up for the service before, I hope you will, now!

Rules of Magic will be based on Alice Hoffman’s novels Rules of Magic and Practical Magic, the latter forming the basis for the 1998 film of the same name (starring Sandra Bullock and Nicole Kidman). Set in 1960s New York City, the series revolves around siblings Franny, Jet, and Vincent Owens who discover that they share the family heritage of descending from a powerful line of witches. Series creator Melissa Rosenberg (Jessica Jones) will executive produce the series under Warner Bros. TV and her Tall Girls Production banner, and will write the script.

If this series is half as great as the movie, I’ll be pleased.

Franny and Jet as I’m sure you’ll recall are the names of the aunts in Practical Magic (played by Stockard Channing and Diane Wiest) and since this show is supposed to take place 30+ years before the events of Practical Magic, the movie, the chances of Sandra Bullock and Nicole Kidman reprising their roles as Sally and Gillian, respectively, are slim. Although never say never!

Anyway, we have a bit of time until this show premieres, so you have more than enough time to squeeze in a few more (dozen) Practical Magic viewings until there’s new Practical Magic-related content to enjoy.

Don’t consider that a drawback, here, friends. Embrace it. That movie is truly great.


← New Jersey Woman Burns A Pennywise Doll That Floated Into Her Yard | She Was on a Break: Robert De Niro is Suing an Ex-Employee Over Watching 'Friends' Re-runs At Work →