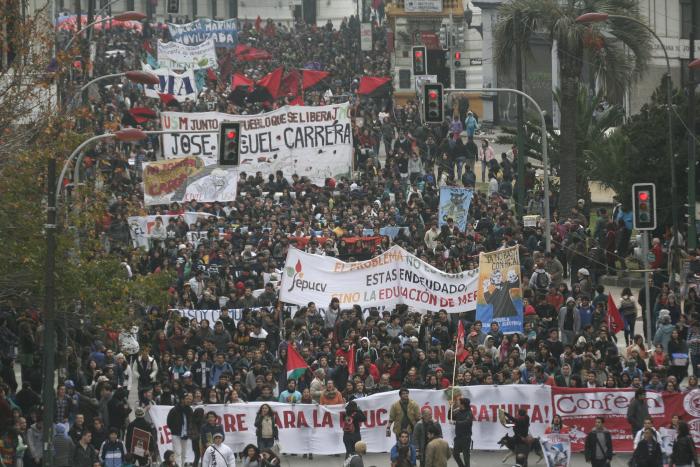 It Will Take a While, You Know?

Last August 4th was one of those anniversaries that is a multiple of two and five, ten years from a since, and there’s not enough overthinking about the cultural construct of time milestones that won’t have me saying: Oh shit! It’s been that long?

2011 saw the first major wave of protests in Chile since the waning years of the dictatorship. Well, technically there were the ones in 2006, but those were a preamble to that first act. And the movement was lead, once again, by students (it’s always the students, it always has to come from the students), the organized student’s federations from several universities and high school. In short, they demanded a systemic rehaul of public education, in terms of funding, quality, curriculum (incorporating gender issues and interculturality), democratization, and participation of students in decisionmaking and free university tuition. It’s fair to say that the latter part became the main selling point.

The protests, starting around May, were a surprising success. Before that, a march could be considered a massive success if it drew 10,000 people… all over the country. That’s what a dictatorship does to you (ironically, the largest marches ever happened during that period). The first one in May drew in about 30,000 only in Santiago. Week after week, they grew in size until they usually crossed 200,000 protesters in the capital and twice that all over the country. At the same time, hundreds of public high schools throughout the country went on strike alongside several public universities, which was actually a common sight since the dictatorship. For the first time, they had a clear and concise (if radical) goal, one that made sense and, troublingly for Chile’s economical elites, had the overwhelming support of the citizenry. They were steadfast, too, going past the winter holidays and into the second semester.

On the other side was the first administration of President Sebastián Piñera, the first right-wing government since the return of democracy, back then in his David Cameron phase, posing as a traditional liberal, who was soon to retreat to the authoritarian neoliberalism that comes more natural to the Chilean right. The government reacted with police repression, as usual, and with some sh*t ass counterproposals, actually putting an effort into pretending they wanted to meet us halfway. It was as if transforming the educational system wouldn’t undermine how Chile’s elite had comfortably ran the country since … its independence.

August 4th would be the first major march of the second semester, except it wasn’t authorized by the government. Did I mention that marches have to be authorized by the government in Chile? Well, by the local authorities to be more exact, but until recently, those were designated by the central government. I don’t want to waste any lines debating if this is right or wrong (it’s mostly wrong), but regardless, protests find a way.

On August 4th, the capital’s main square (the starting point for most marches) looked like an obstacle course of blockades and fencing. Police Galaxy Brain: protesters can’t fire up a barricade if you build them yourself. People much braver than me went into the streets that day, as the student’s federation decided to press on, and they were met with a taste of the brutality we would experience eight years later, including tear gas canisters being fired from helicopters. At the same time, the government threatened to declare a state of constitutional exception. They got to fulfill their dreams eight years later too, around the same places.

That gave us another kicker. Cacerolazos begun ringing all over Chile, public discontent grew and for the first time in decades, a majority of faculties at the elite Catholic University of Chile went on strike (think all the Ivy-leagues/Oxbridge combined, but more elitist and much more conservative). It wasn’t just hippies and anarchists at the raggedy public universities, it was the posh kids too, at the cultural heart of the elite. A slight majority at least.

All of that helped maintain the state of agitation throughout Piñera’s first administration, as several other movements gained visibility and legitimacy: Feminism, LGTBI+ rights, the recognition of Indigenous People’s, Environmentalism. Each and every single movement came to the same conclusion: No substantial change could happen without getting rid of the Constitution imposed during the dictatorship precisely to maintain forced stability (through misrepresentation in Congress) and fossilizing an extreme neoliberal system. It had barely been changed because it was written to be as hard to change as possible. The notion of a Constitutional Assembly begun gaining traction and became mainstream. Even as it was derided by people on the left.

Those movements and demands were picked by Michele Bachelet’s second government, who managed to make some serious reforms and kickstart the drafting of a new constitution … until she was kneecapped by factions within her coalition. Still, new left-wing movements and parties gained traction, and several members of that generation of Millennial, student leaders were elected into Congress. One is currently a frontrunner for the presidency. Story for later.

Then Piñera was reelected for a second term, because we Chileans suck at overcoming toxic relationships, in the personal and in the political. It seemed as if this period of agitation went into neutral, with Piñera now pivoting to the far-right (aping the orange ape). Until it didn’t. Lo and behold, we are currently in the process of drafting a new constitution. Good work Piñera!

It’s been ten years, at the very least. And only now we are beginning to see the possibility of a better country. And even though we had several disadvantages (for starters, the media and press are overwhelmingly controlled by the elite. CNN Chile are the stalwarts of progressivism here, go figure), several things helped this political and social process: A long history of left-wing movements and organizations, from the parties to the grassroots; the constitution and the legacy of the dictatorship were pervasive and dissolved the social fabric… but only 40 years old at max; a demographic dividend that happened to coincide with the generation that didn’t live under the dictatorship (or was too young during its final years). This process is far from over.

Now consider the United States, and to a different degree, the United Kingdom. When your political system is stuck in the 1800s, with a parliament elected with a system that hasn’t changed since the 1700s; when, until recently the words “socialism” and “welfare state” were considered blasphemy… in blue states; when a majority of Congress is dominated by boomers and even older; when way too large a cohort of people are white evangelicals; when way too many people consider it natural to live in sh*tty, generic-looking cities where you can’t even fucking walk and need a fucking car to get anywhere; when basically you are a nation of nations, where the things that unite you are weaker than what divides you; when any legacy and tradition of left-wing thinking has been suppressed and left you not even a language; when the health system makes no moral or economic sense; when Universities are islands of knowledge that barely participate actively within society, and I’m not just talking about those that are built around a football team or Greeks; when only recently Millennials have started joining politics and high school students begun marching just not to get shot… considering all that, isn’t it reasonable to think that transforming the US is going to take a bloody while? A bloody while that, even in 2011, before the advent of the orange f**k and the GOP going full KKK, triggers a loop of despondency and anxiety, because that bloody while might not be short enough for what our times demand?

And precisely because of that, what about shorting the patterns of logic your brain will take, and use it to feed a realistic optimism? Reroute anxiety into things that drive political action (mostly anger, but also energy, stamina, and stuff) and keep the perspective of the scope of the challenge, and measure it against not the size of the progress, but the strategic wins. Focus your energy there, on the critical foundations of an unjust system. In Chile, that step was reverting to a proportional electoral system. In the US, of course, it’s the filibuster. Just give Manchin, I don’t know, a Boeing factory in Worst Virginia.

Because this will take a while. But that comes with an upside: realizing, in hindsight, that radical changes can happen faster than you expect. Ten years ago, a new constitution, the way we are drafting it, seemed like… well, like the kind of thing that would take ten years to take place. Same thing with a renewed welfare state. Same thing with electric cars. Same thing with youth activism.

Optimism is something you have to build, as opposed to a default mindset, so typically American. In a practical sense, that means asking what’s next. Constantly. But taking into account what’s in the bag.

In political terms, it means getting the youth into elected office, more and more. It’s not that Millennials and Zoomers are any more virtuous than other generations, we all know Boomers thought themselves that and look the mess they have made. It’s just that there is less mileage on us. This is an awful thing to say, but in Politics, seniority is overrated. Or at least, politicians need to improve and self-actualize themselves regularly or be moved. That’s why Bernie Sanders of all people woke up something in the youth, and Nancy Pelosi, the same age, is an eternal source of frustration. Of course, with this I am referring to Democrat party politics. The other ones are hopeless.

Around that time, a video made the rounds of a young Spanish activist demanding the left-wing parties make room for the youth. Yeah, that’s not a thing. You have to snatch it from them. That takes a while. It will take years. At least a generation in the USA. But that’s a certainty, and a certainty can easily be turned into a roadmap. And a roadmap is a scaffolding for real optimism. It’s hard, but not impossible.

← The IPCC Delivers a 'Code Red' Warning On Humanity and Climate Change | Theo James Makes a Case for the Bland White Voice Actor in 'The Witcher: Nightmare of the Wolf' →