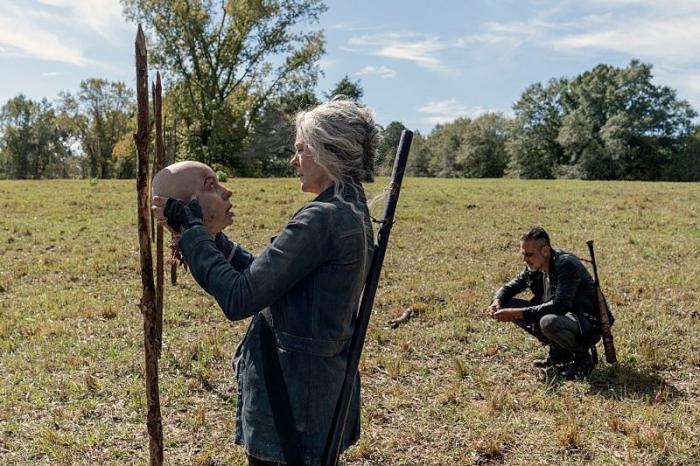 Previously on The Walking Dead: Michonne (you remember her, right) accompanies Virgil to the island in order to gain weapons that will help her against Alpha and the Whisperers, only to discover that Virgil hasn’t been completely honest with her about … well, anything and ends up being trapped, fighting for her life as a result, and experiencing several minutes of pointless hallucinations before finding clues that convince her that Rick is still alive, and deciding to leave Judith and R.J. in Daryl’s care in order to find him, find out if he’s still alive, and bring him back home.

THE STORY SO FAR: Despite the fact that Negan slit Alpha’s throat and cut off her head, Carol isn’t entirely happy with how long it took for him to do what she asked and get it done, so she’s not exactly in a rush to tell the people of Alexandria what he did on their behalf. Ezekiel, Eugene, and Yumiko head on out to meet up with Stephanie. Negan is held captive by Daryl, who doesn’t believe him when he says that Alpha is dead, and that he and Carol worked together to make that happen. Beta doesn’t respond very well to discovering Alpha’s severed head on a pike in their territory.

WHAT’S GOOD ABOUT THIS EPISODE?: Beta’s furious response to a fellow Whisperer proclaiming him to be the new Alpha, along with getting a closer look at the man and musician he used to be before the Walker Apocalypse became a reality. Negan getting a little bit of his swagger back at the sight of the Whisperers referring to him as the new Alpha and taking Daryl captive, followed by Negan deciding that his loyalty was not with the Whisperers and helping Daryl kill them instead. Negan and Daryl’s conversation, in which he explains that as much as he enjoyed the respect and belonging he felt while with Alpha and the Whisperers, he had his limits on what he was willing to do as part of their ranks, which includes killing children and killing those who don’t deserve it. (And no, Daryl didn’t respond to that by bringing up what Negan did to Abraham and Glenn.) And the very first appearance of the incredibly upbeat, assault rifle-toting Princess, played by Paola Lázaro, which came right after Ezekiel laughing his ass off at her choices on how to decorate the Walkers cuffed and tied up around town in order to bring some beauty and normalcy to her surroundings.

WHAT’S NOT SO GOOD ABOUT THIS EPISODE?: Negan holding onto the Idiot Ball a little too tightly when he chose to not take Alpha’s head off of the pike, put it back into the burlap sack that he used to bring it to Carol, and instead walk straight to Alexandria and deliver the news himself about what he did, how he did it, and who he did it with, instead of waiting on Carol to do all of that for him. And yes, it’s good to have one more episode of Samantha Morton-as-Alpha, but all of her scenes of her haunting Carol came off as nothing more but an excuse to keep her around onscreen for a little bit longer.

IS NEGAN IN THIS EPISODE?: Well, obviously.

CAROL?: Yes, and she finds herself taunted constantly about all of her losses by the spirit of Alpha, to the point that she loses focus and is nearly killed by Walkers as a result.

IS DARYL STILL ALIVE? BECAUSE IF NOT, THEN WE’LL PROBABLY RIOT IF WE HAVE NOTHING BETTER TO DO: Still alive, despite being ambushed by Whisperers who end up getting killed thanks to Negan and his Mad Max-like proficiency with a double-barreled shotgun.

ARE THE WHISPERERS IN THIS EPISODE?: Yes.

TO SUM IT ALL UP: A somewhat decent episode that could’ve been a little better, but was still more enjoyable to watch than Michonne’s farewell episode last week.

This episode of The Walking Dead has been brought to you by “What About Your Friends?” by TLC: