Exploring The Economic Realities Of 'Snowpiercer'

Snowpiercer is a 2013 film from Academy Award winner Bong Joon-ho, based on a French graphic novel about a future-dystopian, perpetual-motion train carrying the world’s remaining survivors after a second ice age. (It might be a sequel to Willy Wonka and the Chocolate Factory.) Snowpiercer is also a 2020 TV show from TNT that might be closer to a bottle mystery (no word yet on its relation to any Wonka properties). I am your friendly neighborhood spoiler here to tell you everything wrong with the things you love. It’s what I do. I ruin things. I’m a ruiner.

Now, I’m not totally terrible (please do not confirm that with friends and family), so I’m not interested in ruining everything about the show. I just want to ruin everything about the way the show addresses class, wealth, and class warfare and oppression. This should only be *checks notes* like seventy-five percent of the show. (The remaining twenty-five percent is everything Daveed Diggs is doing). So yeah, I might be taking a substantial swing at the show.

It’s not that the movie version didn’t address social and wealth inequities, it’s just that it stated them as fact and continued moving. There was a short story I read years ago that I don’t remember the name of now, but it basically started with you, the reader, as the main character waking up in hell. I don’t remember a lot of what happened next, but I remembered loving the shit out of that premise. I got a similar feeling from Snowpiercer. The train just exists, we are on the train, the train operates in these ways. Start a rebellion. We accepted the surreality of it because it didn’t actually matter that much to the point of the story (also because Bong Joon-ho is sort of fucking bonkers in a great way). The show has needed to flesh out elements of the story that were accepted in the movie, and that’s lead to a lot of viewers (mostly me. Because I’m a ruiner) thinking, “Well that’s not how that works.”

What specifically is not how that works?

1) No One On The Train Wouldn’t Have A Job

The show would have you believe that if they were to get jobs, they’d be allowed to see the front of the train, which would give them valuable intel for their rebellion. A rebellion that they’re forced to carry out because Mr. Wilford makes them live in deprivation and sickness at the very back of the train. Which he has to do because if he allowed them to live and work places other than the tail, they’d be able to bust out of the tail during a rebellion caused by the fact that they can’t leave the … Hold on, I had this. There’s just no reason not to allow Tailies to be incorporated into the rest of the train, even if Wilford wanted to keep them as the lowest cast. The disgusting food bars that the guards serve to the Tailies? Someone has to make those. And someone else needs to produce the things that are grown to go into the disgusting bars. And someone else needs to make sure that the machinery used to produce the gross-bars is in good working order, and someone else needs to make sure that the people making and maintaining the gross-bars are themselves fed and taken care of. Why is Wilford bothering to keep the Tailies alive and connected to the rest of the train only to oppress them? Especially considering that within his perfectly balanced train, the Tailies would represent a strain on the system that he hadn’t factored in? Which is incredibly important to the show because …

2) The Train Is A Closed System

In the last two episodes, the train has been referred to as both a small town and a very tall building (you know, those buildings that are 1,001 train cars tall). But it’s not. It’s a closed system. All of the resources Snowpiercer will ever have are already currently onboard, and Wilford is refusing to use a full car of resources in the form of actual people who could be doing actual jobs and learning actual things to make the train run better. This means that every time Melanie Cavill (Jennifer Connelly) goes on and on about how perfectly in-balance every single thing on Snowpiercer is, how interconnectedly everything depends on the other, and how any small glitch in the system brings the whole train down, she’s either acknowledging that the great Mr. Wilford planned to have a hundred or so stowaways or she’s completely full of shit. (If I were a nitpicky person, this is where I’d also question why it is that Mr. Wilford built an entirely empty train car at the very back of the train with nothing except bunk beds for a group of people he totally didn’t expect on the train, but I’m not that kind of person.)

There’s also the very large fact that if Mr. Wilford anticipated having 100 extra people on board and intentionally chose to make them unproductive captives on the train, he also intentionally made other members of the train produce more to accommodate that fact. In a closed system, every resource needs to be recycled (so yes, you’re eating human waste again). But you also need to put in as much as you take out overall in the system. If people on the train are being given resources, they also need to produce equivalent amounts in order to keep the train in balance (I’d clearly prefer a system of giving to those as much as they need rather than as much as they make, but we can argue about that later). It doesn’t need to be on an individual level, but on the whole, people need to replace what they use. Which again, means that either the show is completely full of shit when they talk about the delicate balance of the train, or Mr. Wilford intentionally designed the train for the purpose of imprisoning a class of people and oppressing them. “But, Emily,” you might be saying because you don’t know how an internet article works, “we have that in real life. Why not on the show?” And the short answer is …

3) Wealth Doesn’t Exist On The Show

The reason we have a wildly oppressed, and often imprisoned, lower class in the U.S. is, for a number of complex and shitty reasons, because the wealthy make money off of it. And wealth on Snowpiercer, for all intents and purposes, doesn’t exist. There are material goods and people exchange things for those goods. But because of the nature of the closed system, there’s only so much you can actually do with those goods. The wealth associated with the larger world is gone. The banks, currency, and governments associated with that wealth are gone. There is only Snowpiercer, and Snowpiercer doesn’t have a stock exchange.

Take the Folger family. These assholes. 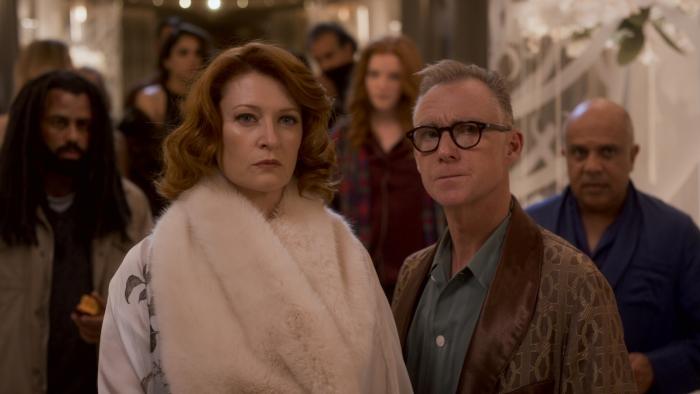 In the most recent episode, Mrs. Folger reminds Melanie that she and her family’s wealth built Snowpiercer and paid for their tickets aboard so they won’t tolerate mistreatment. But here’s a thing: Why not? Why would Melanie give a single fuck what Mrs. Folger thinks of her train now? Does Mrs. Folger have a large number of first-class tokens? That she can use to purchase items that Melanie stays awake 18 hours a day to make sure are produced? Is Mrs. Folger going to tattle to Mr. Wilford? The one that only Melanie gets to talk to and Mrs. Folger hasn’t seen in years? I get that what I’m about to say might seem cruel, but human interactions, at their most base level, are transactional. I don’t mean that in a bad way. I like someone so I’m kind and amusing to them, and then maybe they like me back. It’s sweet but transactional. They have something I want (their affection) so I try to give them something they want so they’ll give it to me (I usually offer swears and dick jokes, but I’m also willing to supply drugs). If the Folgers want something that Wilford and Melanie can provide (first-class treatment), what do they have to exchange for it? The fact that they paid for the train seven years ago? If your boss told you they paid you last quarter so you better show up early tomorrow, would you do it? And what’s Mrs. Folger going to do if Melanie doesn’t treat her well? Hire a lawyer for breach of contract? Sue to get her money back? Write a bad review on Yelp? “Service on the perpetual-motion, Noah’s Ark train was terrible. 0 out of 4 stars. Would not ride again”?

Which is only part of the issue. The wealth of the before times doesn’t exist anymore, but neither does the supply. You can’t just buy more and more yachts on Snowpiercer. If you’re lucky, you could maybe score some superior drugs. But even hoarding wealth (the sign of the truly sociopathically rich) doesn’t work. The most recent episode opened with a speech about how everything is traded on Snowpiercer for something you want. If the Folgers had all of Rembrandt’s works and no one onboard wanted or could afford them, what’s the point? What good is it to be fabulously wealthy when you can’t accumulate more things (because it’s a closed system) and you can’t influence people because your relative wealth holds no power? Why the f**k would Melanie let a bunch of entitled (but not rich) assholes sit around her goddamn train all day doing nothing when they have absolutely nothing left to give her in return? Why the hell don’t you trek your tight-ass down to the Tail to deal with the uprising, Mrs. Folger? Ya freak bitch.

And I’m sure by this point, someone is commenting that I’m missing the point that Wilford and Melanie are intentionally creating different classes in order to use class strife to better control the train. Which only makes sense if they also allow for a certain amount of social mobility. But they don’t. The leaders of Snowpiercer seem to have taken the worst elements of a classist, capitalist society (and there are a lot), and removed the only parts that act as motivators. The Tailies don’t have any reason not to rebel if they can’t escape the Tail under other methods. Third-class doesn’t have any reason to hate the Tailies if they can’t ever enter second-class. And second-class wouldn’t give a rats ass about aspiring to become first-class if they not only aren’t allowed to become them but are only allowed to see them on special occasions. Without the lie that you too can become not-fabulously-wealthy-but-treated-preferentially-for-other-reasons, people don’t uphold the class system. They tear it down. I can actually accept that a totally batshit, genius billionaire with a technology obsession would knowingly create a harmful society (is there a Jeff Bezos joke somewhere in there?), but not that that same genius would so wildly misunderstand basic human nature. If for no other reason than it completely f**ks with the balance required to make his zoom-zoom train. The show can either say he was a visionary who helped escape the end of the world or that he was a f**k up who has no idea how economics work. But saying both ruins the show.


← White Celebrities and the NAACP Team Up for an 'I Take Responsibility' PSA | Briefly: The True Story Behind Bravo's 'Dirty John: The Betty Broderick Story' →