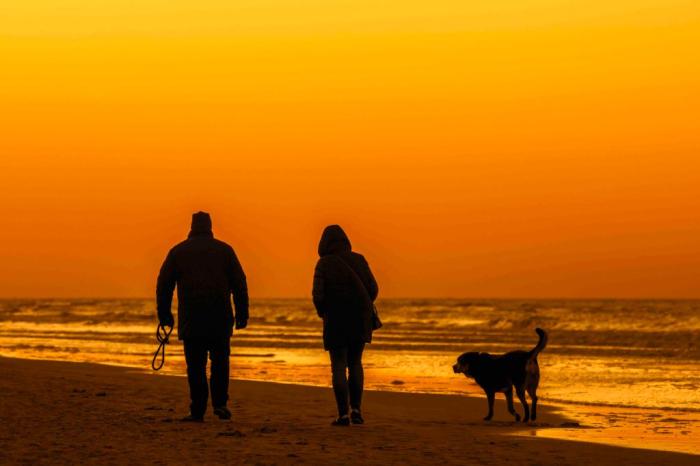 Reddit Asks the Question: 'People Who Don't Ever Want To Have Kids, Why?'

It’s been an issue long-gestating in my mind, whether to have kids or not. Currently, I think I’m at about 75/25 in favour of not. I’m lucky enough to have a partner who feels roughly the same way. At 33 years of age, the trickle of friends who are either having kids or planning on doing so is now slowly becoming a stream, and while I couldn’t be happier for them and wish them all the best with the endeavour, there’s also a part of me that recoils at the thought of going through the process myself. I’ve never bene particularly keen on the idea. Who knows—maybe in a few years the dam will break and I’ll feel the overwhelming need. But for now, the arrow is very much deeply embedded in the NO KIDS part of the swing-o-meter. My main reason for that? Regular readers will be shocked to hear it. It’s climate change. I suffer from a great deal of anxiety over the state that capitalism and industry has brought the world. It’s bad enough to think how I’m gonna weather the storm. It’s even worse to think how more vulnerable communities around the world are gonna fare. It would be borderline panic attack inducing to imagine bringing a soft-headed, hopeful baby—eyes round and wide and already imagining the boundless possibilities before it—into a world it would mature into understanding was doomed by the actions of the generation that preceded it. No thanks.

I mean, that, plus I also really don’t fancy the idea of bringing something into existence that will mercilessly reorient my entire world around its needs and desires for god knows how long, dissipating my priorities and passions in an instant with a banshee’s wail. Don’t get me wrong—I’m sure it can be the most rewarding thing a person can do.

But also: Nnnaaahhh. I’ll probably just get a dog.

Anyway, Reddit pondered this very issue the other day when it asked the question: ‘People who don’t ever want to have kids, why?’ It was nice to read through the thread and feel less alone in this still often-unspoken life choice. You can check out the full thing here, but below are some highlights: 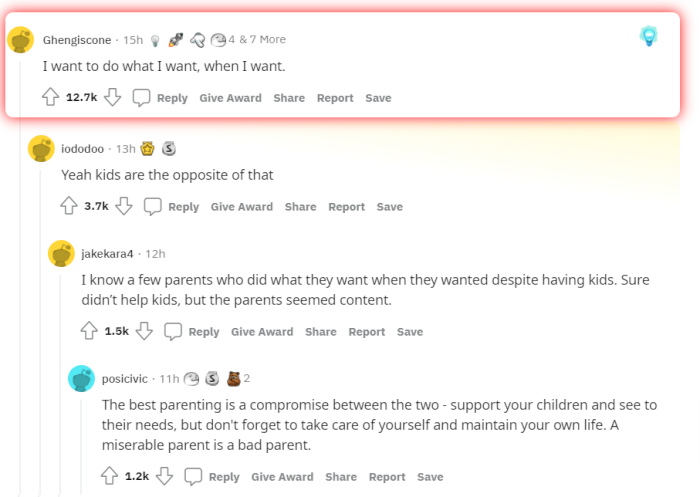 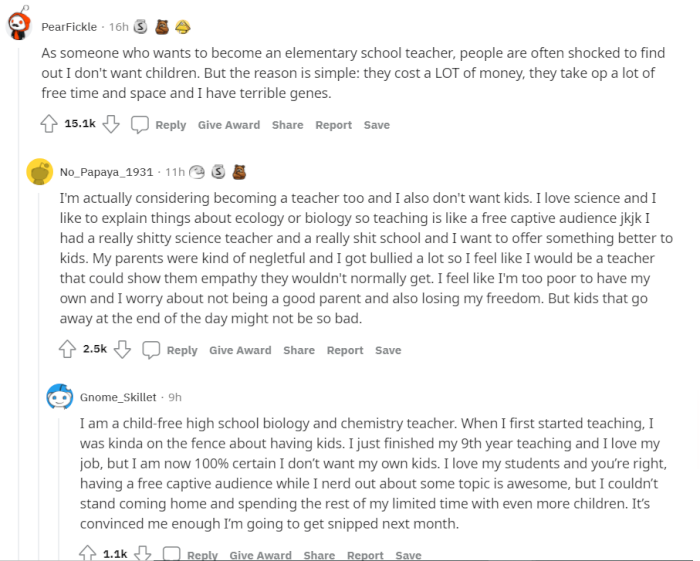 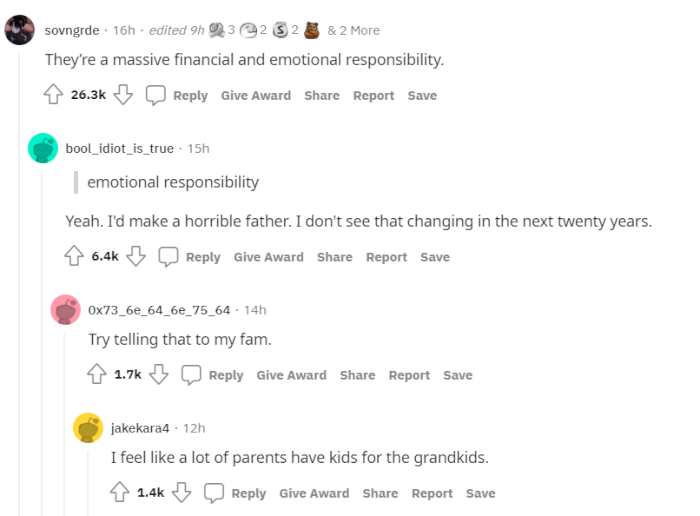 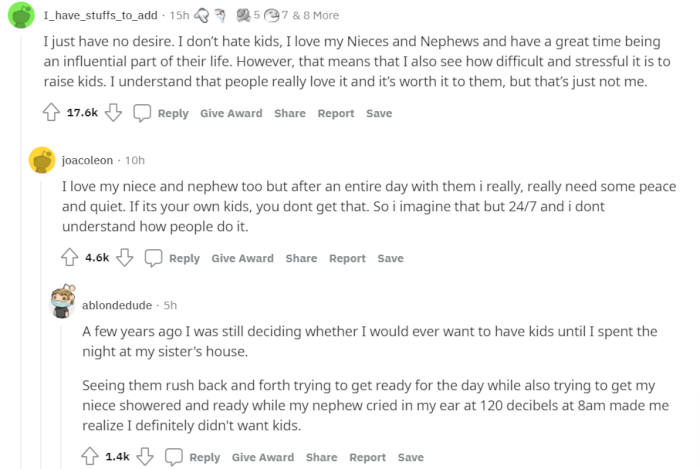 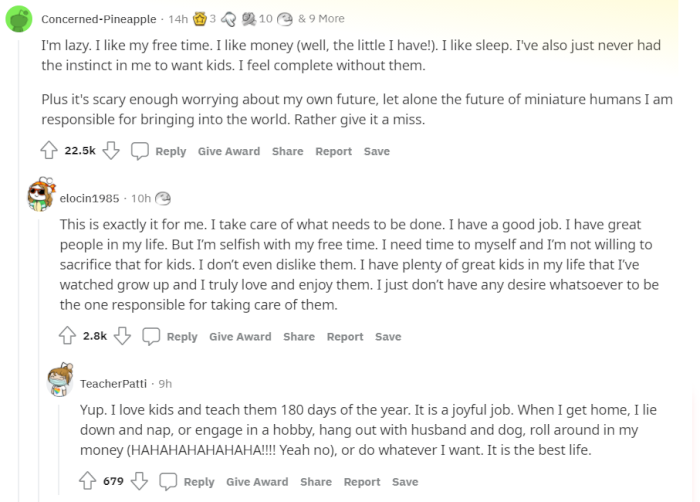 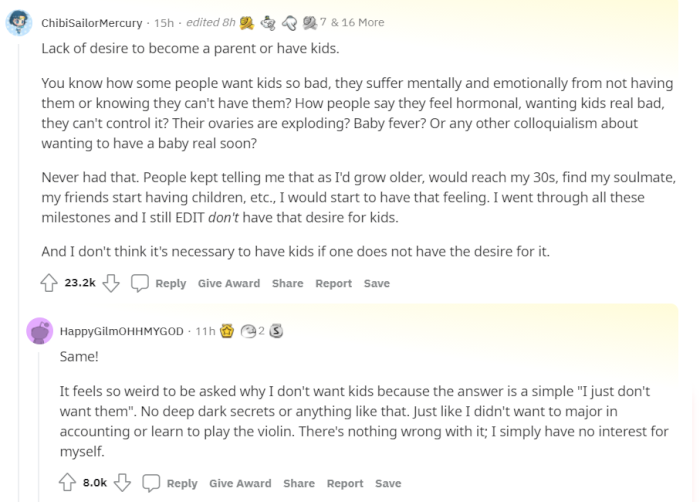 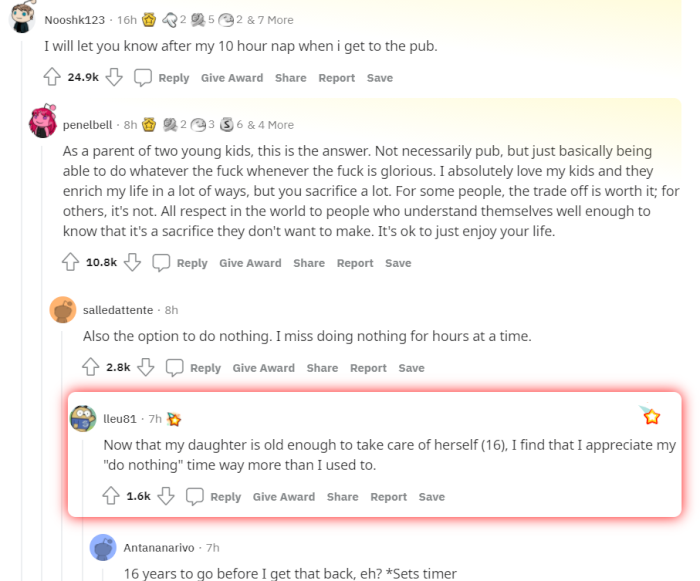