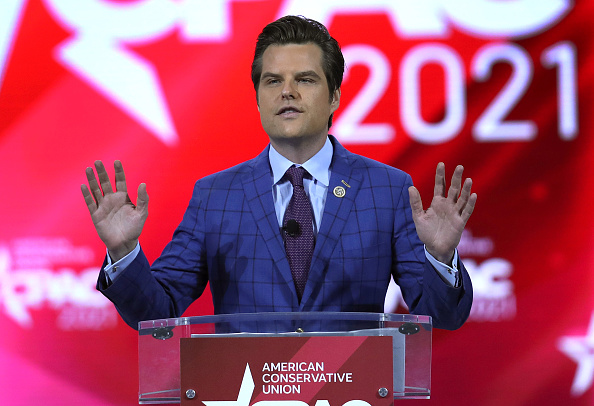 The Matt Gaetz investigation is getting messy, and honestly, it couldn’t have happened to a more deserving guy. As far as the legal details go, the New York Times has seen text messages and payment receipts proving that Matt Gaetz and another (indicted) Florida politician recruited multiple women online for sex. The guy who was indicted — Joel Greenberg — was indicted on federal sex trafficking charges. He met “women through websites that connect people who go on dates in exchange for gifts, fine dining, travel, and allowances.” One woman allegedly had sex with both men, in addition to a third Florida Republican.

This is apparently in addition to the investigation into the 17-year-old girl Gaetz allegedly slept with, although Greenberg is under indictment currently for having sex with the same 17-year-old girl.

There are receipts, as they say.

The Times has reviewed receipts from Cash App, a mobile payments app, and Apple Pay that show payments from Mr. Gaetz and Mr. Greenberg to one of the women, and a payment from Mr. Greenberg to a second woman. The women told their friends that the payments were for sex with the two men, according to two people familiar with the conversations.

In encounters during 2019 and 2020, Mr. Gaetz and Mr. Greenberg instructed the women to meet at certain times and places, often at hotels around Florida, and would tell them the amount of money they were willing to pay, according to the messages and interviews.

One person said that the men also paid in cash, sometimes withdrawn from a hotel ATM.

Some of the men and women, including Gaetz, also took ecstasy before sex. Gaetz also asked the women to find other women with whom he and his GOP pals could have sex in exchange for payment. It’s always the most righteous people, isn’t it?

Gaetz has not been charged with a crime. Yet.

All of this syncs with the impression of himself that Gaetz gave his GOP colleagues in the House. From CNN:

Behind the scenes, Gaetz gained a reputation in Congress over his relationships with women and bragging about his sexual escapades to his colleagues, multiple sources told CNN.

Gaetz allegedly showed off to other lawmakers photos and videos of nude women he said he had slept with, the sources told CNN, including while on the House floor. The sources, including two people directly shown the material, said Gaetz displayed the images of women on his phone and talked about having sex with them. One of the videos showed a naked woman with a hula hoop, according to one source. “It was a point of pride,” one of the sources said of Gaetz.

It is also my understanding that most of Gaetz’s GOP colleagues were also quick to distance themselves from him, in part because they hate him. That said, Rep. Jim Jordan and Rep. Marjorie Taylor Greene have defended Gaetz, because of course they have. MTG has her own history of polyamorous relationships (with tantric sex gurus), not that there’s anything wrong with that.

Not that anyone here gives a damn about Liz Cheney, either, but it is worth noting that Gaetz spearheaded the effort to oust Liz Cheney from her position in the House.

Liz Cheney is standing on a deck somewhere in Wyoming - getting ready to flick a Marlboro butt into into the dirt - fucking amateur hour.

Meanwhile, if you’re curious about how this investigation even kicked off, it involves Matt Gaetz’s friend, Joel Greenberg (the indicted fella), a drone, a disinformation campaign, and using the state database in order to find girls 14-17 years old with whom he could form sugar daddy relationships. Meanwhile, when the investigation was ongoing against Greenberg, then AG William Barr frequently avoided Gaetz out of concern that Gaetz would pressure him to drop the case. This thread is wild:

Thread: The story of how @mattgaetz became a target of the Trump justice department is even crazier and weirder than you can imagine.

It involves blockchain, blatant fraud by a local tax collector, and a scheme to steal people’s government ID.

This is NOT AN APRIL FOOLS JOKE.

The deal with Nestor, meanwhile, is still a mystery.