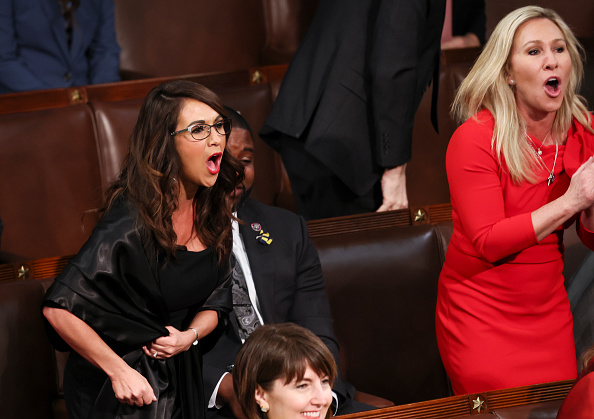 Why Is Marjorie Taylor Greene Mad at Lauren Boebert?

If you are wondering who is having the dumbest argument in politics this week, it’s two of the three dumbest people in politics, Marjorie Taylor Greene and Lauren Boebert (the other being Matt Gaetz). The argument concerns the still unresolved fight over who will be the next Speaker of the House, a position for which Kevin McCarthy has most of the votes, but not enough to give him the 218 necessary to become Speaker. There are five hard-right politicians who continue to insist they will not vote for McCarthy as Speaker no matter what — Reps. Andy Biggs (R-Ariz.), Matt Gaetz (R-Fla.), Ralph Norman (R-S.C.), Matt Rosendale (R-Mt.) and Bob Good (R-Va.). If they stick together, they can block McCarthy.

Boebert is also among those who will not vote for McCarthy, although she will if there is a mechanism to remove the Speaker. Like a few other right-wing Republicans, before she’ll vote on McCarthy, she insists that the House reinstall a rule allowing any member to call for a motion to vacate. McCarthy (and Pelosi) hate it, and refuse. Boebert, in turn, is withholding her vote, which some people are surprised by because Marjorie Taylor Greene has become a big supporter of McCarthy and many thought that Boebert and Greene voted in lockstep because, especially in the Republican party, they think that all ignorant hick ladies vote the same.

That’s at least what Charlie Kirk thought when he “accused” Boebert of having the same beliefs as Greene. Boebert, standing next to Matt Gaetz, took issue. “I’ve aligned with Marjorie and been accused of believing a lot of the things that she believes in,” she told Kirk. “I don’t believe in [McCarthy as speaker], just as I don’t believe in Russian space lasers, Jewish space lasers and all of this. No.”

The “space lasers” comment was a reference to Marjorie Taylor Greene’s belief that Jews used space lasers to shoot down Santa in the Jews’ never-ending War on Christmas. Greene — who is only supporting McCarthy because he promised her more power than she currently has, which is none — shot back at Boebert, who nearly lost her Colorado seat despite running in a district where Donald Trump won by 8 points.

She gladly takes our $$$ but when she’s been asked:

Lauren refuses to endorse President Trump, she refuses to support Kevin McCarthy, and she childishly threw me under the bus for a cheap sound bite.

The country is facing extremely difficult times. Americans expect conservative fighters like us to work together to Save America and that is the only mission I’m 100% devoted to, not high school drama and media sound bites.

Save America!
Defeat the Democrats!

It’s hilarious how, since McCarthy promised to grant Greene some power and influence in the party, she has become an establishment figure in the GOP, except for that time she called Joe Biden a “piece of shit” at the gym and complained that Target sold butt plugs.

I hope we don’t need to write about her enough to warrant it, but there are only so many MTG images I can stomach, so she may need a replacement in the coming weeks, too.


← It's OK To Make Dated References, Dagnabbit | The Best and Worst Books of Cannonball Read 14 →