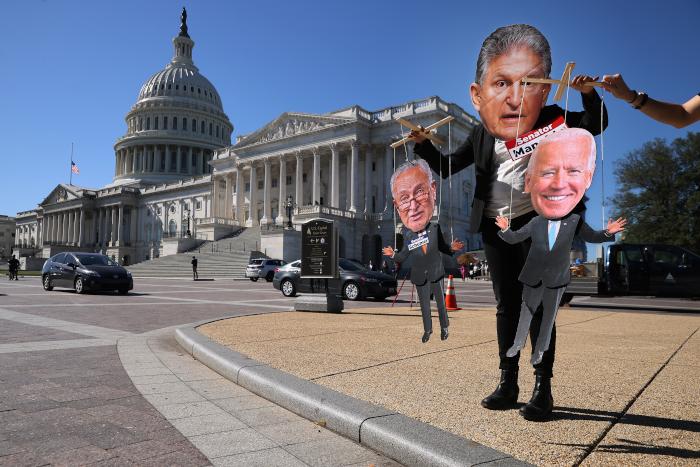 There is no bigger threat to a party’s interests than its own members. You can have a solid agenda, one that is coherent with your systems of beliefs, one that will effect a positive impact over your would-be voters. The political consensus might be on your side, popular support might be on your side, you have built the groundswell for the historically inevitable … but then, there’s just this one guy within your ranks, perhaps no more than five, who could grind the entirety of your plans to a halt. Or worse still, dilute them into one-sided compromises that barely resemble the original intent, the kind of compromise that, as the cliché goes, leaves both sides unhappy, but one barely trying to conceal their giddiness.

This leads us to today and Joe Biden’s ambitious infrastructure and social safety net agenda, one that receives a solid OK hand sign and nod from this cynical leftist. One that has overwhelming public support and one that is being blocked and chopped to bits by two fellow Democrats, making Joe Muncher and Krystal Sinmano prime examples of Malcolm Tucker’s famous law, which I don’t think I can copy here.

My fellow colleagues have already made their opinions on Joe Manchita and Krusty Cinema very clear. It’s one thing to oppose Climate Change legislation because the fossil fuel industry is financing your campaigns or because you outright have shares in coal companies. As in, Joe Munchausen is a coal baron. But trying to f—k with Medicare expansions? and Community Colleges? Weren’t we trying to teach people to code and learn a trade?

Here’s just a *partial* list of what Joe Manchin and Kyrsten Sinema have successfully STOPPED.

I am gutted that people in the US are being prevented from having access to the most basic of social safety nets because one ding-dong is too afraid of losing her competitive Senate seat and because the other one … I don’t know, Joe Machista is still a Democrat in name, which means he’s bound to lose his West Virginia seat anyway; he is 74 already and West Virginians themselves are furious at him effectively acting in favor of the GOP and costing them tens of thousands of jobs. Not to mention the whole filibuster f—kery. And of course, the distorted political spectrum of the US deems Joe Munchies and Krampus Enema as moderates, unlike the actual reactionaries they are, as Arwa Mahdawi correctly points out.

But this strategic bottleneck isn’t just a pox on the United States and everyone there who makes under… ten grand a month. Cue 2Pac, let me show ya how it affects the whole community.

I don’t wanna have to quote figures about per capita Greenhouse gas emissions. I’m sick and tired of explaining that for as much as China needs to drop coal, the US and developed countries need to go above and beyond in curtailing carbon-based energy. At least the former is taking some measures … and the wellbeing of their citizens doesn’t rank among their Top 5, maybe in their Top 6. What’s the US’ excuse?

This is what triggers my Biblical anger. A sequence of bullshit events that started with compromises in the 18th Century between slave-owners and people who found that a little distasteful. The hubris of a country that prefers to deal with the constant inconvenience of repeated history instead of examining itself, of looking down on the ups and downs of other countries while ignoring critical shortcomings … all this stuff, somehow leaving us with the most powerful and wealthiest country in World’s History saddled with a representative body where a Senator elected by… 290,000 people has more power than the other 49 combined. That’s the first layer of absurdity. And because this country is so rich and so goddamn powerful, it is his decisions on whether we are “rushing” this whole climate agenda thing that will determine the future of billions of people. In elections, we have neither voice nor vote.

That’s what makes Joe Merkin’s strategically placed pettiness so disastrous. He’s not just sinking the future of his state, or the United States, he’s also sinking Bangladesh. And the Maldives. And drying the Andes’ glaciers and bleaching the Great Coral Reef. This wealthy, 74-year old man is screwing with our future for a paltry half-million in yearly dividends. And excuse the underlying ageism of my anger, but allow me to be pissed at having Boomers and older stomping over my future and the future of millions of us. Of course, this agenda is being spearheaded by two men well into their seventies, but more and more it seems people like Bernie or even Biden are the outliers … in the English-speaking world. Perhaps because Boomers in Australia, the USA, and even in the UK didn’t have to deal with post-war scarcity, or dictatorships, or real generational traumas. People like Manchin and Sinema live in the blissful isolation of American abundance, they don’t need to care how their decisions impact the world outside their own gated communities and the carefully selected places they go for photo-ops. While the pavement in Phoenix starts cooking people like a city-wide pan and West Virginia becomes a sampling of Third World realities smack in the heart of America, not too far from the capital.

A very local mindset, to expand on Bong Joon-ho’s subtle but killer diss of the entire US film industry. These two senators operate limited on the two-inch barrier of the final rows in an Excel balance sheet, showing them the marginal losses they will incur if some taxes are raised, some donations are cut and some industries are stopped. This is what’s kneecapping your future, my future, their state’s future.

A two-inch barrier that makes them miss bigger pictures and long-term projections, the cynical opportunities the Green Economy could provide. And not the bullshit “blue hydrogen” parroted by the fossil-fuel industry (apparently, they actually get off on destroying the planet). Green hydrogen is coming, hydrogen made with renewable energies such as wind … and solar, and it will change everything. Those are the boats Sinema and Manchin will miss for their own states. After all, they’ve got their own.

One thing we have learned in the last 10 years of political history is that old politicians, either literally or in their mindset, will NEVER give new generations anything. Not. an inch. of space. You cannot ask them nicely, you cannot convince them, you cannot make an argument for yourself and your future. You need to take it away from them. Snatch it from underneath, because they might be experienced, but they are complacent. Be relentless in pushing them aside, because they have nothing to offer. They have no wisdom of age to impart because they don’t know what losing is (for real, do US Boomers know what losing is? And no, Vietnam doesn’t count, that’s something their predecessors screwed up). Less so if they were always carrying water for the hegemonies. That’s the difference between people like Bernie or Biden and Manchin or Pelosi. That’s the goal US Millennials and Zoomers should go for: relentlessly weed out the Boomers (and older) from Congress. Sooner than later, you might have a progressive Millennial with a clear path to the Presidency.

← Reddit Asks the Question: 'If Popular Brands Were Brutally Honest, What Would Be Their Slogans?' | Television Renewals and Pick-Ups: 'Succession,' 'Home Economics,' 'Foundation,' and More →