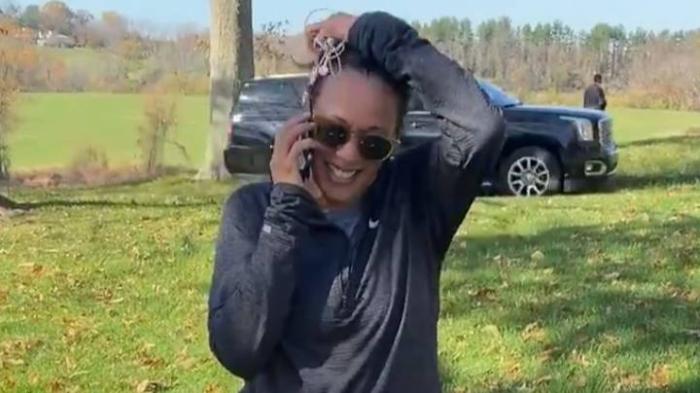 Just yesterday we were talking about how the press — and particularly Politico — has a sexist, racist weird obsession with Kamala Harris. Where it concerns Harris, things that would not have even made it into the back pages of the political section in the Trump administration are suddenly huge stories, like four staffers leaving the Vice President’s office at the end of the year (or an “exodus,” as the press calls it; a fake rivalry between Harris and Pete Buttigieg; idle, unfounded rumors about Harris being appointed to the Supreme Court to remove her from the 2024/28 equation.

The latest issue that Politico apparently has with Kamala Harris? She uses wired headphones.

Yes, the Vice President of the United States — who might understandably have security concerns when it comes to wireless technology — eschews AirPods for wired headphones. The audacity! And Politico doesn’t just know this: They have three sources on the Bluetooth phobia scandal!

NEW: Kamala Harris has long felt that Bluetooth headphones are a security risk.
So, she insists on using wired ones, 3 fmr campaign aides told @rubycramer and me.
That Bluetooth phobia remains (if you look closely, you'll see the clump of wires in hand)https://t.co/9poyMTQrU2 pic.twitter.com/HtscTWm1sF

Wow! Should someone call the DOJ and get an investigation started? Is this impeachment worthy? What does Pete Buttigieg think? Here’s an actual real-life excerpt from the piece:

That caution and vigilance has not stood in the way of Harris’ meteoric rise to the vice presidency — the first woman of color to do so. But still, should someone who travels with the nuclear football be spending time untangling her headphone wires? The American people deserve answers!

Confession: While I own a pair of AirPods, I strongly preferred wired headphones myself, and not for security reasons, but because AirPods are a pain in the ass. They’re easy to lose, they always have to be charged, they don’t always pair quickly, sometimes only one ear decides to work, and I’m always re-adjusting the AirPods to hear better. Wired headphones are just more convenient. Please do not report me to the authorities.

The Kamala Harris “Bluetooth scandal” is just further evidence that it was never “but her emails,” it was always “but they’re females.”

I'm sorry, let me attempt to summarize this: VP Kamala Harris is now being criticized for using wired headphones instead of Bluetooth because she's worried about security risks and this is bad because… we don't want a Vice President who goes the extra mile in national security?

Kamala Harris wasn’t even in my top 5 choices in the primary.

But, let’s be clear. Barraging her with media hit pieces for a $300 pot and avoiding Bluetooth is the same sexist media playbook they run on all women.

They did it to Hillary. And Warren. And AOC. It’s just sexism.