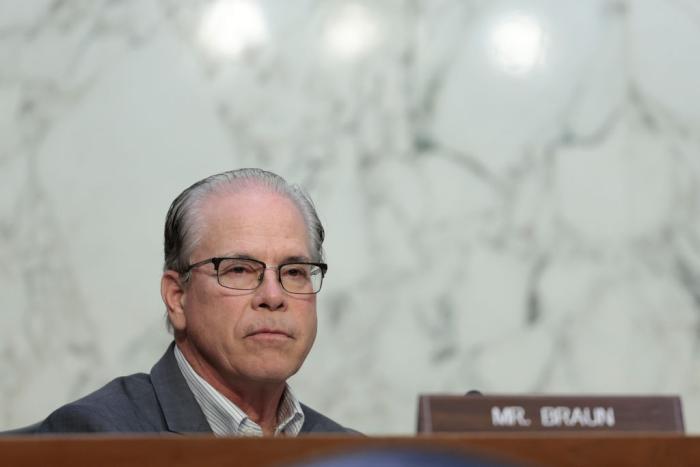 When a Politician Says He Thinks 'Loving v. Virginia' Should Be Abolished, Believe Him

Mike Braun, Republican Senator from Indiana, yesterday told journalists from his home state that he believes the U.S. Supreme Court was incorrect in establishing a federal right to interracial marriage in Loving v. Virginia, as well as access to contraceptives in Griswold v. Connecticut. He was very explicit about it.

Here is the video of a sitting Republican US senator calling for overturning the 1967 Supreme Court decision, Loving v. Virginia, which legalized interracial marriage. pic.twitter.com/gQ7vfrxLw2

Later, he claimed he misunderstood the question — asked multiple times in different ways — with the following statement:

“Let me be clear on that issue — there is no question the Constitution prohibits discrimination of any kind based on race, that is not something that is even up for debate, and I condemn racism in any form, at all levels and by any states, entities or individuals.”

The problem with his statement is that he clearly understood the question and the political view he was espousing. No other reasonable explanation exists for, “I think if you’re not wanting the Supreme Court to weigh in on issues like that, you’re not going to be able to have your cake and eat it, too. I think that’s hypocritical.” Indiana was also the first state to make interracial marriage a felony and didn’t repeal its anti-miscegenation law until 1965. It took the 1967 U.S. Supreme Court Loving v. Virginia ruling to force the final 16 states with similar laws on the books into accepting interracial marriage, so claiming it’s an established Constitutional right is an obvious dodge.

The only surprise in Senator Braun’s statement was it didn’t come from a more expected corner of the Republican party, such as MTG or Paul Gosar. While it is the obvious conclusion of the Right’s self-destructive obsession with states’ rights and citizens’ genitals, we’re not so far gone as a nation that even a significant minority of citizens believe interracial marriage should be outlawed. If Gallup polls are to be believed an astonishing 94% of Americans approve of interracial marriages. You can’t get that many Americans to agree ice cream is better than frozen yogurt. That number might be lower if citizens were asked if they approve of their own children entering into interracial marriages, but it’s still comforting to know we haven’t completely lost our minds.

That won’t stop the reactionary right from pushing to abolish the decision, however, any more than the fact that 65% of all sexually active women in the U.S. use contraception stopped the New Hampshire House last week from passing a bill allowing fundamentalist pharmacists to refuse to sell contraception to consenting adults. Arkansas, Georgia, Mississippi, and South Dakota already have similar laws, and in this current environment Griswold v. Connecticut can’t be considered any safer than Roe v. Wade.

Although the old saw about Republicans seeking to limit the government’s influence to the bedroom is now be expanded to include classrooms and bathrooms, the main point remains the same. Mike Braun showed the Republican party’s hand when he admitted the endgame was to allow states unfettered power to restrict sexual and romantic freedom to one man and one woman of similar melanin content. We shouldn’t let him back away from it.