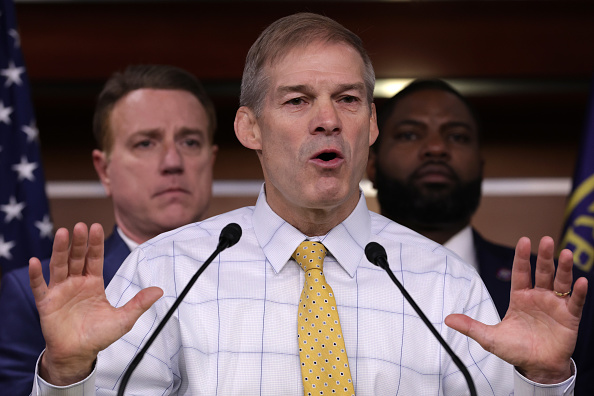 What It Took for the GOP To Finally Delete Its Infamous 'Kanye. Elon. Trump.' Tweet

In October, ahead of the midterms, the Republicans — at the time strutting around like cocksure roosters ahead of what they believed would be a red wave — tweeted out the following, basically celebrating the faces of the Republican party in 2022: 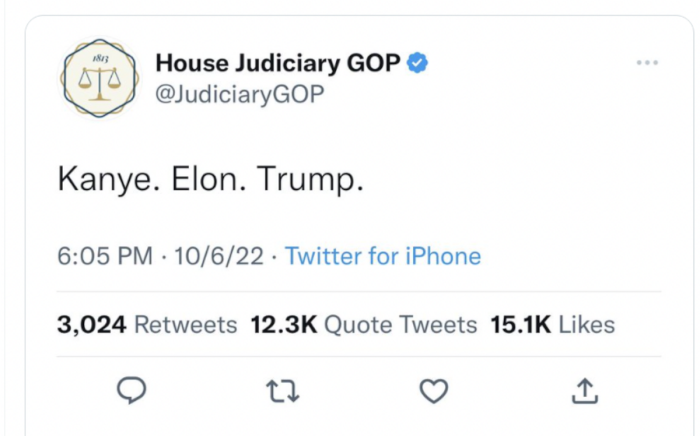 Those midterms did not go well. The Democrats maintained control of the Senate (and may add one seat), and the GOP advantage in the House will only be five or six seats. As for the faces of the GOP? Elon Musk has allowed Twitter to devolve into a Nazi cesspool and has lost over half of his advertisers on Twitter, and he’s somehow acquitted himself the best of the three. But even as Elon took his turn in the barrel, the GOP did not delete the tweet. And when most folks attributed the Republican losses in the midterms to Trump, did the GOP account take down the tweet? It did not. What about when Kanye went on a number of antisemitic rants, and threatened to go DEFCON 3 on Jews? Nope! The tweet stayed up. What about when Donald Trump had dinner with notorious antisemite and Holocaust denier Nick Fuentes? Still no. The tweet stayed up. “Kanye. Elon. Trump.”

Today, however, the House Judiciary Committee’s Twitter account has finally deleted the tweet after Kanye appeared on Alex Jones’ show and said some things so heinous that even Alex Jones was like, “Dude.” There’s no need to rehash it, except to hit the highlight: “I like Hitler,” Kanye said while holding a Bible and adding, “We’ve got to stop dissing the Nazis all the time.”

And that was enough. They finally took down the tweet.


In other words, the House Judiciary Committee was plenty happy to stand by Trump, Elon, and Kanye after the disastrous purchase of Twitter, the midterm meltdown, Kanye’s virulent antisemitism, and Trump’s dinner with a Holocaust denier. The line for the GOP it appears, is “I like Hitler, ” but everything short of that is totally fine.


← 'Transformers: Rise of the Beasts' Promises Action and Spectacle | 'People We Hate at the Wedding' Is Harmless Holiday Background Noise →