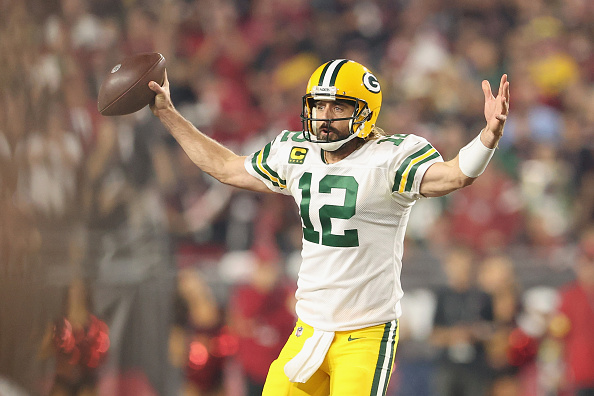 I’ve genuinely always liked Aaron Rodgers. I’ve heard him on podcasts, and he seemed, um, intellectually curious (although, he’s a bit out there when it comes to UFOs). He always seemed to be a level-headed guy, a UC Berkley grad with a good head on his shoulders. Hell, he was asked to guest host Jeopardy! because others, too, believed him to be a reasonably intelligent person.

the jeopardy search committee was a heat seeking clown missle

I take it all back. Not only did the man lie about being vaccinated — opting instead for a homeopathic treatment, ahem — he’s now taking cues from Joe Rogan. JOE ROGAN.

Rodgers hadn’t made a public statement since his COVID-19 diagnosis was announced, but he appeared on The Pat McAfee podcast today, and Ben Barnes over on The Athletic is live-tweeting it.

I’m … confounded. According to Barnes (and I’ve checked the video to verify), Rodgers said that he’s now “in the crosshairs of the woke mob.” He said he wouldn’t take the J&J vaccine because of clotting issues, and that he also heard about sterility issues with the vaccine. He says he doesn’t like to wear masks (even though he’s unvaccinated!) because he’s afraid of inhaling CO2 during workouts.

How much time does this man spend on Facebook?

He criticizes “cancel culture” a few times, and claims that “This idea that it’s the pandemic of the unvaccinated, it’s a just a total lie. If the vaccine is so great, then how come people are still getting Covid and spreading Covid?” GODDAMNIT.

Then he dropped this:

Aaron Rodgers on his recovery:

"I consulted a good friend of mine, Joe Rogan, and I've been doing a lot of the stuff he recommended in his podcast"

It’s all starting to make sense now. This is not about Shailene Woodley, as Twitter suggests. It’s about Joe Rogan. And yes, he did say he was taking Ivermectin.

"Why do people hate Ivermectin? Not just because Trump championed it, but because it's a cheap generic, and you can't make any money off of it"

My God, Rodgers. My God. Go ahead and take a seat next to Tom Brady and Phillip Rivers among those QBs I despite the most. I hope Jordan Love throws 5 TDs and steals his damn job.

"I realize I'm in the crosshairs of the woke mob right now so before my final nail gets put in my cancel culture casket, I'd like to set the record straight."

← Stream It or Nah: Hulu's Bleak but Riveting 'Dopesick' | Review: The Jokes Are Still There but Season Five of 'Big Mouth' Feels Like a Step Down →