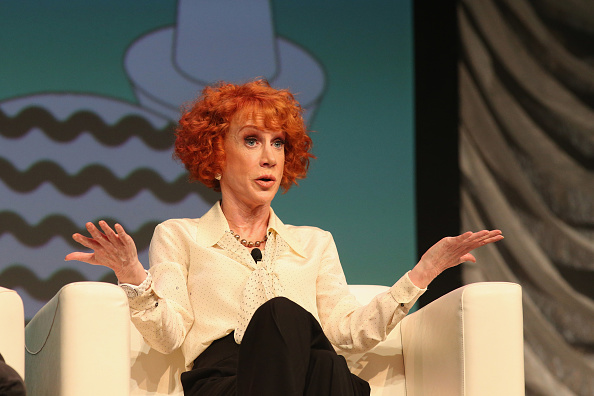 What Does 'Let's Go Brandon' Mean, and What Does It Have to Do with Kathy Griffin?

A few days ago, a pilot on a Southwest Airlines flight from Houston to Albuquerque signed off from his announcement to the passengers, “Let’s Go, Brandon!” to audible gasps from some on the plane. In fact, an AP reporter was nearly removed from the flight for insisting on getting a comment from the pilot.

What does “Let’s Go, Brandon” mean? A few weeks ago, a NASCAR driver, Brandon Brown, was being interviewed after winning a race while the NASCAR crowd was chanting from the stands, “F**k Joe Biden.” (Are you sure you’re a NASCAR fan, Kal Penn?) The reporter, who either willfully misheard the crowd or was simply trying to provide cover, suggested that the crowd was chanting, “Let’s Go, Brandon!”

Within a few days, Republicans began using the phrase, “Let’s go, Brandon!” as shorthand for “F**k Joe Biden!” As smarmy, jackass jokes go, this one is clever-ish, I guess, not unlike Trump voters owning “Deplorables” or Hillary Clinton voters co-opting “Nasty Woman.” I’m sure somewhere down South, there are drunken crowds at high-school football games who are chanting a little too enthusiastically, “Let’s Go, Brandon” to a back-up punter named Brandon Jones.

In either respect, it’s one thing for a bunch of Trump voters to razz their liberal nephew at the Thanksgiving table with “Let’s Go, Brandon!” but I am guessing that a plane full of passengers doesn’t want to hear the pilot exclaim, “F**k Joe Biden!” from 30,000 feet in the air seeing as how “F**k Joe Biden!” might sound like the final words of an aggrieved pilot crashing a plane into the White House. Believe it or not, as much as I might agree with the sentiment, I wouldn’t want to hear a pilot say, “F**k Donald Trump!” from the cockpit of a moving plane, either.

Some people reasonably got bent out of shape about an airline pilot referring to the POTUS from the cockpit at all, much less in a coded, profane way. When these people objected, conservatives — as they are wont — got all defensive and suggested that what Democrats have said about Donald Trump in the past is far worse. This is where Kathy Griffin comes in. This tweet, and others like it, is trending this morning.

Snoop Dogg made a music video about killing Donald Trump. Nothing happened.

As is typical of the right, they have characterized the left as loony overreactors, though I would argue that neither Kathy Griffin nor Snoop Dogg had the lives of 200 passengers in their hands when they exercised their right to free speech. You can choose not to watch Kathy Griffin on your television or not to go to a Snoop Dogg show, but you can’t choose your airline pilots. While that unidentified pilot is certainly free to hold that opinion and even express it in the pages of a right-wing tabloid, it might understandably get under the skin of those passengers on their way to Albuquerque to throw a pizza on the roof of the Walter White house.

Fuck @SouthwestAir ! I’d rather crawl… and I’m sure there’s a lot of great pilots looking for work. https://t.co/GmuU5gUXqt