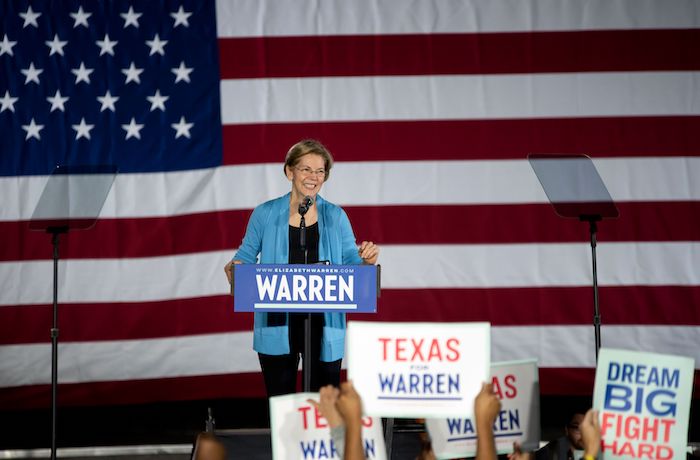 What Are the Character Alignments of the Remaining Dem Candidates on the Eve of Super Tuesday?

In addition to talking to my friend Jason about the most recent Bigfoot sightings and what kind of fae creature could be stealing the cinnamon from my home that also is responsible for the mushrooms that grow outside my door—we also talk about character alignments. A lot. This is good for you (or not, depending on whether you like this post) because today we went down the rabbit hole of discussing the remaining Dem candidates and their character alignments.

Now, look, this primary season has been ugly and it probably won’t get any better. At this point, you probably know who you are going to vote for. I do too. I bring this up because while I did attempt to be unbiased here, I have no love for Bernie Sanders and Michael Bloomberg and that probably colored their alignments. So if you want to go on Twitter and yell at me, have it, but understand I never claimed to not let my feelings guide me and that your vote and my vote count the same, so …

Anyway, here are the character alignments of the remaining Dem candidates. If you need a refresher on what the alignments are, you can go here.

I love Warren. She has my vote, and I hope tomorrow turns it around for her. Part of why I love me some Warren is that she listens, digests information, and then takes that info and develops a f*cking plan that benefits all, not just some. The reason why she is neutral and not lawful as I originally suspected is that she aims to not restrict anyone’s freedom and wants to level the playing field as much as possible.

Read this description and tell me that it doesn’t sound like Warren:

Neutral goods value both personal freedom and adherence to laws. They feel that too many laws may unnecessarily restrict the freedom of good beings. They also believe that too much freedom may not protect society as a whole and encourage counterproductive divisions and in-fighting. They promote governments which hold broad powers, but do not interfere in the day-to-day lives of their citizens.

I believe Joe Biden wants to make this country better for the majority of us but doesn’t want to cataclysmically shift anything to do so.

Read this description and see if it reminds you of Uncle Joe:

Characters of this alignment believe that an orderly, strong society with a well-organized government can work to make life better for the majority of the people. To ensure the quality of life, laws must be created and obeyed. When people respect the laws and try to help one another, society as a whole prospers.

There it is. Let me be very clear, here. I do not like Bernie Sanders as a politician, and as someone who is running for president. I do agree with his talking points and vague ideas for policies more often than not. However, it is f*cking BANANAS to me that a 78-year old man who had a goddamned heart attack less than 6-months ago is a viable candidate for president when everyone lost their f*cking minds in 2016 because Hillary Clinton got the flu, powered through it, and fainted as a result. What also drives me f*cking bonkers about his campaign is the sheer amount of gaslighting and silence-by-complicity he engages in by refusing to acknowledge that there is a component of his supporters that are very, very, very f*cking toxic. Let’s also acknowledge his dog whistle of “working class” people when he speaks about who his supporters are. It disgusts me:

Exits showed Sanders lost black voters to Biden by 44-points in SC. I assume many of them were working-class people? https://t.co/BpxzlutuG2

This is why I believe him to be chaotic neutral leaning towards evil—because I believe that he acts within his own best interests first and foremost, and the collective good of others is an afterthought. Additionally, he picks and chooses what “common” person he fights for, or deems worthy of his efforts. It’s very, very clear this man wants to be president. It is not clear, however, if he will actually be able to do the job if he’s elected. But still he wants it, so he’s gunning for it, despite the fact that he has been in Congress for almost 30 years, and yet he has done very little legislatively.

With that in mind, this description of chaotic neutral fits within how I perceive Bernie Sanders’ actions:

A chaotic neutral character follows his whims. He is an individualist first and last. He values his own liberty but doesn’t strive to protect others’ freedom. He avoids authority, resents restrictions, and challenges traditions.

A note—this dude has actively campaigned for candidates who are not for the right of women to have autonomy over their bodies, so “doesn’t strive to protect others’ freedom” hits home for me. How about you?

I mean, duh. He bought his way into the campaign after much better candidates were dropping out because they couldn’t fundraise enough money, and he’s the asshole who was a big fan of Stop and Frisk. F*ck that guy, man.

Here’s the description of lawful evil

A lawful evil villain methodically takes what he wants within the limits of his code of conduct without regard for whom it hurts.

I don’t believe for a second this dude wants to collectively make our lives better. I believe he wants to show Trump that he can win, and in the process, make his legacy better. I do believe, however, that he does have a code, regardless of how much I think that code is all kinds of f*cked up.

Anyway, that’s my take on the character alignment of the candidates. I didn’t do Tulsi because she’s not worth the brain cells or the attention.

Don’t forget to vote, tomorrow, if your state is holding elections!

← Where the Hell Is Michonne on 'The Walking Dead'? | Things Still Aren't Right Between Jessica Biel and Justin Timberlake →