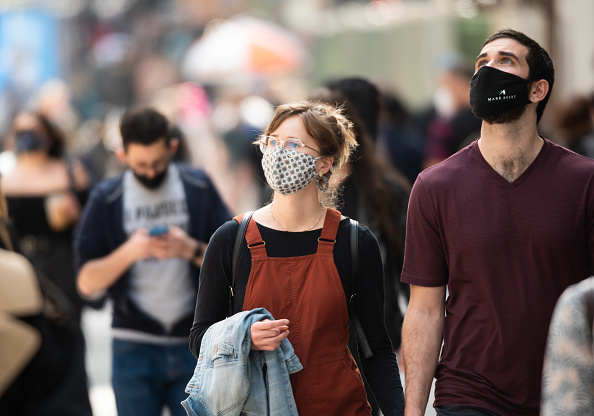 We Will Not Achieve Herd Immunity in the United States

According to the NYTimes, experts have acknowledged that the United States is unlikely to reach herd immunity, which is a huge bummer considering all that went into developing these life-saving vaccines. It’s a bit like announcing a goal of landing on the moon and advancing all the money and resources to do so, but then the astronauts refuse to go because they heard on Facebook there were rock spiders on the moon.

Let’s all just take a moment to appreciate this irony, too:

Granted, it’s not all vaccine hesitancy, although that’s a large part of it. The daily vaccination rate is slipping, and folks in Trump country are refusing to get their vaccines out of a mix of spite and ignorance, and the new variants are raising the herd immunity threshold anyway. It could be 70 percent or 80 percent or it could be higher, and to be honest, the variants aren’t going to go away until we achieve herd immunity across the globe, and with less than 2 percent of the population vaccinated in India’s 1.3 billion people, that’s not going to happen anytime soon.

I will reiterate this again, however: Vaccines work. Eighty percent of the adult population of Israel is fully vaccinated. They’re not wearing masks outdoors. Celine Dion is going to give a concert there next month. Most restrictions have been lifted. On Saturday, there were nearly 10,000 COVID-19 tests given. There were 13 infections. Thirteen! That’s the equivalent of 535 new infections in the entire United States, compared to the 45,000 new infections we actually had on Saturday.

Alas, here in America, 36% of adults under the age of 35 have said they won’t get vaccinated. Thanks, Joe Rogan.

In any respect, vaccine hesitancy plus new variants (some of which will occur because of vaccine hesitancy) means that we’re never gonna fully eradicate COVID-19 in the United States. It will, however, become much, much, much more manageable, with far fewer deaths and most of the infections eventually occurring mostly in younger people. The older folks and the most vulnerable will be vaccinated — and we’ll all get our annual boosters — while kids will probably get very mild cases, which will make them more immune to it when they’re older, which will turn COVID-19 into something akin to the common cold in a generation or two, according to the Times experts).

“What we want to do at the very least is get to a point where we have just really sporadic little flare-ups,” said Carl Bergstrom, an evolutionary biologist at the University of Washington in Seattle. “That would be a very sensible target in this country where we have an excellent vaccine and the ability to deliver it.”

Over the long term — a generation or two — the goal is to transition the new coronavirus to become more like its cousins that cause common colds. That would mean the first infection is early in childhood, and subsequent infections are mild because of partial protection, even if immunity wanes.

So, thanks to Fox News and Joe Rogan, we can look forward to milder Coronavirus infections … in a generation. In the meantime, those with chronic conditions, who may not be able to get the vaccine or for whom the vaccine may not be effective, will continue to remain vulnerable because Tucker Carlson claims that the vaccine may not work and also if your kid wears a mask it’s apparently OK to call the cops. America.


← Ben Affleck & Jennifer Lopez Are Probably Back Together Again | Watch the Trailer for 'Heels,' Which Is Like 'G.L.O.W.' But With Dudes →