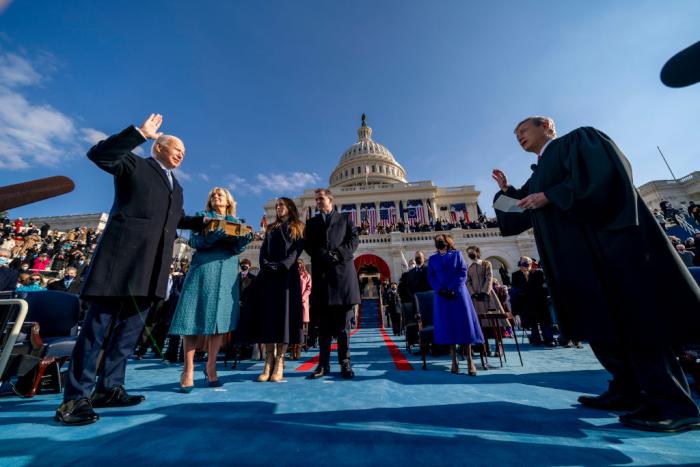 Politics Isn’t a Spectator Sport. We Need to Criticise Joe Biden When He Deserves It

So, Joe Biden is President of the United States. I’m sure all of us are ecstatic to see Trump go. With any luck, he’ll shrivel away into nothingness in misery and ego starvation. Millions of people are probably very happy to see Trump being replaced by Joe Biden. Millions of other people are not, and would prefer it was someone else. I’m in that latter group. I’m not here to sh*t on anyone’s joy. We all deserve to take a moment to take a relieved breath. Make no mistake: I’m relieved Trump is gone. But that’s not enough to make me applaud Biden getting in instead.

If you truly believe Joe Biden to be a progressive, then good for you. We have different standards, different definitions, or maybe we differ ideologically. Fair enough. Not much I can respond with to that. But if we do have the same definitions of progressive, and the same goals, even broadly—ending wars of imperial aggression, minimising racial and economic inequity, reigning in the worst excesses of capitalism (I’m in the ‘abolish it’ camp, but whatever, I’ll take what I can get)—then we need to talk about how we’re gonna navigate the next four years. Specifically, how we’re gonna navigate the political discourse around Joe Biden and his administration.

One thing that I think everyone should agree on is this: Politics isn’t a spectator sport. We need to stop treating it as such. We need to stop treating ‘our side’ with the fervent adoration that sports fans have for their team when it plays off against their arch-rival. Just because the other side is the mortal enemy, it doesn’t mean that we aren’t allowed to criticize our side. Politics isn’t a sport, and if we are to focus on what really matters—our vision of the kind of society we would like to live in—then we are going to have to criticize our side when it doesn’t act in a way that shows they’re serious about building that kind of society.

So, Biden is President. Sure, some of us would’ve preferred someone else.

Bernie keeping it real today with his classic coat and mittens 👌

The mittens are made by a school teacher in Vermont from repurposed woolen jumpers and recycled plastic bottles 💚 pic.twitter.com/ruDzmIZB2f

But whatever, we’re here now.

What we all have to do now is keep an eye on Biden. And by we I don’t just mean what’s often referred to as ‘the very vocal online Left’. I mean the millions upon millions of people who are desperately crying out for massive change. I mean the people who are genuinely happy that Biden won the Democratic nomination. Everyone. Biden’s promised some very necessary things. A $15 minimum wage. A £2tn investment in green energy. A suite of criminal justice policies aimed at ameliorating the worst of America’s racialised legal system. To take just a few examples.

Many would argue he doesn’t go far enough in those areas. A $15 minimum wage is not enough. Green investment is good, but Biden has shied away from the Green New Deal. And scaling back the worst excesses of racist American ‘justice’ is obviously the right thing to do, but there is a long, long way to go if that system is to be fixed, and Biden has flat out rejected more ambitious plans like the calls to defund the police.

It’s possible to hold two ideas in our heads at the same time. One: After Trump, Biden is a step in the right direction. Two: How many steps he’s actually going to take, that’s to be seen.

Similarly, Biden’s volley of executive orders, aimed at swiftly undoing some of Trump’s damage, is to be welcomed. Re-engage with the WHO? Rejoin the Paris agreement? Overturn the Muslim ban? Great, awesome, needs to be done. Cheers. But it’s the bare minimum we should expect. Getting back to the political landscape that spawned Trump in the first place is nothing to celebrate. Biden’s gonna reverse the Muslim travel ban? Excellent. Is he gonna bomb fewer Muslim countries than Trump? Or Obama? I’m sure nobody is expecting revolutionary change, but we desperately need to go to better places than we have already been.

The point is that all politicians are there to be distrusted. It’s like having a pet snake. As soon as a politician hatches from their egg, it’s our job to jump back in caution, point the finger, and never take our eyes off them. The little serpent might gain our trust as it grows, but we never take our eyes off it. Or leave it with our children. Even after many years of good behaviour, we would be fools to assume that the snake won’t decide one day to coil and tighten around our throat while we sleep. We might even trust it enough to let it rest in that position. But the instant we feel it tightening, that’s when we say, ‘OK. Enough of this snake now.’ (And then, inexplicably, we say: ‘Let’s get a different snake.’ When really we should be saying: ‘Time for a dog!’ The dog is socialism).

Politicians earn our trust, not with words, but with the accumulation of deeds. So when Biden talks the talk on racial justice, economic inequity, and climate change, that’s great. My own personal feelings on Biden are not hard to surmise for anyone who’s ever read any of my political pieces. I think he’s a Wall Street-friendly, warmongering, racist enemy of progress. I’m basing that on his record. That’s all you can go on when it comes to politicians. I’m happy to hear Biden using his words to signal that he is going to work to make progressive causes a reality, but I won’t trust it until I see it, and I will personally never be able to forgive the immense damage he’s already done. I know we’re starved of hope after four years of Trump, but that seems like the only healthy—and politically pragmatic—choice to make. If Biden sticks to his promises and does some good, that’ll be great. If he starts breaking those promises, it is our duty to hold his feet to the fire. Immediately and relentlessly.

Picture the latter scenario. To return to the sports analogy: When the Left criticises Biden because he falls short, we’re not booing the ‘team’ of the people who support him. We’re highlighting the gap between rhetoric and reality. Between symbolism and action. When we critique his cabinet appointments or his refusal to use a Democratic majority to push through proper change, we’re not taking joy out of ‘our side winning’ or having our mistrust validated. There’s no joy there. It’s anger and desperation. We’re doing what we’re supposed to do. Yes, of course, there will always be people arguing in bad faith. Put them aside. They’re a minority and they exist in every camp. We all need to let go of the ego that politics gets intertwined with and the partisan warfare that makes people stick by ‘their side’ no matter what their side does. We should have no investment in any politician other than their goals aligning with ours. That’s not to say that a figure can’t become a symbol that means something to a lot of people. When, for example, the working class of South America look to the memory of Simón Bolívar as a source of inspiration and a rallying point against imperialism, that’s one thing. When it comes to serving politicians, it’s a different matter. As we march forward into a Trump-less era, we have to be extra vigilant, and demanding of our politicians. These are going to be dangerous years. If we don’t make our politicians enact some deep, structural change, another Trump will rise, and they will be much, much worse.

And I’m not even gonna go into foreign policy. We KNOW that’s not gonna improve.

← New Zealand Twitter Has No Time for Amanda Palmer | Review: 'Our Friend' Is Terrified Of Its Own Source Material →