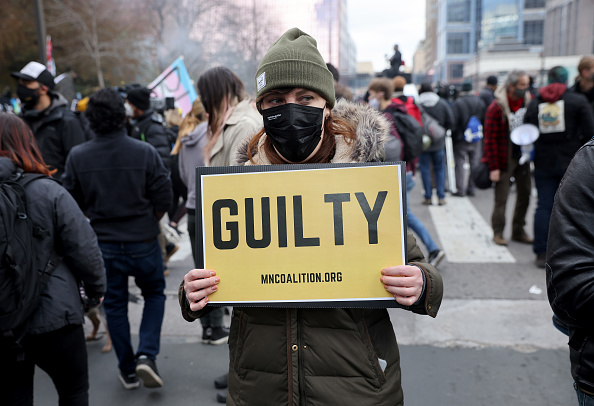 “It was a murder in full light of day, and it ripped the blinders off for the whole world to see,” President Biden said yesterday after Derek Chauvin was convicted on all three counts in the murder of George Floyd. “For so many, it feels like it took all of that for the judicial system to deliver just basic accountability.”

That’s the key, here. It took an officer being videotaped kneeling on a man’s neck for 10 minutes, 11 months of protests, and a complete change in the national conversation to finally elicit one cop’s murder conviction. That’s not going to be part of the equation every time a cop murders another Black person. We need to go beyond changing the conversation to changing the system, too.

Derek Chauvin: guilty on all 3 counts

Now let’s do the entire system of policing in this country.

I’ve written about this a couple of times, but this starts with reforming police unions and ending qualified immunity. Qualified immunity protects police officers from personal liability in all but the most extreme and most egregious police brutality cases (and in many cases, it affords them protection in even those cases). “Qualified” immunity has been expanded so much in police brutality cases that it is tantamount to absolute immunity, with basically one national exception: Derek Chauvin.

Yes, we should defund the police (i.e., reallocate many of those resources to more helpful, targeted, and compassionate services), but the law should stop protecting cops. When we study qualified immunity in law school, it’s about giving latitude to police officers operating under emergency circumstances. In practice, however, police officers exercise that latitude in vastly different ways depending on the race of those involved.

For anyone defending the cop that shot a teenage girl with a knife four times, please keep in mind that Kyle Rittenhouse - who actually shot & killed 2 people - was taken alive. pic.twitter.com/XjEWRreaPU

Our legal system has codified racism. There are statutes that protect murderers. Juries rarely convict in cases like these, and part of that has to do with the juries themselves, but much of it has to do with the law, which either hamstrings juries from convicting murdering cops or provides juries with an excuse not to convict, depending on how you look at it.

That’s where it starts. Qualified immunity must end, otherwise, Kim Potter — the officer who shot Daunte Wright — will go free, and so will every officer that isn’t caught on camera kneeling on a man’s neck for nearly ten minutes.

Kamala Harris: "Black Americans, & black men in particular, have been treated throughout the course of our country as less than human. Black men are fathers & brothers & sons… their lives must be valued… We're all a part of George Floyd's legacy & our job now is to honor it." pic.twitter.com/x38UxWAMmS

The best way to honor George Floyd is to change the system so that the murder of Black men by police officers is no longer protected by our laws.