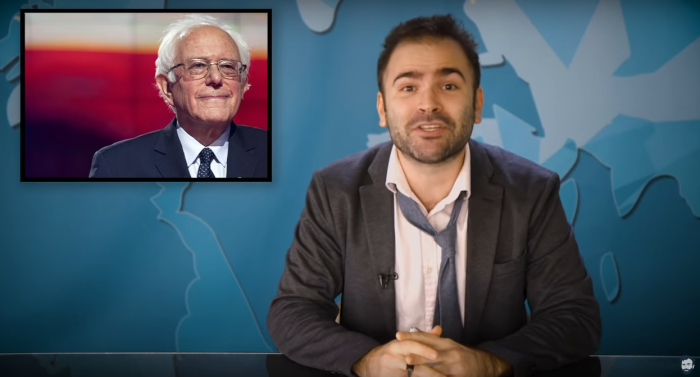 Hey have we ever talked about how the media as we mostly understand it—that is to say the main players on the printed, broadcast, and online stages—is presented to us as a somewhat neutral, virtuous entity, with the only interest at its heart being Reporting The News, Free Of Bias, Just The Facts; whereas the reality of the situation is that the vast majority of those outlets that comprise it are made up of mega-capitalist entities and people running on ad-driven business models and with an incredibly strong interest in maintaining the status quo from which they benefit so handsomely? Have we?

Or how about how when a politician and movement comes along that challenges that status quo they sh*t their pants? How the Presidential campaign of even a moderate social democrat who in most of the world wouldn’t be regarded as much more than a ‘soft Left’ type of politician manages to hold up a ‘They Live‘-glasses-style mirror to a society dragged so far to the right in part by that media that they will make every effort to ignore, deligitimise, and destroy that campaign? I feel like some of us have talked about that.

Anywho, Bernie Sanders was always the one with the most overwhelming chance of beating Donald Trump. That’s true now more than ever. You’d think that would be worth celebrating. A normal, healthy media—one not functioning as a glorified PR service for the oligarchical interests running the US empire might do that. Obviously, the fact that that’s not what happens in the US is not news. Nevertheless, the media’s impact on political reality is the story that needs to keep being talked about. Always. Especially at this juncture when a few politicians have come along that, for one, recognise the urgency of the coming capitalist climate apocalypse, and are in turn relentlessly attacked by that media, hampering their chance of enacting crucially necessary change. So here’s Cody Cody Johnston of ‘Some More News’ adding more material to the evidence pile:

Hey, that bit near the end? I’m framing that sh*t and putting it on my wall.

According to centrists and liberal pundits and the corporate media and billionaires, Bernie doesn’t exist.

And if he did exist, he’s unpopular.

And if he’s popular, he’s unelectable.

And if he is electable, it’s because his popularity is scary and Trumpian.

But he can’t beat Trump, because he’s unelectable.

But he doesn’t exist.

But even if he did exist, his ideas would be terrifyingly socialist.

But if you like those ideas, he’s actually lying about having those scary, dangerous ideas about equality, that you inexplicably like, and if there’s documented evidence that he has believed those things for over 57 years, he’s secretly friends with SKELETOR, and if he’s not friends with SKELETOR, he DOESN’T EXIST, and IOWA DOESN’T MATTER, and VOTES DON’T MATTER!