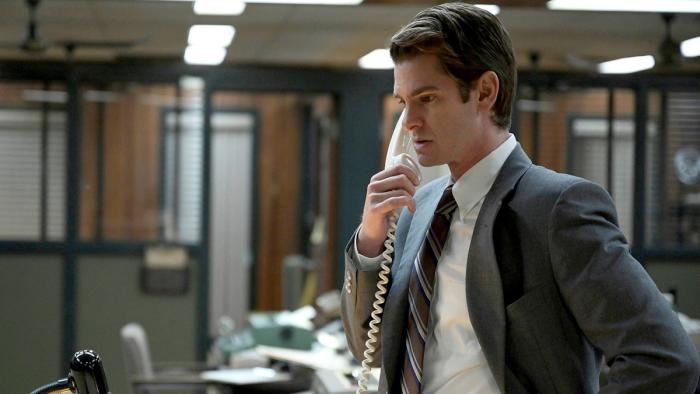 Under the Banner of White Men: The Constitution, the NRA, and the Biggest Lie We Were Ever Told

In Under the Banner of Heaven, which completed its brilliant season this week, Andrew Garfield plays Jeb Pyre, a detective investigating the murder of a woman and her infant by Mormon fundamentalists to whom she was related. During the course of the investigation, the faith of Prye — a devout member of the LDS church — is shaken after he is forced to confront the history of his religion. For Pyre, the breaking point comes when, during a conversation with the victim’s husband, he realizes in an almost epiphanic fashion that the tenets of his religion were created by men — specifically Joseph Smith and Brigham Young — not because of the callings they received from God, but out of a want to suit their own desires.

I’ve been thinking a lot about that rudimentary statement — that white men created Mormonism to suit their own wants — and how generations of men have clung to those beliefs to preserve their own desires. Obviously, this applies to more than just Mormonism. It applies to nearly every other religion and political and social institution, as well.

It’s the patriarchy, stupid. It is deeply ingrained in every fabric of our society, no more so than the very document upon which this country was founded. Think about the Constitution itself and how we are taught from a very young age to revere it. Fidelity to the Constitution is hammered into us in grade school, as is our high regard for the Founding Fathers. This, despite the fact that there are no Founding Mothers or Founding Cool Gay Aunts, and those Fathers do not include Black men, because back in the day, Black people were only considered 3/5ths of a person.

The Constitution, however, is clear about separating church and state, but we are also taught to have religious-like fealty to the document. We are told that it is a “living, breathing document” and that our Founding Fathers — white men who wrote it to suit their own needs — designed it to be flexible enough to accommodate future generations.

After I watched the Under the Banner of Heaven finale last night, I jumped over to Twitter and saw that “SHALL NOT BE INFRINGED” was trending (it continues to trend this morning), and I thought about those LDS elders fighting so hard to preserve the tenets of their religion, tenets designed to suit the desires of white men 150 years ago. I thought about law school, and how I spent three years learning how to interpret the Constitution, and how the only time the Supreme Court ever really made any social progress in this country — under the Brennan Court — was when the Justices fashioned a “penumbra of rights” out of the Constitution. Originalists — mostly white men who cling to the original meaning of the Constitution — will tell you that the Brennan Court made those rights up, and out of that made-up penumbra of rights came Roe and Casey, which would eventually lead to a Constitutionally protected right to gay marriage. Now, Originalists on the Court — in an effort to preserve the power of straight white men — are determined to remove those interpretations.

The Originalists aren’t entirely wrong, either. Liberals aren’t supposed to say this — because gasp! The Constitution — but the Brennan Court basically did make those rights up. They had to! There was no other choice. They were derived by implication because at the time of its original writing, most women and Black people were considered property so of course Thomas Jefferson and James Madison did not take the privacy rights of women into account.

The thing is, because we are taught from an early age the importance of the Constitution, and because it is such a sacred document, Supreme Court Justices, legal scholars, and lawyers — be they men, women, Black, brown, or white, straight to queer — have been taught to interpret the Consitution but never to challenge it. When shouty, mostly white male conservatives use ALL CAPS to yell, “SHALL NOT BE INFRINGED” on Twitter, that’s meant to be the end of the argument. Because that’s what the Second Amendment says, and while the Second Amendment may be open to interpretation, there is no right to challenge it. To challenge the Constitution would be to threaten the entrenched power of the patriarchy and Kyle Rittenhouse just can’t have that.

The document was designed by white men to make it nearly impossible to challenge. How bonkers is it that Ruth Bader Ginsberg and Ketanji Brown Jackson — whose legal existence were not even factored into the creation of this document — have to abide by the words of that document. They have to interpret the words, but the patriarchy is so deeply ingrained that no thought is ever given to challenging it. Hell, there hasn’t been an Amendment to the Constitution in 30 years, and even then, it had to do with giving raises to members of Congress. We saw what happened 50 years ago with the Equal Rights Amendment when women tried to challenge and change the Constitution rather than be forced to continue interpreting it. Men were like, “Back off. We gave you the right to vote. How dare you ask for equality!”

My family are reform Jews which, in short, means that we abide by the ethical principles of Judaism, but not the outdated rituals. It’s more inclusive and accepting, because back in the 19th century, Rabbi Abraham Geiger thought, “You know what? We should reformulate our religion to be compliant with modern times.” Granted, Geiger did it out of self-preservation, too: He wanted to abolish morning prayers because he didn’t want to spark anti-Semitism in Germany (Spoiler Alert: It didn’t work), but if we’re gonna get Ayn Rand up here, let’s be more inclusive about who we are preserving the power for. America needs a reform Constitution. Instead of trying to read the minds of men who have been dead for 250 years, maybe we should invite Black people, women, and queer folks to update that document. The biggest lie we’ve ever been told — the lie designed to preserve the power of white men from generation to generation to generation — is that the Constitution is a “living breathing document” because time and time again, we see that the only flexibility the Constitution ever offers is that which preserves the power of men.