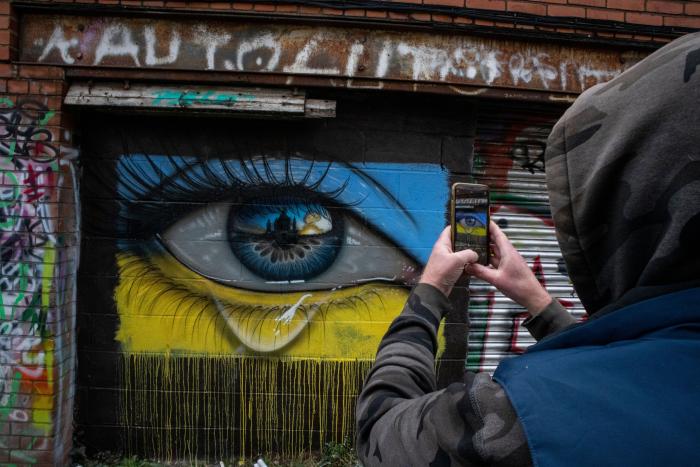 The people of Ukraine have had to make unthinkable choices every day since Russia first invaded nearly a week ago. In light of their frankly awe-inspiring courage, we need to acknowledge our part in this situation. Own up to the role we must all play in cementing their legacy, now and in the future. It’s the very least we owe them.

This doesn’t mean providing troops to support Ukraine. President Biden is making the right call by not engaging one of the world’s biggest nuclear powers in that arena. No matter what the polls say, or how much public opinion seems to dip as a result.

Which is frankly ridiculous, at this point. No, he wasn’t my first choice either. But without a doubt, Biden is the right leader for this moment and he’s doing an unimpeachable job in an incredibly difficult and dangerous situation. Imagine if our last president was still in power? We’d already be in World War III. Biden knows, and the West knows, that a commitment of foreign troops to the ground in Ukraine would foster internal division within our countries and provoke Putin to turn more and more to nuclear threats (like he has already begun to do).

Hell, apart from his pseudo-strongman delusions of grandeur, well-documented erasure of Ukraine’s sovereignty, and longing to return to the good ol’ days of the Soviet Union, the main driving factor behind Putin’s invasion is his desire to negate any Western sphere of influence. He is so threatened by the idea of a NATO-backed Ukraine on his flank that he went ahead with this badly-planned invasion and is now digging in.

Clearly, this fragile ego at the helm of one of the world’s foremost nuclear powers means that we have to proceed carefully. Any aggressive Western action would doubtless inspire Putin to reach even more merciless depths. In fact, we’re already seeing this play out. Now that their initial attacks have been stymied, Russian troops are resorting to more savage tactics. Unfortunately, it’s the civilians who are bearing the brunt of this cost. Because Putin appears to be deliberately targeting civilian areas within major metropolitan centers like Kharkiv and Kyiv.

Like all of us, I’ve watched the footage roll in of families huddled in subway systems and bomb shelters. Of unarmed people fearlessly putting themselves in the paths of tanks and soldiers. Like all of us, I’ve been brought to tears by President Volodymr Zelensky and his people. I can recognize this for the heartstrings-tuggin’ propaganda this is, and still be affected by it. What feels especially poignant here is Zelensky’s skillful deployment of social media to send images of his war-torn country to the free world. His use of Telegram and other social channels to relay his message just enhances the surreal nature of this conflict. One that feels both futuristic and regressive, all at once.

Especially because one of the most bone-chilling aspects of Russia’s unprovoked invasion of Ukraine is how much it seems to echo World War II. The opening salvos fired by Hitler as he used one pretext after another to justify invading his neighboring countries. I couldn’t stop the shudder from running up my spine when I saw Putin’s claims that the invasion was due to concerns about ‘ethnic cleansing of Russian citizens’ and how Zelensky was overseeing a Nazi hotbed of activity. (Ukrainian President Volodymyr Zelensky is Jewish.)

For Putin to take a page out of Hitler’s playbook while invading another country and accusing their Jewish leader of empowering Nazis is beyond the pale. It’s also a very calculated move. A time-honored tactic designed to play into humanity’s tendency to reduce things to black-and-white.

The world, for once, can’t let ourselves do that. To look at Ukraine’s situation in black-and-white is to do it a grave disservice. Yes, this conflict is linear in that there’s a clear aggressor (Russia) and a clear victim (Ukraine). Actually, that’s not fair — Russia isn’t the aggressor, Putin is. There’s a clear villain in Putin and his greedy, silent oligarchs. Clear heroes in Zelensky, his people, his First Lady, the Sunflower bubby, the Snake Island troops, and so many more.

However, in another sense, so much about this situation isn’t so clear cut. We can — and should — recognize the gilded trap of American Exceptionalism for the farce that it is while also feeling grateful for Biden’s ability to drive a coordinated Western response. We can, and should, applaud the EU for taking swift, unprecedented action to sanction Russia and attempt to make Putin actually feel the ramifications of his choices. We can, and should, support the efforts of global sports leagues and political leaders to hurt Putin in the only places a powerful white man can be hurt — his ego, and his wallet.

Humanity contains multitudes. We are quite capable of seeing the gray areas in life when we so choose. We should choose to acknowledge Ukraine’s troubling history with racism and corruption and also own up to the fact that it’s not just Ukraine with these issues (cough — hello, America — cough). We can acknowledge that there may be some long-term, lasting good that comes from this conflict while wishing it never happened in the first place. We can respect and honor Ukraine’s sacrifice while regretting the loss of even one life in this crisis.

We can recognize that recent media coverage of predominantly white Ukraine is a lot more extensive and sympathetic than coverage of conflicts in predominantly brown and Black nations. Understand the implicit biases that permeate our world. Acknowledge how far we still have to go, and how very much we need to do in order to get there. Yet we can also recognize that this isn’t an apples-to-oranges comparison. There is a difference between acknowledging the unpleasant truths underlying a situation and reverting to bleating “whataboutism” whenever someone mentions Ukraine. Because yes, we do need to address these issues, and soon. But if we don’t have a world to live in because a megalomaniacal Russian despot with nukes decides to blow it up, then, well, that kinda renders the rest of it moot.

We have to see the situation for all that it is, instead of reverting to our default state of being hyper-reductive whenever we get scared. We can join African members of the UN Security Council in condemning instances of racism encountered by African students fleeing Ukraine without unilaterally deciding that this means the entire country is made up of Nazis.

Tom McTague does a great job of capturing this entire muddled, terrifying, guilt-laden dynamic in his recent piece in The Atlantic. “There can be something a little distasteful about Western onlookers (myself included) cheering on Ukrainians for a cause that our countries are not willing to join, a stance that risks raising the price of a peace that will be paid only with Ukrainian blood. Nevertheless, it is possible to recognize this, to be inspired by what Zelensky represents, and then to be shamed by his example.”

I’d like to bookend this confusing, distressing state of affairs with my own message of hope. Yes, things seem very bleak right now. In addition to this horrific situation unfolding in Ukraine, we have multiple wars, a global pandemic, civil unrest, and a dire climate change warning from the U.N. Here at home, what the GOP is doing to voter rights, trans rights, and abortion rights in TX, FL and countless other states is numbing to watch.

Barely a year ago, the former president and his allies attempted a violent coup to overthrow our democracy. Not only are his congressional allies still in power, but also their representatives are now openly attending white nationalist rallies without any consequences. Reminder — this is the party favored to win our midterm elections.

OK, um, I’m learning that messages of hope are harder than I thought. Look, the reality is — everything about our world right now is scary. It should be. To say otherwise would just be sugar coating things, and we all know how well that’s served us all in the past. But I also know how crazy resilient and trailblazing the human spirit is. That heroes aren’t just part of Hollywood IPs anymore, although I’m pretty sure Ukraine has some speechwriters on tap somewhere, because no way are they all saying things this badass just off the cuff.

Somehow, Putin has unified the rest of the world in a way previously thought impossible. So I’m going to manifest that this newfound unity will continue to last even when the current crisis in Ukraine ends (hopefully soon). I’m also going to manifest that this joyous occasion will be marked by Putin slinking back to a regime change in Moscow as his superyacht gets confiscated forever and Ukraine is officially welcomed into NATO with open arms.

In my heart, this very unity inspired by the example of Ukraine will be the springboard from which we’ll be able to solve our most pressing global problems. Take climate change, for example. To date, no matter how dire the warnings seem to get, we haven’t been able to enact meaningful change on a larger scale. Now? If we can leverage our newfound unity, for the first time, we have a real chance of saving our planet. We actually have a chance to build a world that’s worthy of the best of us. That’s worthy of the people of Ukraine. We owe it to them to water their seed of hope and turn it into something beautiful.

← Sony to Shutter Funimation, Moves Titles to Crunchyroll | Twitter Users Ponder the Funniest, Dumbest Things They Did In 2021 →