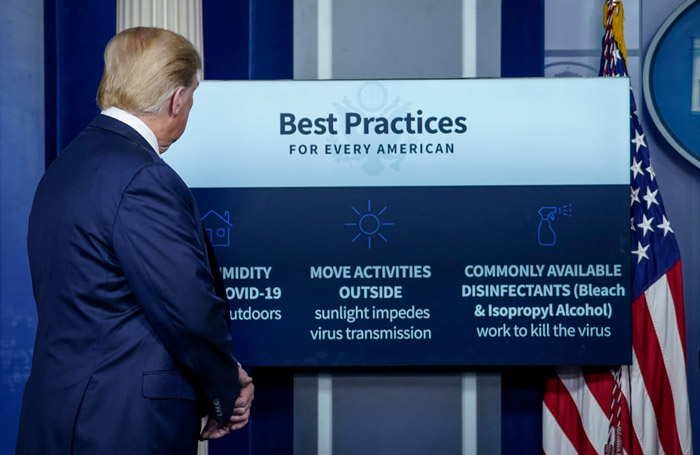 Yesterday, President Donald Trump used his big-league brain to spitball some new solutions to beating COVID-19. Predictably, they were the nonsense ramblings of a lunatic. Told that disinfectants kill the virus on surfaces, the national disgrace suggested injecting disinfectant into the human body.

“I see the disinfectant where it knocks it out in a minute, one minute,” Trump said in a press conference, “And is there a way we can do something like that, by injection inside, or almost a cleaning?”

Trump went on to admit they’d have to use “medical doctors” to pursue this idea. “I’m not a doctor,” he said, then pointed to his head, adding, “But I’m—like—a person that has a good you-know-what.”

The word is “brain,” Mr. President.

To be totally clear: injecting disinfectants would poison and potentially kill people. It’s literally how some murderers have killed people. The president is a dangerous moron offering suicide solutions during a pandemic. Just so we’re clear!

Two million years of hominid evolution, and it comes to this. https://t.co/rWJUh4Mvs5

After Donald Trump suggests ‘injecting disinfectant’ to treat coronavirus, millions of furloughed workers wonder why they’re currently out of a job while the world’s biggest imbecile isn’t.

How long before the first hardcore #Trump supporter dies from injecting disinfectant? pic.twitter.com/3olqQnszf9

Donald Trump supporters are struggling right now. They are having to simultaneously think Coronavirus is just the flu while also thinking it is a Chinese bio weapon designed to turn them communist all while standing in their kitchens injecting disinfectant into themselves. Hard.

After trump's "disinfectant as vaccine" comment, Dr. Birx is seconds away from either saying "Bless your heart" or blowing her head off. You be the judge. #Clorox pic.twitter.com/kXmojfb8e5

Waking up to all the tweets about Trump and #disinfectant. Stop letting the man speak. He is a danger to human life. pic.twitter.com/1LhtDBCtP2

Did you ever imagined that we will have to cope with a president suggesting injection of #disinfectant into our bodies? This is beyond any sci-fi/comedy ever written. #Trump pic.twitter.com/p2QmDmAOu6

what a time to be alive https://t.co/kAFhUqnyPB

I mean, the idea of injecting disinfectant into the body - suggested by the President of the United States - isn't this the moment that everyone agrees Trump is mentally unfit for the job? #25thAmendmentBeforeWeAllDie

Calm down, Trump just suggested injecting people with bleach, it’s not like he said anything really dangerous like when Michelle Obama suggested that kids should eat vegetables.

Obama wanted you to have health insurance…Trump wants you to drink bleach.

The difference between both parties summed up. #Clorox

“The only thing we have to fear is fear itself.” - FDR

← She's Not Fooled By The Rocks That She Got, She's Just, She's Just Jenny From The Block | The Latest Scientific Findings: Antibody Tests, Vaccines, Plus a Smoking Study out of France →