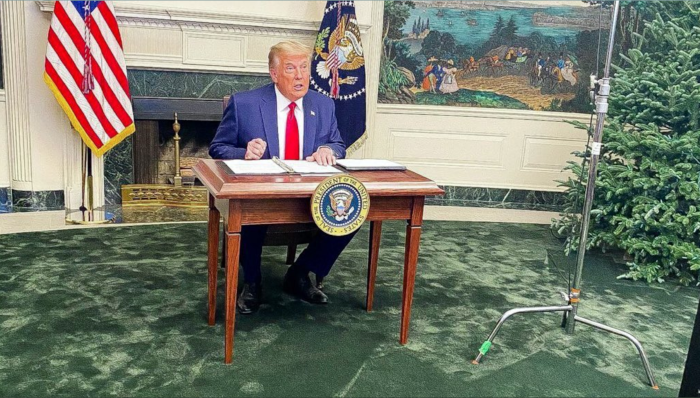 For the first time since the election 23 days prior, Donald Trump finally took questions from reporters last night. It went very well.

"Don't talk to me that way, you're just a lightweight, I'm the president"
😂😂😂#TrumpTantrum pic.twitter.com/XSl7P1IbjF

Besides yelling at a reporter, Trump also said that it would be “very hard” for him to concede, but if the Electoral College goes for Biden, he’d leave the White House. He also said that “shocking” evidence of voter fraud would surface before Inauguration Day, and repeated a lot of the usual rambling, nonsensical lies.

But what most people paid attention to was the tiny desk and attitude of the President during the press conference, which led #DiaperDon to trend, which triggered the snowflake in the White House.

Twitter is sending out totally false “Trends” that have absolutely nothing to do with what is really trending in the world. They make it up, and only negative “stuff”. Same thing will happen to Twitter as is happening to @FoxNews daytime. Also, big Conservative discrimination!

How it started… How it's going pic.twitter.com/WrSKqHa6it

They sat him at the kiddie table on Thanksgiving with a notebook but no pen. A “busy box” for a toddler. pic.twitter.com/KcZNZKNf6V

I swear, they are downsizing his desks to phase in the realization that Biden gets the big resolute desk in two months. https://t.co/4HqkrG7b5E

Whoever told him this was a good idea hates him. pic.twitter.com/TLizcRttNn

THANKS FOR LENDING ME YOUR DESK pic.twitter.com/19GMO22q07

The hashtag may have also been … literal.