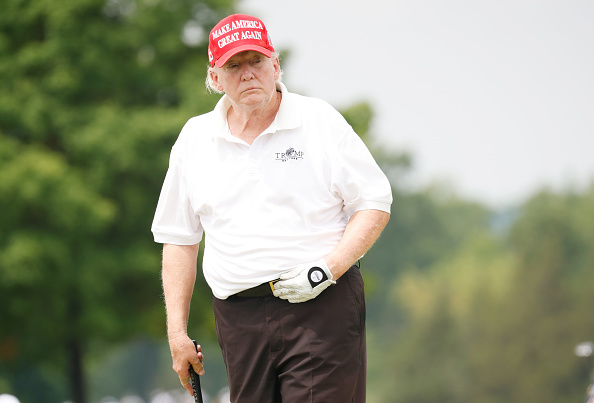 After Ivana Trump died last month, she was buried where all people must want to be buried: At the site of her ex-husband’s golf course, Trump National Golf Club in Bedminster, New Jersey. It seems like a weird place to be buried, but maybe that’s what she wanted? Maybe she wanted to be defined in the afterlife by her relationship to her ex-husband? Who knows, but since Trump buried Ivana on his own golf course, at least he probably went all out, right? Like a gold mausoleum surrounded by some gaudy, ornate statues or somethi..What’s that? It looks like she was literally put out to pasture.

Wow. It looks like Ivana’s gravesite should be surrounded by police tape.

Why would Donald Trump and his and Ivana’s kids dump Ivana out on a golf course and take so little care? If you said “to avoid paying taxes” give yourself a gold star!

As a tax researcher, I was skeptical of rumors Trump buried his ex-wife in that sad little plot of dirt on his Bedminster, NJ golf course just for tax breaks.

So I checked the NJ tax code & folks…it's a trifecta of tax avoidance. Property, income & sales tax, all eliminated. pic.twitter.com/VDZBlDyuhQ

Yes. I was surprised. That's why I checked and why I posted the thread.

I couldn't believe her 3 kids—whom she apparently loved & who loved her—would allow their father to treat their mother like this. Burying Ivana in little more than a pauper's grave disgraces them all.

Meanwhile, the golf course where Ivana is buried was also the site last week for a controversial Saudi Golf Tournament that was sparsely attended. In fact, tickets were being resold to the tournament on StubHub for a mere $1, which is not that much less than Trump paid for his ex-wife’s gravesite.