9:15: A senior advisor to Mike Pompeo has resigned, apparently citing plummeting morale in the State Department owing to Pompeo’s refusal to support his diplomates ensnared in the Ukranian controversy (the advisor was not involved).

All of this reminds me that, a month ago Trump tried to invite the Taliban to Camp David two days before 9/11 for peace negotiations. That was only a month ago.

7:37: Fiona Hill here is the former Special Assistant to the President and Senior Director for European and Russian Affairs on Trump’s National Security Council.

EXCLUSIVE: Fiona Hill to testify to Congress that Giuliani, Sondland circumvented the NSC and normal White House process to run a shadow #Ukraine policy, a person familiar with her testimony tells @NBCNews

At least four national security officials were so alarmed by the Trump administration’s attempts to pressure Ukraine for political purposes that they raised concerns with a White House lawyer both before and immediately after President Trump’s July 25 call with that country’s president, according to U.S. officials and other people familiar with the matter.

“Those involved in sounding alarms “were not a swamp, not a deep state,” said a former senior official. Rather, they were White House officials “who got concerned about this because this is not the way they want to see the government run.”

Oh boy will the WH regret this: On October 3, 2019, counsel for Parnas and Fruman sent a letter to Congress requesting additional time…and confirming that “Messrs. Parnas and Fruman assisted Mr. Giuliani in connection with his representation of President Trump.”

"As for Trump, Parnas said he has met with the president multiple times, in Washington and at Mar-a-Lago, but refused to say what they discussed."

LOOK AT THIS PHOTOGRAPH pic.twitter.com/vy92z1MyXb

This is a hell of a story, too.

Scoop: Rudy Giuliani was also planning to head to Vienna tonight—one day after Lev Parnas and Igor Fruman were trying to do the same with one-way tickets. https://t.co/e4lJr6V3Z5

Y’all: I’m starting to feel like that July 25th phone call is the string that someone pulled and now the whole sweater is unraveling. It all leads back to Ukraine and pro-Russia money.

4:45: Trump, expectedly, denies knowing these people, as speculation heats up that Giuliani will be the next indicted (Pompeo is also distancing himself from Trump).

President Trump said he hopes Rudy Giuliani doesn’t get indicted but repeated he doesn’t know the two men or their connection to his personal attorney.

BREAKING: The FBI and federal prosecutors in NYC are scrutinizing Rudy Giuliani’s financial dealings with the two men charged today. The men, Lev Parnas and Igor Fruman, are charged with pumping Russian money into US political campaigns. (reporting from @evanperez @ShimonPro)

"Maybe they were clients of Rudy," he adds. "You'd have to ask Rudy." pic.twitter.com/EzCIEA6QMz

The House has also subpoenaed Rick Perry, and I said earlier that I wouldn’t doubt if Perry were tied up with the Parnan and Fruman, and I bet that’s exactly the case.

I’m not gonna get into it too deeply, but there are conspiracies now circulating that Trump/Pompeo are planning to make Giuliani their scapegoat. William Barr met with the SDNY yesterday, which is fueling that speculation. That would be hilarious (but only if Giuliani then turns on Trump and brings him down).

3:44: This thread on Parnas and Fruman is insightful. Basically, they have a history of seedy activities, Rudy worked with them anyway, and they funneled hundreds of thousands of dollars of Russian money into a Pro-Trump PAC managed by Donald Trump Jr. And yes, there are pictures of them with Donald Trump.

This could end up bigger than the phone call. This is Russian money laundered through Don Jr’s PAC to influence American elections.

Here’s what we at @ProPublica and @WNYC know about Lev Parnas and Igor Fruman…https://t.co/lsrGedf76G pic.twitter.com/1xF7NPKOdu

2:40: This is insane. This is what Republicans have been reduced to. Does Cory Gardner think this somehow plays well for him? Or even for Trump?

Breaking: @SenCoryGardner refuses to answer question whether it is appropriate for the President to ask a foreign leader to investigate a rival. Quite the exchange in Denver #copolitics #kdvr pic.twitter.com/5Y0EYOcKjM

Mitt Romney acquits himself better. He doesn’t rule out removing Trump from office, just says that he’d have to “look at the evidence.”

Sen. Mitt Romney says he's not going to weigh in now on a potential Trump impeachment trial: "I would have to look at the evidence as it's presented" https://t.co/H9n7JKbYS7 pic.twitter.com/AQehslYLBT

Here’s a little more detail on Parnas and Fruman, who — by the way — were spotted having lunch with Giuliania YESTERDAY.

Elsewhere, OF COURSE HE DID.

And now we learn that the head of Facebook’s global elections policy used to work for Giuliani. This is just so 2019.

Harbath is Facebook’s head of global elections policy. She literally worked for Rudy Giuliani. I can't make this up. pic.twitter.com/wQ1mf9CCY8

12:31: Parnas and Fruman have now been subpoenaed. I think we’re gonna be hearing a lot about them in the weeks to come.

The Chairmen write: " They are required by law to comply … They are not exempted from this requirement merely because they happen to work with Mr. Giuliani, and they may not defy congressional subpoenas merely because President Trump has chosen the path of … obstruction." https://t.co/Lr1qOxm0V1

when I asked Rudy about prospect of the FBI flipping Parnas and Fruman to get to him, he replied “Good luck.”

"Without being provided explanation or justification about why the administration was delaying the aid, some career officials at the Office of Management and Budget became worried they didn't have the legal authority to hold up the funds, according to the people familiar." https://t.co/nrOxkodnKL

10:20: The indictment against the Rudy henchmen, Lev Parnas and Igor Fruman, is out, and it seems to confirm much of what I wrote below. They were arrested for campaign finance violations, specifically funneling money to political candidates to buy influence — they are foreign-born, and therefore prohibited from contributing to American political campaigns (they hid their efforts in an LLC, among other things). And this, from the indictment, supports what I was saying below: 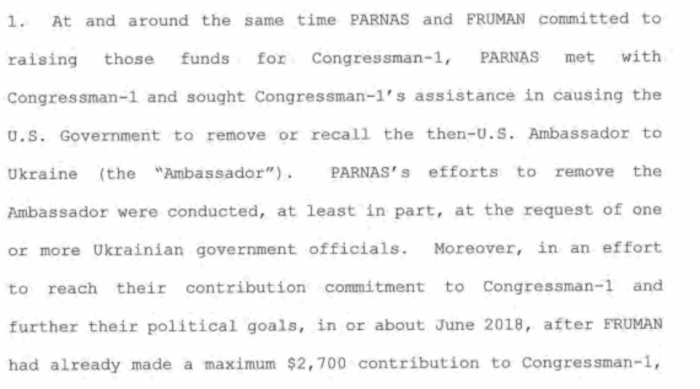 I believe that Congressman-1 is Pete Sessions, and that they illegally funneled money to him so that he would help them grease the wheels to get rid of the Ambassador to Ukraine on Rudy Giuliani’s behalf, who was doing it on behalf of Trump associates (dollars to donuts says that Rick Perry is involved in this, too, since Giuliani was trying to steer gas contracts to Trump associates).

I was considering dropping these Trumpdates today because I’ve been spending more time on social media than is probably healthy, but I read somewhere yesterday that the more that impeachment is in the news, the more support for it will grow. So, I’ll quit over Trump’s impeached body.

Trump and the White House are pushing back a lot, mostly by not cooperating, stonewalling, or dodging, but I do think that — for the most part — the actual facts are getting through to the majority of people. I think by this point, everyone that spends any time keeping with up with news understands that Trump, Giuliani, Pompeo, and Barr embarked on a months-long campaign to pressure the Ukrainian government to investigate Joe Biden and his son.

I spend a lot of time — as does most of the media, I assume — trying to find cracks in the Republican party here, and there have been a few articles in the last 24 hours. AP is reporting that the White House staff — folks like Kellyanne Conway — have completely disappeared amid impeachment talk. There have been no pressing briefings. Conway hasn’t spoken to the press since September 27th (and that was a disaster) and even Jared and Ivanka are largely MIA, at the moment.

Kellyanne’s husband, George, meanwhile joined 15 other high-profile conservative lawyers today to argued to other Republican lawmakers that the House should begin an “expeditious” impeachment investigation. A few of those attorneys — including people who worked for previous Republican administrations — believe he should be removed from office.

Apparently, the President is also calling Mitch McConnell as much as three times a day to warn him that if any Republicans step out of line, he will make their lives a living hell. Elsewhere, an op-ed in The Washington Posts suggests that Democrats should focus less on vulnerable 2020 GOP Senators — like Susan Collins — and more on senior statesmen who are retiring or unlikely to run for re-election, people like Richard Burr and Lamar Alexander. It’s those Senators who have also been very quiet in recent weeks.

Meanwhile, this is a story bubbling beneath the surface right now that could potentially blow up. Follow along here. This is from earlier in the week:

This is from this morning.

NEWS: Lev Parnas and Igor Fruman, who helped Giuliani pursue an investigation into the Bidens in Ukraine, were arrested late Wednesday on criminal charges of violating campaign finance rules. https://t.co/x61omKGG7B

This video is from back in March.

So, it turns out that a Trump SuperPac paid then-Texas Congressional Rep. Pete Sessions $3 million in advertising to send that letter in an effort to get rid of the former ambassador to Ukraine, Marie Yovanovitch, who was unexpectedly recalled by the White House two months after that video aired (was Ingraham involved?). So, I think we’re looking at another separate but related scandal that has already ensnared Rudy’s henchman and potentially Rudy and Pete Sessions. The outlines of it look like this: Rudy was trying to steer lucrative gas contracts to in the Ukraine to Trump allies; the ambassador to Ukraine, Marie Yovanovitch, was standing in his way; so Rudy used a Trump SuperPac to funnel $3 million to Pete Sessions in exchange for a letter that would pave the way for Yovanovitch’s dismissal.


← Thirsty Thursday Is Here With An Assist From Reddit | The Force Is Strong With ... Freddie Prinze Jr.? →