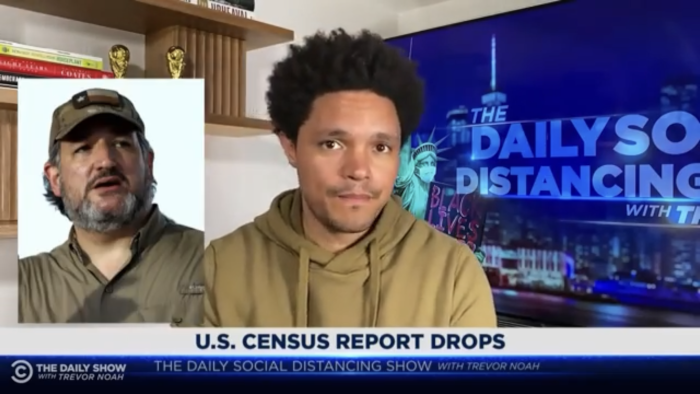 Ted Cruz, aka Nobody’s Favorite Uncle, attempted to spar with Trevor Noah today. Among Cruz’s bad life choices (of which there are many) this ranks highly. Cruz is one of these terrible types of people who thinks he’s funny despite being as humorless as a slice of soggy, bloated, white bread. It clearly does wonders for his confidence and wreaks havoc on his decision-making.

It all started with Noah discussing the recent US Census results on The Daily Show:

Trevor takes a quick shot at Cruz’s appearance in the video, showing a brief photo of the Senator in what I can only describe as Dad Band Army Chic. Despite Cruz, ya know, choosing to look like he does, this clearly got under his skin and he decided to respond on Twitter. Where everyone can see it …

Trevor Noah whines that people are fleeing high-tax blue states & moving in droves to low-tax states like Texas, where the jobs are.

Also predicts the Biden years will be the Great Depression. https://t.co/aNewrWtme1

Cruz pretty willfully misrepresents Noah’s segment in his tweet. That should come as no surprise as is not the first nor the last time Cruz will misrepresent something. Also, the irony of Ted Cruz accusing someone of whining is not lost on me.

Noah responded with a quality burn and a new nickname for Ted that I insist we all use from this point forward.

Not sure I'd be using the words "fleeing" and "Texas" in the same sentence, Senator Cancun https://t.co/hgRsrN11vQ

Just real quality stuff. Few things are better than seeing an unfunny person try to dunk on an actual funny person only to have the ball slapped out of their hands. Lucky for us, Cruz could not leave well enough alone.

I wear your scorn with pride.

I remember when the Daily Show was funny. https://t.co/swFSRNnTwc

Just the weakest of comebacks. Real amateur stuff. It also toes the line between “I’m the bigger man,” and “I’m still going to try to be funny.” It’s weak sauce in its thickest form. Cruz tried to take the high road while trying to get in the last word. It’s an aggressively cowardly move.

That’s probably why Noah responded by pointing out Cruz’s history of cowardice.

And with that Ted Cruz has officially fought back harder against a tweet from a late night show than he ever did when Trump called his wife ugly https://t.co/auWBOXEebh

That’s a toasty response right there. A fatality, if you will. A perfect reminder of just how much of a spineless slimeball Senator Cancun is. As of now, Cruz has not responded. Instead, he chose to appropriate an old Far Side comic in an attempt to take a shot at Congress. It turns out that, while Cruz is still dumb enough to think he’s funny, he’s smart enough to know when he’s been absolutely smoked.

← Conan Talking To JB Smoove About Pies Is Oddly Soothing | Reddit Asks the Question: 'What's the Most Petty Thing a Neighbor Has Done to You?' →