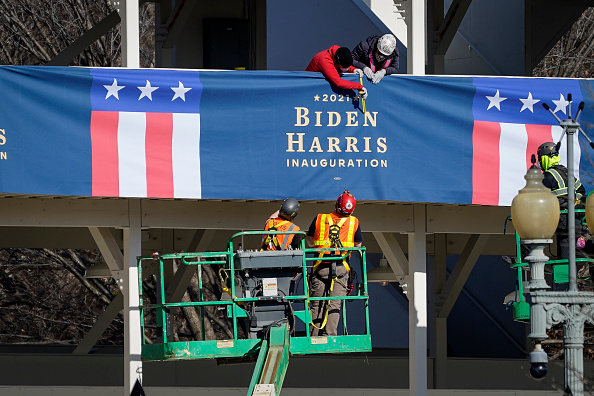 11:30 — Two days ahead of the inauguration, Kamala Harris is resigning so that she can occupy the position of Vice President. There are now no Black women in the Senate.

Kamala Harris has submitted her resignation from her seat in the U.S. Senate.

"As I resign from the Senate, I am preparing to take an oath that would have me preside over it." https://t.co/i9jdv9eCdQ

"We saw congress[woman] Boebert taking a group of people for a tour sometime after the 3rd and before the 6th." — Rep. Steve Cohen says he and a colleague saw Rep. Boebert giving people a tour of the Capitol in the days leading up to the riot pic.twitter.com/dNPymWqjPY

Boebert is a big fan of Ted Cruz, by the way.

Ted Cruz is an American hero and patriot! On January 6, we’re both going to be fighting for freedom! pic.twitter.com/cwyBfJEhex

11 a.m. — Hopefully, it’ll be a very boring day, and there won’t be many updates. But, if you were wondering, here’s what Trump is up to today. He’s preparing to throw his lot in with Rep. Marjorie Taylor Greene.

Trump remains fixated with getting revenge on R members who voted against him on impeachment, per several advisers. Has begun to closely watch and praise Rep. Marjorie Taylor Greene. Is talking about pardons nonstop and still telling advisers that he really won the election.

9 a.m. — Good morning. Happy MLK Day. There are two days remaining of Donald Trump’s exhausting, traumatic, four-year term. Ahead of Joe Biden’s inauguration, the FBI is vetting all 25,000 members of the National Guard tasked with securing the inauguration, out of fears of an insider attack. A very large number of people in the United States have been radicalized by a deadly combination of Donald Trump, Fox News, QAnon, and white supremacy, and they’re not all neckbeards living in their mom’s basement. They are cops, and lawyers, and real estate agents, and maybe the National Guard would be wise to do a little racial profiling of white people this week. From the AP:

The major security concern is an attack by armed groups of individuals, as well as planted explosives and other devices. McCarthy said intelligence reports suggest that groups are organizing armed rallies leading up to Inauguration Day, and possibly after that.

Meanwhile, unsurprisingly, the AP is also finding that Trump campaigners and other allies helped to organize the rallies that led to the Capitol insurrection. The Wall Street Journal, meanwhile, reveals that the leader of the Proud Boys — citing Trump’s rhetoric — sent a message to 7,000 of his followers on Telegram suggesting that they “invade” the Capitol.

I mention this in part to show what kind of people were behind the Capitol attack, but also to show that the attack — and potential future attacks — are endangering the very platforms these Trump supporters and white supremacists use to organize. Parler has been shut down, 70,000 QAnon followers were booted from Twitter last week, and now Apple is being sued, demanding that it remove Telegram. If there is any more violence, we will probably see services like Telegram and Signal pulled from app stores, because Big Tech will have little choice in the matter. There’s a difference between free speech and incitement, and what Telegram is being used for right now is the latter. It’s a shame, too, because Telegram was originally developed so that users could shield their communications from autocratic regimes. And now we have supporters of a wannabe autocratic regime using it to incite violence.

Speaking of QAnon white supremacists, Rep. Marjorie Taylor Greene is causing all sorts of problems for the GOP. She’s not only planning to file a ridiculous impeachment article against Biden on Inauguration Day, but she’s just been suspended for 12 hours from Twitter for repeatedly endorsing the QAnon conspiracy theory and spreadingly baseless claims about the election. She’s legit going to get herself expelled from Congress.

Marjorie Taylor Greene is essentially the personification of all our moms Facebook profiles brought to life by Dark Magic and methamphetamines.

— Elsewhere, Rudy says he won’t be a part of Trump’s impeachment team because of a conflict of interest (he, uh, helped instigate the riot). Also, Trump has lost faith in him, although it’s unclear if Trump will have any legal team to defend him.

— Finally, Trump plans to issue around 100 pardons and commutations tomorrow. It’s unclear if he and his family will be among them. If Trump does try to pardon himself, ironically, he may open himself up to more exposure, because he’ll look guilty heading into an impeachment trial. Meanwhile, it looks like dozens of people have been selling their access to Trump in the hopes of getting their clients pardons, although apparently, this is not completely illegal (just shady as hell).

All I know is, if Trump tries to pardon any of the insurrectionists, shit is going go sideways real quick.

“I would like a pardon from the President of the United States.”
Dallas area realtor Jenna Ryan is the 2nd D.C. riot participant to ask for one. She flew on a private jet to D.C. to “stop the steal.” FBI arrested her today. She says: I feel persecuted. pic.twitter.com/Rk4XCYVqX3

Two days. About 50 hours left, as of this publication. What’s that crazy motherf**ker gonna do?