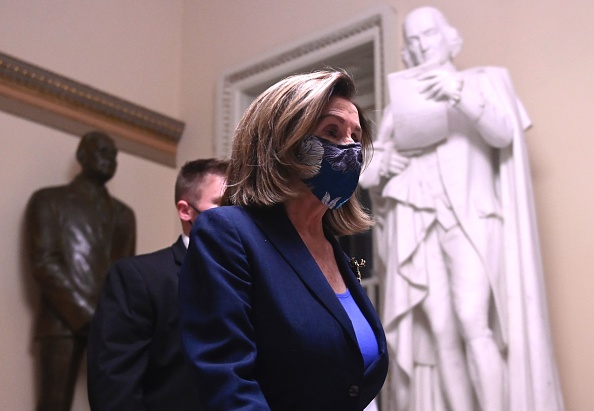 The President released a video, which seemed specifically targeted toward Mitch McConnell, as though to say, “Look! I said the right words? We good now?” I’m not going to post the video.

After one week of near-silence, the twice impeached president has released a video statement that the press was not allowed to attend in which he condemns the actions he incited last week.

On CNN @jaketapper points out this is the most bipartisan impeachment in American history, based on votes from House members from the presidents party.

5:15 — Meanwhile, underneath a mountain of coke:

4:56 — F*ck Mitch McConnell and all the caveats, but I almost think this is fair. The next seven days are going to be insane enough.

McConnell says Trump's trial will not happen until next week. “In light of this reality, I believe it will best serve our nation if Congress & the executive branch spend the next 7 days completely focused on facilitating a safe inauguration and an orderly transfer of power."

4:23 — It’s official. Trump has been impeached for the second time. It will now move on to the Senate, which is not expected to pick it up until at least January 19th.

BREAKING: Donald J. Trump has just become the only President of the United States to be impeached, twice, in U.S. history. He was impeached for incitement of insurrection against his own government.

4:15 — They’re currently voting. It’s clear it will pass, although with few GOP votes. So far, there have been 8 GOP votes, which is enough to make it a “bipartisan” effort. I guess.

Jenna and Barbara Bush attended Obama's inauguration and Chelsea Clinton attended George W. Bush's so not really clear what precedent is being cited by the White House here. https://t.co/CiZwsLZzgg pic.twitter.com/8kdyqxX1iW

Leaders of this movement are defined by having great privilege while feigning martyrdom and one couldn't sum it up with a more apt visual. https://t.co/Ik6FLQ7qrp

Republican Chip Roy: "The president of the United States deserves universal condemnation for what was clearly, in my opinion, impeachable conduct, pressuring the vice president to violate his oath to the Constitution." But he then says he will not support the article as drafted.

1:48 — This guy is the 6th House Republican to publicly state he’d vote for impeachment.

1:33 — The House Republican leader at least isn’t defending Trump, but he is trying to find a way to get around impeaching him.

Kevin McCarthy …. [squints at notes] ….. welcome to the resistance? pic.twitter.com/ij3seZOCw1

1:15 — The House will vote yes on Impeachment this afternoon. Pelosi will take the Article straight over to the Senate. McConnell, however, told Schumer that he would not call an emergency session to take up impeachment. He’s going to wait until the Senate regularly returns to session on the 19th.

NEWS —> McConnell’s office called Schumer’s people today + told them McConnell would not consent to reconvening immediately under the 2004 emergency authorities, a person familiar says. So the Senate won’t reconvene Friday, or almost certainly before Jan. 19. Trial in Biden term

"They want to cancel the president" — Jim Jordan pic.twitter.com/ttM0wzF8Bi

11:56 — AirBnB doesn’t want ANY part of it. What does Airbnb know about the people who have rented out places in D.C. that week, I wonder?

We have canceled all Airbnb reservations in DC for Inauguration week.

Guests will be issued a full refund and hosts will still be paid in full for these canceled bookings. https://t.co/K67zaRqdKJ

Meanwhile, the House GOP is lunacy. Some are now trying not to impeach Trump, but to boot Liz Cheney.

🚨NEW .. the right moves on ⁦@RepLizCheney⁩

Just got my hands on this petition which is calling for a special conference to oust the no 3 Republican for supporting impeachment. pic.twitter.com/gAXeIGza3P

Contrast that with this:

Crow is right. Numerous House Rs have received death threats in the past week, and I know for a fact several members *want* to impeach but fear casting that vote could get them or their families murdered.

Not spinning or covering for anyone. Just stating the chilling reality. https://t.co/K523T9oP91

10:50 — Impeachment hearings are ongoing for much of the day. The actual vote is expected to come around 4 p.m. According to Rep. Steny Hoyer, they are going to send the Article over to the Senate immediately, which means that an impeachment trial will happen sooner rather than later — it can’t start until the 19th, so it’s likely to run concurrently with Biden’s First 100 Days.

It also appears that there’s a better chance of the Senate getting the 17 Republican votes necessary to impeach than getting the same number of (unnecessary) votes from the House GOP, most of whom are still mired in Trumpism. Those dark red gerrymandered districts have produced some real nutjobs, some of whom were apparently in on the insurrection.

Rep. Val Demings has just confirmed to @CNN that she believes "there was some inside assistance" for the Capitol rioters.

And those people? I mean, when you’ve lost Wal-Mart?!

UPDATE: A few days ago @Walmart said it would conduct a "review over the coming months" about its political donations

Corporate America is trying to tell Congress something. Will they listen?

Punchbowl News: Rep. Peter Meijer, a newly elected Republican from Michigan, apologized to the police for his GOP colleagues who freaked out about the metal detectors installed to protect them. "I am sorry some of my colleagues are being assholes."

A key organizer of the Capitol Protest, extreme right wing radical Ali Alexander says that he was getting help from 3 Republicans @DrPaulGosar @RepMoBrooks @RepAndyBiggsAZ

These 3 seditionists need to be charged by the @FBI

These are quite literally the things that incite insurrections. Four years of programming people with this message. This is also quite literally anti-democracy. Let’s get rid of this “DC for fame” culture that this exemplifies. https://t.co/e9F6CkOiT0

The attack on the Capitol was coordinated and planned.

Here are the insurrectionists talking about the plan, including detailed schematics of the Capitol building.

We’ve also learned that one of the insurrectionists had Ted Cruz’s contact information in his truck.

The impeachment debate has just begun, and by the end of the day, Donald Trump will be the first (and probably only) President in the history of this nation to be impeached twice. He may ultimately be the first who is convicted by the Senate, because that’s the way things are moving, with McConnell backing impeachment efforts. Some of the Senate Republicans who declined to impeach the President may be doing so because they’re afraid of Trump’s supporters, of the violence they may inflict upon not just their careers, but on their bodies.

In fact, in the last 24 hours — as more and more information comes to the surface — the tone of all of this has shifted. This is not just about removing Trump from office, this is also about concerns of more violence. Political assassinations, lynchings, storming statehouses — that kind of violence. There are hundreds of thousands of these extremists — white supremacists and QAnon supporters — and they’ve been driven off of social media and into the fringes, on Telegram and Signal, where they’re trying to organize more violence, and they’re doing so on encrypted services that make it harder for authorities to track.

This is what a lot of Republicans are beginning to understand about these groups: They’re coming after them.

The Republican party has created a monster that has consumed the party, but that also may destroy it from the inside. Trumpism is f**king scary, as we have seen with the videos and images that have come out of the insurrection. These people are violent extremists, they do not fear consequences, and they may not stop until they have reclaimed the Presidency for an unhinged, deranged authoritarian. I am not being dramatic. I am not being hyperbolic. There will be more violence.

A lot of Republicans — the rank-and-file are just now waking up to who they are really in bed with, and Donald Trump is only going to make it worse until he’s essentially impeached himself. In an email this morning, my father-in-law — one of those bad-ass hippie farmer live-free-or-die sons of bitches who lives in rural New Hampshire — laid it out. I think he’s right:

Two things could, and probably would swing the Senate 2/3, and the second is violence at the inaugural.

But much more definitive will be Trump’s impending pardon of himself.

He has just lost hundreds of millions in corporate business accounts. He’s deeply in debt to Deutschebank, which is not in a position to want to be identified with him anymore. He’s likely to be indicted on any number of counts in New York state (and shame on New York State for not throwing the book at him years ago, but that’s another story.)

He has basically got an Evil Knievel-level need for attention, a Jeffrey Epstein-level of legal liability, a “reality” fixated on fantasies of “getting back what belongs to him” in 2024, and a metabolism fueled by Diet Coke.

So … he pardons himself and his kiddos, but he has to do more than that because he has to keep his base (as he perceives, or has been led to perceive it). So, in addition to Rudy Giuliani and a few dozen others, he waves his wand over everyone indictable for the events before and during the violence on the 6th.

I think he’s absolutely right. Meanwhile, Ivanka Trump — after all this — thinks she’s going to ride it out and become the President herself one day, and all she needs to do is attend Biden’s inauguration.