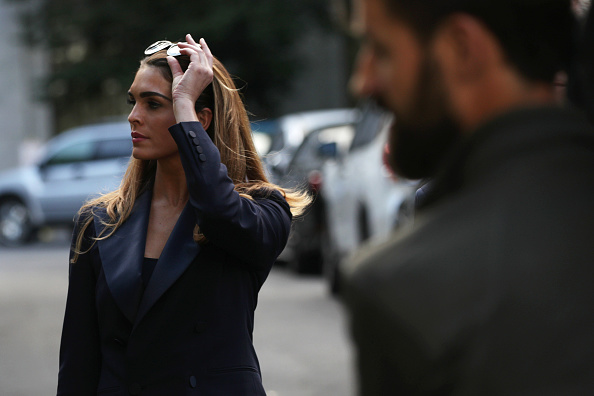 After close review of recent Tweets from the @realDonaldTrump account and the context around them we have permanently suspended the account due to the risk of further incitement of violence.https://t.co/CBpE1I6j8Y

4:45 — Lisa Murkowski, a Republican Senator from Alaska with an independent streak (she actually voted against Kavanaugh), has called upon Donald Trump to resign, as she questions whether she belongs in the party. “I want him to resign,” she said. “I want him out. He has caused enough damage…He’s been inside the Oval Office fuming and throwing every single person who has been loyal and faithful to him under the bus … He doesn’t want to stay there. He only wants to stay there for the title. He only wants to stay there for his ego. He needs to get out. He needs to do the good thing, but I don’t think he’s capable of doing a good thing.”

The in-fighting among Republicans, meanwhile, continues.

A former senior White House official tells me that their response to @JasonMillerinDC is: “Oh fuck right off.” https://t.co/eslW5200pV

4:35 — Optimistically naive as it may be, I like the idea that the nation is slowly returning to 2016, shedding any trace of these people, one by one.

General Flynn and Sidney Powell’s Twitter accounts have been permanently suspended as part of Twitter’s crackdown on QAnon accounts and accounts that engage in coordinated harmful activity. pic.twitter.com/TptbGsAKvX

David Perdue concedes race. “Although we won the general election, we came up just short of Georgia’s 50% rule, and now I want to congratulate the Democratic Party and my opponent for this runoff win.” Loeffler and Perdue both have conceded.

And if you haven’t seen this yet? I mean: F**k the Trumpers. But also, f**k Lindsay Graham. He made his bed, and now his bed is harassing him in an airport.

Check out Lindsey Graham being mobbed by his fans (Trump Supporters) at Reagan Airport…pic.twitter.com/cDqpOreBZy

1:07 — Symbolically, this may be a big deal because she’s so close to Trump, but practically, it means absolutely nothing. Nothing.

Breaking on @MSNBC: Hope Hicks is planning to leave the Trump admin next week — ahead of the inauguration.

Reddit, meanwhile, is banning the /DonaldTrump subreddit (imagine being the President but being too toxic for Reddit).

🚨This is a huge move for Reddit, which drew ire from fringe right users in June when it banned r/The_Donald subreddit along with 2,000 other subreddit groups and users that violated its new content policies aimed at hate speech.https://t.co/a72b3rfmLU https://t.co/sbx52KFNY2

11:50 — Pelosi is two steps ahead, trying to block Trump’s access to the nuclear codes.

Pelosi to Dem colleagues: "This morning, I spoke to the Chairman of the Joint Chiefs of Staff Mark Milley to discuss available precautions for preventing an unstable president from initiating military hostilities or accessing the launch codes and ordering a nuclear strike."

NEW: Pelosi says she spoke to the chairman of the joint chiefs about preventing Trump from accessing the nuclear codes.

"The situation of this unhinged President could not be more dangerous." pic.twitter.com/GItVGehUr9

The Daily Beast is also reporting that they are trying to prevent Trump from starting more conflicts, either domestic or abroad. “Officials have also discussed other strategies for how to limit Trump’s capacity to do harm—from limiting the flow of some information to the president’s desk to slow-walking certain geopolitically sensitive decisions.”

11:00 — I am hoping that I won’t be updating this post all day long again, but now that he’s got his Twitter account back, Trump is slowly dipping his toes back in. Here he is winking at his supporters, basically saying, “They made me make last night’s video.”

The 75,000,000 great American Patriots who voted for me, AMERICA FIRST, and MAKE AMERICA GREAT AGAIN, will have a GIANT VOICE long into the future. They will not be disrespected or treated unfairly in any way, shape or form!!!

And then, here he is admitting that he’s a sore fucking loser.

To all of those who have asked, I will not be going to the Inauguration on January 20th.

I am glad of this, lest the story of the inauguration become about him when it should be about never having to see him again.

9 a.m. — I said on Monday morning, and I said it again on Tuesday morning: As soon as the Georgia runoff was over, I predicted Mitch McConnell’s Republican party would dump Donald Trump and light him up like a firework in a trailer park at 9 p.m. 5 days after the 4th of July. It just happens, unfortunately, that the McConnell Republicans were given an easy offramp with the insurrection on the Capitol, although they would have found something, anyway. They rode that horse as far as it would go, and now that the horse’s leg is broken, they’re going to turn Trump into glue.

It’s an opportunistic party, although it’s true of all politics and true of most industries, too. I was listening to Henry Winkler on a podcast this morning talk about Hollywood, and how friendships in that city are built almost entirely upon need, and once that need is exhausted, most (though not all) of those friendships expire.

I’m not suggesting this so that someone throws a pity party for Donald Trump, who should be throwing beneath a prison cell and buried there permanently. I am saying that there is nothing noble about Betsy DeVos’ resignation, or Mitch McConnell’s split from Trump. Those people hated him from the beginning, and they hated his supporters even more. They’re abandoning ship because they have finally been given an opportunity to do so. Trump has given them cover to abandon him. The insurrection at the Capitol has broken the magic spell. Even the Trump kids have finally shut the f**k up on social media.

Speaking of which: Facebook has little use for Trump anymore, either, since he no longer determines their future. Twitter unsuspended Trump’s account last night so that Trump could release his video sort-of conceding the election, but Twitter is going to drop him at the next opportunity to do so. Social Media extracted all the followers they could out of him, and now they, too, are going to wring him out and flush him away.

Joe Biden would often say while he was campaigning that, if he were elected, the Republican party would come to its senses and break with Trump. He’s right, but maybe not for the reasons he thought. They’ll revert because they never liked populism to begin with. The Republican party will snap back into the party that no longer says the quiet part aloud — the white supremacy will remain, but they’ll hide it better behind state’s rights. Austerity will be “protecting the deficit,” which is to say: Supporting the wealthy. They’ll be just as evil and insidious, but they’ll hide it better than they have over the last four years.

As for Trump? Pressuring him into making that video last night to potentially spare him from the 25th Amendment might have also had the benefit of breaking Trump’s hold over his own supporters, who were livid that Trump had abandoned him to salvage what’s left of his legacy.

Even Fox News is jumping ship. In last night’s show, Tucker Carlson — TUCKER CARLSON — distanced himself from the President, although for him to come to this obvious realization after four years of Trumpism is absurd.

Tucker Carlson is distancing himself from Trump sharply tonight — saying that Trump is on his way out and that Trump only thinks about Trump. He told his viewers that they should ask themselves: who's thinking about them?

Channeling Trump populism into his own, in other words.

“He cannot come back from this,” Varney told viewers on Thursday. “I think President Trump, Donald J. Trump, is done, politically.”

When Varney’s guest, American Conservative Union chairman Matt Schlapp, argued that “we have to get through this moment before we understand what the political consequences are,” Varney replied, “I think the political consequences are beginning to unfold. I think the president is tarred with the brush of Wednesday, January the 6th. … I think the support for the president, within the Republican Party and the administration, is crumbling.”

Josh Hawley, on the other hand, seems to be sticking by the President. That’s not going well for him. From Axios:

Simon & Schuster announced it would be cancelling the publication of Hawley’s upcoming book, “The Tyranny of Big Tech,” saying it “cannot support Senator Hawley after his role in what became a dangerous threat.” David Humphreys, a Missouri businessman who helped fund Hawley’s first campaign, released a statement calling the senator a “political opportunist” and arguing that he “should be censured by his Senate colleagues for his actions.” Former Missouri Sen. John Danforth, who mentored Josh Hawley and called him a “once-in-a-generation” candidate, said supporting him “was the biggest mistake I’ve ever made in my life.”

No one is going to forget the role of Ted Cruz and Josh Hawley in this mess.

A policeman was beaten to death by a fire extinguisher in the halls of the United States Capitol by white supremacist domestic terrorists inspired to act by Trump, Hawley, Cruz, and other racist Republicans.

Then they all fundraised off it.

This is what happens to the other grifters:

There’s speculation — especially after a police officer died of injuries sustained during the insurrection — that Nancy Pelosi will move to impeach Donald Trump today. They’re meeting to talk about it this morning and could vote on it as soon as next week. They want Trump to be held accountable. I agree. My only concern is that the political opportunists in the Republican party will use another impeachment process as an excuse to rally back behind Trump again. That said, without his social media platforms — or the ability to use them to incite his followers — I’m not sure that Trump will be able to mount much of a defense. Impeachment or not, I think he’s done. He got too close to the sun and incited a riot.

The smartest thing for Trump to do at this point is to do what the Wall Street Journal has suggested and resign.

← What is 'Virgin River' and Why is the Netflix Show So Popular? | Meghan McCain Thought Now Was a Good Time to Defend Josh Hawley →