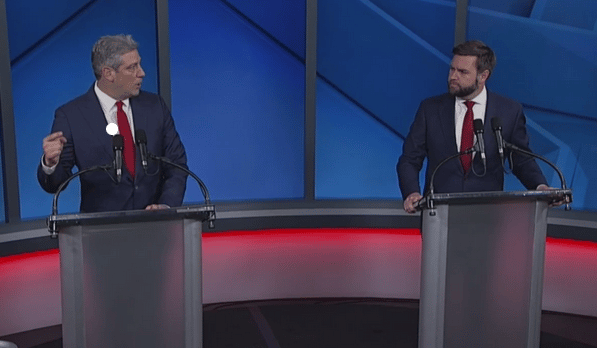 You didn’t think I forgot about Ohio, did you?

Last night’s debate between Ohio Senate candidates, Tim Ryan and JD Vance, probably left a few marks on Vance he’s not going to easily recover from. Let’s not get it twisted though; Tim Ryan is not the most liberal of Democrats. Out of necessity in The Heartland, Ryan defines himself as “independent” and leans to the right on important social issues. But JD Vance is an objectively terrible person and terrible writer. So, if we’re going to pick a side here, we have to go with Tim “Lesser Of The Two Evils” Ryan and hope he doesn’t become another albatross hung around the party’s neck.

Maybe it’s his “independence” that gave Ryan the confidence to go on the attack during last night’s debate. It’s something we rarely see from Democrats as they are often working to position themselves as the more thoughtful candidate in the face of raving lunacy. I thoroughly enjoyed watching Ryan deliver body blows during the debate.

Ryan also called out Vance’s A+ sycophantic Trump ass-kissing at an Ohio rally last week. One Twitter user was kind enough to splice in footage from the rally to really drive the point home.

What is it with guys like Vance, and Ted Cruz, who are so desperate for attention from Orange Fascist Daddy that they will literally eat whatever sh*t he dishes out? What is it with the people who vote for these guys? Toadies do not make good leaders. If you’re going to be into charismatic strongman officials you have to, you know, commit to that! These masochistic morons deserve nothing but the taste of boot leather in their mouths forever.

Here’s some local coverage of the debate if you want to watch the rest of it.