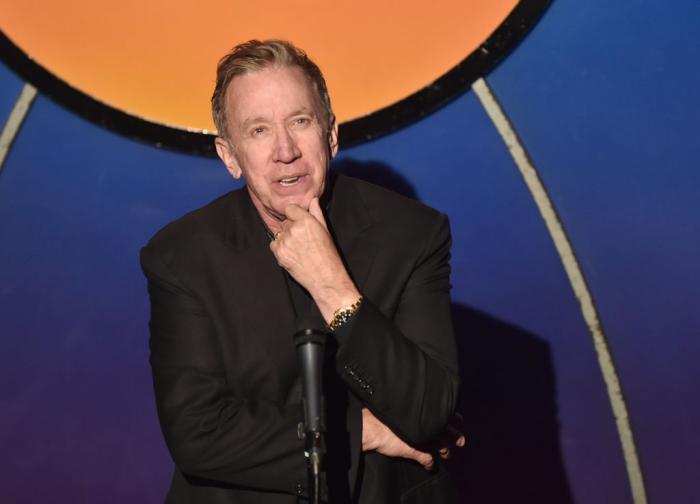 (This rant brought to you by Black Button Distilling’s Four Grains Bourbon. Currently in an old fashioned, but it’s also great in a Kentucky mule or over ice.)

Everyone needs a friend with great bad ideas. For me, it’s Kate. She suggested I pair cocktails with people or topics that annoy me. It’s a great idea because I do like drinking and being annoyed. It’s a bad idea because, well, my liver. So I was on the fence until Tim Allen opened his mouth. I was still vaguely annoyed by Patricia Heaton’s manufactured outrage about test pilot Buzz Lightyear being voiced by Chris Evans instead of 69-year-old Allen. So when Tim decided to tweet about “wokeness” and safe spaces, I broke out the shaker.

Who is the face of woke. Do wokees have a club house in someone’s backyard or maybe a cute yet safe playpen somewhere?

It’s uncanny how every single joke by a conservative comedian brings to mind the only funny thing the right’s ever said:

It’s in line with Allen’s other Mighty Casey-like swings at political comedy.

Took some kids to Disneyland and overheard a 13 year old boy wondering if he may be pansexual since he loves skillets.

Biden was on 60 minutes. I heard he asked how long the show was.

Rodney Dangerfield’s ghost read that and died all over again from secondhand embarrassment. But the actual definition of being woke aside — because I can’t accurately define it and you probably can’t either — there’s something genuinely funny about Tim Allen of all people making fun of backyard playpens and clubhouses when every major role he’s had for 30 years is predicated on Tim Allen needing a safe space to escape his wife. People tell me The Santa Clause isn’t actually about a man stealing Santa’s identity and moving to the North Pole to avoid his ex and Judge Reinhold, but it’s better if you pretend it is.

There’s a reason Tim “The Tool-Man” Taylor is synonymous with the man cave; he practically invented it. The phrase was first coined in 1992, shortly after Home Improvement went on the air. Tim, a paragon of mediocrity, was host of Tool Time, the Binford Tools-sponsored home improvement show where Tim usually hurt himself at least once an episode. He spent most of his time in his garage hiding from his much smarter, more empathetic wife (Patricia Richardson, not to be confused with Patricia Heaton), or in the backyard with his much smarter, more empathetic neighbor, Wilson (Earl Hindman), or on Tool Time with his much smarter, more empathetic co-star, Al (Richard Karn). Everyone on the show was either more intelligent than Tim or an actual teenage boy; this was the 1990s, after all, the pinnacle of the Dumb Dad Sitcom era. Tim’s hook was his tendency to overcomplicate manly duties, like slapping a motorcycle engine in a riding lawn mower. He was a good guy but rarely thought things through until the inevitable catastrophe, whether it involved power tools or a night out with his wife.

Tim’s man cave was his garage, where he would putter around with tools and heavy equipment. It was literally his safe space. Like Al Bundy before him, it was where he could avoid his wife and children without leaving the security of his own suburban property. On Tool Time, Tim would give other rooms the man cave treatment, including the “Man’s Bathroom,” a gleaming chrome monstrosity that makes it feel like you’re taking a dump in the Tin Man’s dentistry office.

Allen followed up Home Improvement with Last Man Standing, essentially the same show but with any semblance of subtlety removed in favor of political “humor.” Tim plays Mike Baxter, who works in a camping supply store called Outdoor Man, because otherwise, viewers might not understand that the woods are for manly men unfazed by mosquitoes or bear attacks. In his spare time, he parents his teen daughters, one of whom already has a baby, and gripes about society on his vlog. His Facebook profile picture undoubtedly includes his pickup’s driver seat and a pair of aviators. He’s the guy who thinks his LETS GO BRANDON lawn sign is a scathing commentary on American politics. The laws of geometric progression suggest Allen’s next show will have him working as a Walmart greeter and making TikToks about why Kanye is the only hip-hop artist with any sense.

I’m not knocking the concept of a man cave or Tim Allen\Taylor\Baxter’s vision of what those spaces would look like. Everyone should have a place they feel comfortable and secure, whether it’s in their home, outdoors, or in a communal space like a library, tavern, or student space. Including Tim. What frosts my nuts is the implication that no one else deserves it. That a comfortable space has to be coated in chrome or fake wood paneling, smell like cigar smoke and yesterday’s baked beans, and have a vintage Kathy Ireland poster on the wall. You know the one. Even the term “man cave” recalls the time when mighty Pleistocene hunters hid in holes from saber-tooth tigers and thunderstorms. Now they’re used for hiding from wives and pronouns.

Allen’s entire professional career has been one safe space after another ever since he left cocaine smuggling behind. Middling sitcoms, voicing Buzz Lightyear, and whatever you call Wild Hogs. There’s no stretch there, no risk. He just plays himself. So dial it back, Tool Man, or the networks might not sign off on your next comedy about a middle-class white guy with a stereotypical job and small media presence who doesn’t understand the rapidly changing society around him.