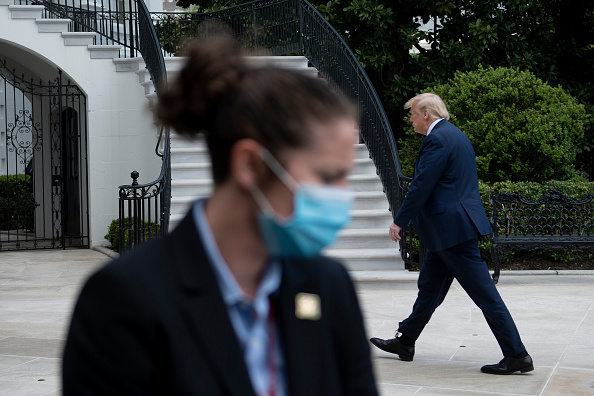 The #Trumpstink Is Real, and It Does Not Wash Off

Good morning, and Merry Christmas Eve. I hope you folks don’t spend too much time today (or over the next few days) grousing about politics. I also hope that Trump signs that goddamn stimulus bill so that 13 million people do not lose their unemployment benefits on Saturday, and that the government does not shut down on Monday. I am not hopeful. Trump is on vacation for a week, and I believe if he tries to pocket veto the bill, a new Congress will have to take it up all over again on January 3rd. The Democrats, meanwhile, are trying to pressure Republicans into giving Americans the $2,000 direct payments Trump is asking for (that is not going to happen, folks), while the Republicans are trying (badly) to make this about foreign aid and blame it on Democrats (nevermind that the GOP approved all of the foreign aid in the budget).

I don’t know what’s going to happen. I don’t know that anyone knows what’s going to happen. What I do know is this: Trump’s approval rating continues to fall — it’s dropped 7 points since election day, to 39 percent, while Joe Biden’s approval rating for the transition, believe it or not, is 65 percent. That is impressive in a country this divided. The message of unity and competence must be working.

Trump is obviously bringing all of this on himself, threatening to declare martial law, refusing to concede, stewing over conspiracy theories, blowing up much-needed legislation, and ignoring a pandemic that has been raging across the country. A majority of people already believe he is the worst President in the United States, and his behavior during his lame-duck session is going to hurt his legacy.

I know he is torching the entire Republican party right now, from loyalists like Bill Barr to his biggest defenders, like Mitch McConnell. He’s gone after John Thune and Brian Kemp, and he even has Mike Pence in his crosshairs now. I know he wields an enormous amount of power over the Republican party, but eventually, there won’t be anyone left except Matt Gaetz, Devin Nunes, and Ted Cruz.

What I am most excited about, however, is this: Nicolle Wallace going after Chris Christie for not effectively separating himself from Trump.

Here’s @NicolleDWallace with zero fucks left for the bullshit: pic.twitter.com/0BE4f0wsLk

Four years is a long, long time (as we all know because the last four years have been the longest 3 decades of our lives). I don’t think that Biden is correct in thinking that things will snap back to normal, but increasingly, I do believe that enough people will see Trump for who he is that he will be seen as a toxic element in the party sooner than not. Republicans will have to separate themselves from Trump in order to have a chance in 2024, and that’s obviously bad news for people like Ted Cruz, Mike Pence, and even Nikki Haley. Democrats and the media — including Fox News at their first opportunity, since Trump turned on them — will spend much of the next four years rightfully vilifying Donald Trump, and by the time the next election rolls around, it won’t just be Nicolle Wallace — an MSNBC anchor (who also happened to work for George W. Bush) — grilling politicians like Chris Christie over their associations with Trump, it’ll be everyone else.

Part of the reason that Barack Obama won in 2008 — in addition to being brilliant and charismatic and the best President of our lifetimes — is that he was able to separate himself from Hillary Clinton on one of the central issues of the time: Did you support the invasion of Iraq? Hillary did. Obama did not. That was incredibly significant at the time.

In 2024, 2028, and beyond, the most significant question for Republicans will almost certainly be: Did you enable and/or support Donald Trump? The Trumpstink is real, it’s getting more foul, and nothing will wash it off.

Reminder: Voting for the Pajiba 10 will begin this afternoon and run through Monday, so get your lists ready!

← Hilaria Baldwin's Fake Spanish Accent Is the Holiday Tea I Didn't Know I Needed | This One's For The Theater Kids: Twitter Reacts To Broadway Bro Challenge →