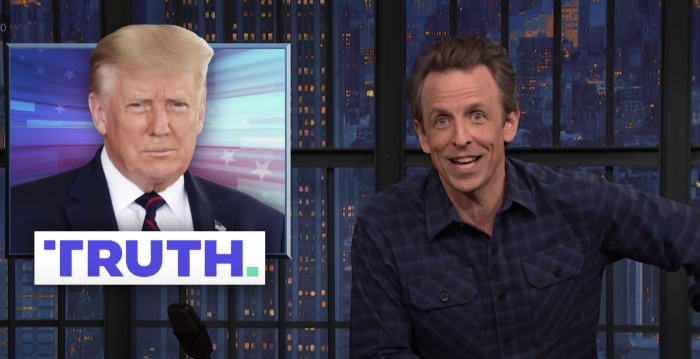 The Rollout of Donald Trump's Twitter Clone Sputters, and Seth Meyers Has the Jokes

It’s all very pointless, isn’t it?

Still, it’s nice to keep up with conservative bullsh*t without having a rage-stroke, which is why Seth Meyers’ “Closer Look” segments are such a treat. It’s everything you need to know about political Twitter in 10 minutes or less. Did you see — and gloss over — an unusual number of Hillary Clinton mentions on your feeds last week? Well, Seth Meyers explains where that came from in about 90 seconds. Did you know that Donald Trump’s new social media network launched yesterday and immediately ran into problems and that Devin Nunes — who runs Truth Social — assured users that they’d have Truth Social up-and-running properly by … the end of March. Seth’s got the details and the jokes to make it go down easy without affecting your blood pressure.

It’s funny: Fox News is successful because Roger Ailes decided to go after and corner an untapped market of conservative viewers, just as Rush Limbaugh had done on radio. It succeeded because all the other sources for news had to split the audience made up of people with common sense while Fox News got 35 percent of the market all to itself. But now the conservatives have several social media platforms — Parler, Gab, GETTR, and now Truth Social — all vying for the same slice of conservative wingnuts. None of them are going to be particularly successful, however, because goading liberals is part of the conservative business plan, and if there are no liberals to goad on these platforms, they have nothing to do but turn against one another, which we’ve already seen on GETTR. I look forward to more intraplatform squabbles. The best thing about all the conservative platforms — these bastions of “free speech” — is that they all now have moderation AI, which delete posts and ban users who break their social-media policies. lol.