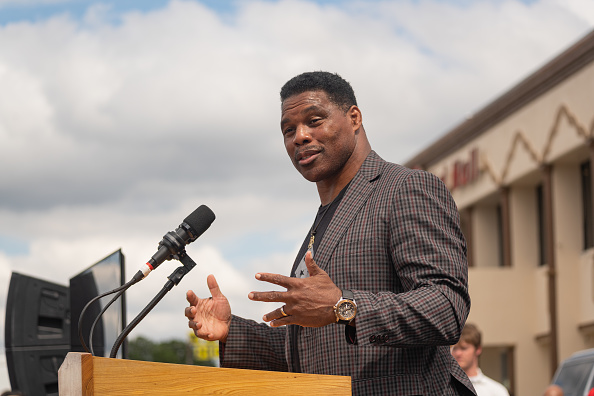 Herschel Walker’s campaign for Senator is a hot mess. It’s not just that the man is dumb as a bag of hair, that he has no idea how to tell the truth, doesn’t understand evolution or global warming, or that he has a history of extramarital affairs and fathering children out of wedlock that he’s kept hidden from the public. Now it’s surfaced that Walker paid for a woman to have an abortion, and not just any woman: One of the very women who gave birth to one of Walker’s children.

Walker denies it, but no one believes him, including his right-wing influencer son, Christian, who has been posting screeds about what a terrible, violent, absentee, lying father Herschel has been. Herschel spoke with reporters yesterday and tried to clean up his mess. He failed. Badly.

Herschel Walker just held a gaggle with reporters in Georgia and MSNBC carried it. It did not go well. pic.twitter.com/etIBF8Ufbu

In an op-ed in The New York Times this morning, Nate Cohn asked, “Will it matter?” It’s a good question, actually, because before the abortion bombshell dropped, and despite everything else, Walker was polling within the margin of error against Raphael Warnock, who is a solid candidate with no major red flags. Cohn believes that, ultimately, this development will matter, and I agree, but I also think that it won’t matter that much.

In fact, as much sh*t as I might give Republicans for voting for a man clearly unfit to hold the office, if I were in their shoes, would I vote for Walker?

Here’s a thought experiment. Let’s say that, instead of the race being between Herschel Walker and Raphael Warnock that it’s between Jeb Bush and … Michael Avenatti. Avenatti is a bad man. In fact, he’s been convicted of fraud, embezzlement, identity theft, and wire fraud, and he’s been sentenced to four years in prison. He also has a domestic violence complaint lodged against him. (There is nothing in the Constitution that prevents either convicted felons or people in prison from running for elected office).

So, in this theoretical matchup, would you vote for Avenatti? Or Jeb Bush who, at the very least, isn’t pro-Trump. I mean, he basically stands for everything that Democrats are against, but at least he’s not MAGA. And before you decide, remember this: The balance of the Senate is at stake, which also means President Biden’s ability to get anything done over the next two years may depend on your vote. If the Republicans take the Senate, there’s no hope whatsoever of voting reform. The next two years will be nonstop Hunter Biden investigations that will invariably hurt Joe Biden’s chances of reelection in 2024. The future of democracy could very well be at stake.

If you answer the way that I probably would, then that’s why the abortion bombshell may not matter that much in Georgia. However, not everyone in Georgia is a Democrat or a Republican. There’s still a sliver of folks who remain independent, who may vote based on the candidate and not the party, and who are less interested in who controls the Senate and more interested in which candidate is the most qualified for the job. Those people, hopefully, will tilt the race toward Warnock.