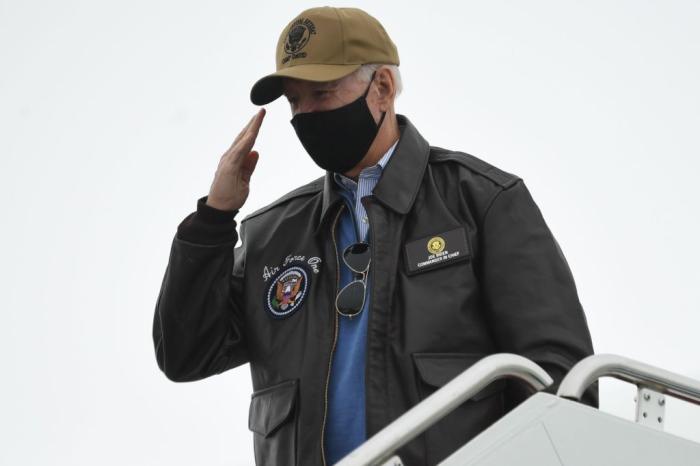 The One Thing Democrats and Republicans Always Agree On

That didn’t take long. Joe Biden has been in office for just over a month, and he’s already partaking in that favourite hobby of the office of the American president: Bombing brown people (to borrow a phrase from the late, great George Carlin).

Last night, the Biden administration launched airstrikes on eastern Syria. It called the bombing a ‘proportionate military response’ to a recent attack against US military personnel in Iraq. Which is a bit like if I stormed into your house, killed half your family, robbed you of your most precious possessions, and then when you complained, I also killed your cousins who lived next door and said, ‘Well if you didn’t complain I wouldn’t have had to do that’. (Not that next door, though. In the other direction. I’d already flattened the other house and the people inside it earlier. Oh, and also, this isn’t the first time I’m in your house doing this.)

‘Proportionate military response’ is one of those non-phrases most beloved by the US military and its associated propagandists in the media. It sits right alongside ‘defend US interests’. The latter is really useful because it can be used to explain away virtually any act of unspeakable aggression around the world. I’ve seen it used already in response to the latest Syria strikes. It was trotted out when the US invaded Iraq in 2003. It’s a near-certain refrain any time the US backs a fascist coup abroad. ‘Defend US interests’ is a very revealing phrase, because in its universal application it implies that everywhere is under US jurisdiction. Everything belongs to the empire.

The US bombing Syria complemented 100s of Israeli strikes, sadistic US "Caesar" sanctions that starve ordinary Syrians, depriving them of medicine and food while US troops and their proxies occupy Syrian oil and wheat fields, depriving the country of revenue and bread. Savagery.

That’s a starker way of putting it than the public relations/propaganda arm of the US government likes to put it to the public, though behind the scenes these things are more readily admitted. This is why out of all the political issues, ‘war’ is the one that most often gathers support from all across the mainstream political spectrum in the US. Democrat, Republican, it doesn’t matter—‘war’ is an a priori good. Bush destroyed Iraq. Obama laid waste to Libya. Military interventions are voted on overwhelmingly. Military budget increases are waved through. In the heart of empire, war brings people together. As I wrote in my piece on Boris Johnson’s commentary on post-invasion Libya:

The destruction of Libya at the hands of Nobel Peace Prize-winning Barack Obama and capable, smart Hillary Clinton ranks alongside Iraq as a supreme affront to human morality and decency. Many of America’s most bloody interventions abroad have been initiated not by Republicans but by the Democratic Party, which in America functions often as a salve for the troubled souls of conscientious liberals. As long as it pays lip service to social issues and claims to stand on the right side of history when it comes to domestic policy, it may continue to project US power abroad, whatever the human cost. Liberal commentators in the press will always line up behind it and bang the drum of ‘humanitarian intervention’ and enlightened scholars and experts will give it academic credence.

I’ve been using quote marks around the word ‘war’ because it’s not really the right word for what the United States practices around the world. To paraphrase Bill Hicks, war conjures up imagery of two, implicitly roughly equally matched sides fighting against each other. What the US is involved in, in a ceaseless campaign around the world, is not war. It’s systematic destruction. It is a bear tearing apart beehive after beehive and getting fat off the honey within. Because of media saturation and rose-tinted spectacles, when we think of the word ‘war’, we tend to think of World War II. The United States loves to trot out the memory of that war to remind people that its military was once used against a deserving foe. It’s a great, cruel irony, then, that in the decades since that war, to nations like Iraq, Vietnam, Afghanistan, Libya, Syria, Laos, Cambodia, Angola, Lebanon, Somalia, Sudan, and many others, in any modern analogue of the Second World War, the US military has played the role of the Nazis. A malevolent, imperialist, invading force with a body count in the millions. (And that’s just the military. Don’t worry, Krasinski, I haven’t forgotten about your boys in the CIA. There’s just only so much time in the day.)

Joe Biden has only been in office for a month, and he is already continuing the unbreakable tradition of the American empire. It makes sense that he is. The underlying animus of that empire, after all, is profit. And war is some of the best business there is. In the decade following the Iraq war, construction company KRB—the ex-subsidiary of Halliburton, once run by Dick Cheney—was awarded at least $39.5 billion worth of federal contracts in the ravaged country. The predecessor companies out of which KRB formed were handed similar contracts in Vietnam. KRB may have been the biggest beneficiary in the ten years following the invasion of Iraq, but the total value of contracts handed out in that period (it has of course kept on increasing since) exceeded $138bn—for everything from building power plants and other installations to providing things like security and toilet paper. Oil and geopolitics were only a part of the motivation behind that brutal invasion.

Now, in Joe Biden’s administration, we see the cold logic that powers the scenes behind the curtain continuing. Earlier this year, Biden announced his pick for Secretary of Defense: Retired General Lloyd J. Austin III. The retired general sits on the board of multi-billion weapons company Raytheon. Late last year, Raytheon was awarded a contract that could be worth up to $20 billion for building a new generation of nuclear-armed cruise missiles. According to the NYT:

And Raytheon — whose 195,000 employees make fighter jet engines, weapons, high-tech sensors and dozens of other military products — spent the past several years selling billions of dollars’ worth of weapons and radar systems to allies in the Middle East, some of which were used to fight a war in Yemen.

Raytheon is not General Austin’s only link to military contractors. He has also been a partner in an investment firm that has been buying small defense firms. And his move from the weapons business to a leadership role in the Pentagon continues a pattern begun by President Trump in recent years.

The US military is the biggest threat to global peace in existence. Not just a ‘threat to’, but ‘constant disruptor of’. Both directly in terms of the violence it already inflicts upon the world, but also by virtue of being one of the single biggest contributors to global hydrocarbon emissions. There is no graver threat to global stability than the climate collapse that is being hastened by the actions of entities like the US military.

But who cares about all that? War is great business. The profits can’t be allowed to stop.

← Sir Ian McKellen Urges Entire Queer Community To Support Trans People | What Is Up with the Terrifying Art, Jason Mantzoukas? →