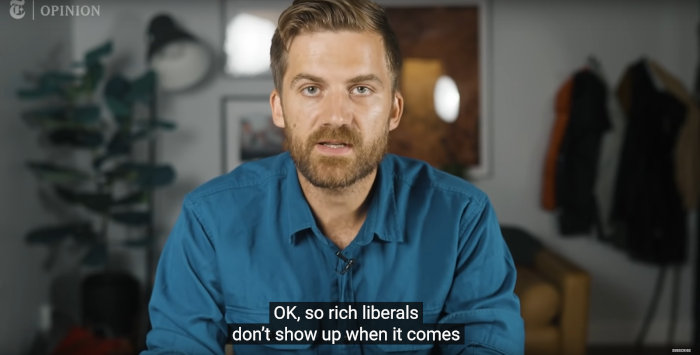 ‘Liberal Hypocrisy Is Fueling American Inequality’: I Can't Actually Believe I Agree With Something the New York Times Has Said

In the immortal words of Black Sabbath: ‘What is this that stands before me?’
Except where Ozzy and the lads were struck with paralysing dread at the sight of a horrifying figure in black straight out of a living nightmare, I find myself gazing slack-jawed at something far more inexplicable.
The New York Times making sense!

The New York Times is one of the most powerful pillars of the American establishment. As such, it plays a pivotal role in shaping national (and international) opinion and taking the lead on how The News is framed and presented. It is also often painted as a ‘liberal’ outlet. In the demented funhouse of American political discourse, I suppose that is relatively true. Objectively speaking, though, it’s nonsense, of course. Just because you find yourself to the left of Fox News doesn’t mean you get to call yourself progressive.

We’ve had a pop at the august institution that is The New York Times before here at Pajiba, most often at the gibberish that regularly comes tumbling out of their opinion section. Yet it’s not their opinion pieces that serve the Times’ structural function—the propping up of the status quo—though they do contribute too. No, what ensures the paper’s place in the maintenance of the status quo is their ‘straight’ reporting, which plays up the age-old myths of an unbiased media while accepting all the underlying ideological orthodoxy that the powers that be dictate.

The clearest example of this is the paper’s unwavering support for the United States’ imperial agenda. It’s barely an exaggeration to say that The New York Times has yet to meet a US war that it didn’t love. In 2002 and 2003, as the Pentagon ramped up its propaganda campaign to prepare the nation for its brutal invasion of Iraq, The New York Times—bastion of American liberalism—beat the drums of war as hard as anyone else, providing ideological cover and respectability to what some refer to as the supreme crime of the modern era. In America, war is a bipartisan issue. The New York Times is no exception to that. Media scholar Alan Macleod writes about the paper’s record of supporting America’s wars, and the function it performs by doing so as such an influential paper:

Newsrooms across America are sent advanced copies of the Times’ front page so they will know what is “important news” and adjust their own coverage accordingly. In this way its influence extends well beyond its nearly 5 million subscribers, its output becoming the first draft of history. Yet, when it comes to U.S. intervention, the Times offers its “consistent support” for American actions around the world, [Professor Ian Hudson of the University of Manitoba, co-author of “Gatekeeper: 60 Years of Economics According to the New York Times] says(…) Indeed, there has rarely been an effort at regime change that the paper did not fully endorse(…).

The article goes on to describe the paper’s position on just a few of America’s international interventions: Iran in 1953, Brazil in 1964, Chile in 1973, and Venezuela in 2002 and 2019. Macleod concludes the piece by hammering home The New York Times’ vital place in the architecture of American imperial orthodoxy:

To be sure, the New York Times is not the only major media outlet guilty of reflexively supporting every U.S. action around the world. The Economist and the Washington Post both came out to support the coup in Bolivia, as they had done before with Venezuela. But the Times’ position as “the paper of record” sets it apart in terms of importance.

This position makes it a crucial weapon in the propaganda war waged on the American people in order to manufacture consent for regime change abroad.

And that’s not even touching on the endless stream of pro-capitalist propaganda the paper puts out.

All in all, despite what this post (and, uh, the many others I’ve likely written complaining about them) suggests, I don’t invest much time in The New York Times.

But a few days ago the company’s video wing put out a YouTube clip that I only just stumbled upon earlier today. I was ready to scroll right past like usual whenever I see some of their nonsense, but the title gave me pause. So I gave it a watch. And holy sh*t. They talk sense! I don’t know who the main bloke in the video is, but he talks sense! Underneath the banner of The New York Times! Dear lord.

The video’s premise is that the Democratic Party in the US so often functions in ways that are diametrically opposed to its stated goals. While it talks the talk and pays lip service to progressive ideals, in reality the officials elected on its ticket perform a similar structural task to The New York Times: Upholding the status quo.This includes feeding into and reinforcing the counter-progressive and ideologically limiting two-party circus that is American political discourse.

As Noam Chomsky says: ‘In the US, there is basically one party - the business party. It has two factions, called Democrats and Republicans, which are somewhat different but carry out variations on the same policies.’ Swining back and forth between two wings of imperial capitalist orthodoxy suits the powers that be very well, as it does the elites of both parties. To Democrats, the spectre of Republicanism is a very useful tool. Its utility is twofold: On one hand it gives them a great boogie man that impels progressive minded voters to vote for what is framed as (and often is) the slightly less bad option, and on the other hand it povides them with a convenient excuse for not making any real, substantive changes to the system—‘We’d be able to get this done, if it wasn’t for those damn obstructive Republicans!’ What the NYT video touches on is what happens when Democrats are in charge, and they wield the power of the state. What do they do with that power? We know what they do abroad—they bomb poorer countries into oblivion—but this clip’s focus is on the domestic side of things. It’s rare indeed to see a pillar of the capitalist establishment get so close to the heart of things, to pause the circus, and to point out that the truth is revealed when you remember that, in the words of George Carlin: ‘The politicians are put there to give you the idea that you have freedom of choice. You don’t. You have no choice. You have owners. They own you. They own everything. It’s a big club, and you ain’t in it.’ Here, give it a watch while I go grab a drink of water and take a breath of fresh air to recover from the shock of seeing the NYT publish something like this: