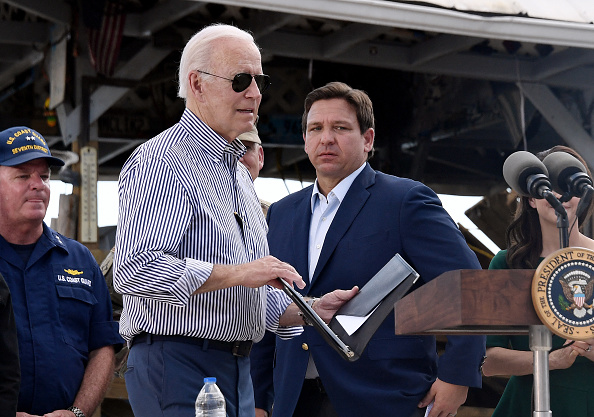 The Narrative for the 2024 Presidential Election Is Taking Shape

All I can think about, however, is politics, and if I want to write about politics but don’t want to write about the midterms, that leaves 2024. We don’t know what will happen tonight, but we do know that the Republican party will start work immediately casting blame or taking credit. If the Republicans do well, The Former Guy will not be the reason. If the Republicans do not do well, TFG will be the reason. TFG, all the same, will do whatever he can to take credit for victories while casting blame for losses. He’s also poised to announce his reelection bid any day now.

I think we all know that the popular wisdom is now: If TFG wins the GOP primary, the Democrats run Biden again. Biden can beat TFG. At this point, Andrew Yang could be TFG (actually, Andrew Yang seems to be the mood of the country right now. Ugh.) TFG will almost certainly hold a lead in Republican polls for the next year. However, the more he campaigns, the more bored the GOP party becomes with him. He floated his nickname for Ron DeSantis — Ron DeSanctimonious — a couple of nights ago, and it did not go well. GOP donors are shifting their focus away from TFG, and even Fox News is less interested in another TFG campaign. There’s also that whole indictment possibility hanging over his head.

The Washington Post is already advising Biden to drop out in anticipation of TFG fading. Politico, meanwhile, is also speculating about who might run in 2024 instead of Biden, and how the White House itself does not believe that Kamala Harris is a viable candidate, but that Doug Emhoff is trying to rally the troops around Kamala. Michigan governor Gretchen Whitmer is a new-ish name being floated, along with the usuals: Buttigieg and Gavin Newsome.

Notwithstanding whatever happens in the midterms, Biden has had a good year. His approvals rebounded. He’s being blamed for inflation, which he has little control over, but once that issue is in the rearview, I think that Biden will be on solid footing in 2024. The political winds will shift a few times between now and then, as they always do, but it takes unusually bad incumbents to lose their presidential reelection bids. I don’t think that Biden fits into the same category as Jimmy Carter or TFG. But he will be 81, which is fine if he’s running against TFG. Marianne Williamson could beat TFG. Against anyone else? Biden has done a lot of good in the last couple of years; he deserves to make that decision himself.

Mostly, I just want to talk about 2024 as though it will be a routine Presidential election, where Republican legislatures and Secretaries of State have not already conspired to choose a winner. Talking about whether Biden will run feels like normalcy; I want to cling to that for at least a few more hours.


← Wordle Now Has an Editor; She Is Making a Slight Change | 'What's Your Most 'I'm With the Boomers On This' Opinion? →