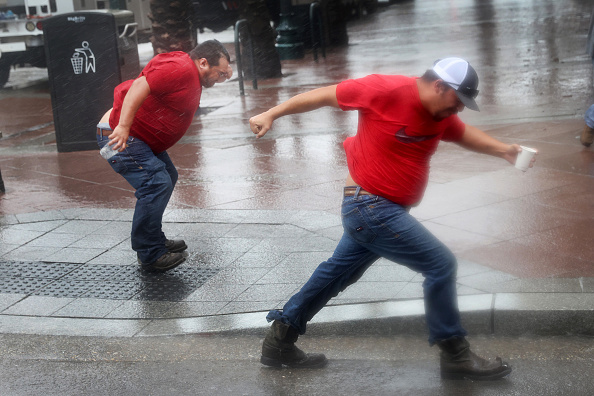 The Morning Briefing: Life Sure Feels Like Walking Against Hurricane Winds Right Now, Don't It?

See, this is why I don’t post Morning Briefings too often anymore, because it’s all bad, and we are helpless to do anything about it. Can we stop a hurricane? Or a hurricane of idiots? No, we cannot. All we can do is gnash our teeth. But listen: If you’re too old to change course in your chosen professions, and you have smart-ass kids: Encourage them to be nurses and scientists. It will mean a life of being constantly underappreciated, but that is exactly what the world needs right now, y’all.

All this badness, like whiskey, is bringing out my Southern accent. Where do we start:

— A hurricane —intensified by climate change — blew the damn barn doors off of New Orleans again on the goddamn anniversary of Katrina. It’s still raining cats and dogs, power’s been knocked out to the entire city, and they’re just now seeing the extent of the devastation in the daylight. COVID was already straining the hospitals in Louisiana before Ida came in and wrecked the place, so I’m sure that this is only going to add to that strain. Is there a silver lining anywhere in this? Well, at least it wasn’t quite a Category 5, and at least it’s not suffocatingly hot this week (it’s in the upper 80s instead of the upper 90s), which would make being without electricity (and an AC) an even more unbearable situation. Good luck to y’all down New Orleans. We’ll hold some space in our thoughts for you.

— COVID hospitalizations are now over 100,000 in the United States, and people continue to take goddamn horse medicine for their symptoms despite there being no evidence that it works (no, really, It’s been thoroughly tested on COVID. It’s useless). Most of the damage is still in the South, but it’s not great everywhere else, either, and it’s not because the vaccines don’t work. This is what the world looks like with the vaccine and everyone basically going back to normal with limited use of masks in limited areas. This is what “living with COVID” looks like. Just ask the UK. Don’t count on it getting a whole lot better anytime soon.

There are a lot of high-profile anti-vax and anti-mask people dying of COVID, too, and a lot of people celebrating their deaths on Twitter. That don’t sit right with me. I know our sympathies have run out, I know they’re a danger to mankind, and I know that karma is a bitch, but most of us support reform and oppose the death penalty, don’t we? I guess we’re making exceptions for right-wing idiots and blowhards now? Ain’t no reason we need to be as hypocritical and callous as they are. I am not saying we need to mourn their passings — you won’t see me shed any tears — but there isn’t any reason we need to be dancing on anyone’s grave, either.

Is there a silver lining in all of this? Boy, I don’t know. The case rates in the Southern states (Florida, Louisiana, Missouri, Arkansas) where the Delta variant hit first and the hardest are starting to come down, so I reckon that is something. But there are still miles to go.

— And then there’s Afghanistan. Now, there’s a nightmare disasterbacle. Terrorists are killing people trying to get out of Afghanistan, and the United States is killing civilians in its attempts to retaliate. Thousands of Americans and Afghan allies are still stuck in Afghanistan and as our withdrawal deadline quickly approaches, Biden’s approval ratings are dropping, everyone’s mad at everyone, but there’s not much anyone can do about it except armchair quarterback. The left is furious that we haven’t gotten more folks out of the country, and the right is screaming “keep them out of here,” while our attempts to make it safe to evacuate more people are getting innocent folks killed in the process. This is the quagmire of all quagmires and ain’t nobody got a solution, but boy, do we have criticisms.

— Finally, we’re still dealing with supply shortages all across the globe due to climate change and COVID. It’s probably not going to get better real soon, either, so we best get used to starting our day without that cinnamon dolce flavoring in our Starbucks coffees or proper containers for our kids’ Chipotle taco kits. We might have to spend a few extra dollars for our favorite board games, too. We’ll make do.