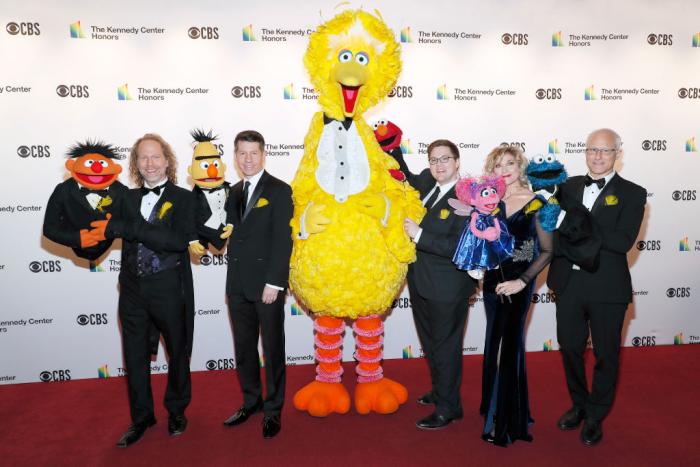 Sesame Street and PBS are popular targets for conservatives. A television channel focused on education, culture, and history raises their hackles because so few of those subjects fit the conservative worldview. Let’s face it: When your greatest contemporary artists are Toby Keith, Jon McNaughton, and Tim Allen, you aren’t exactly the center of a cultural empire. Since most conservatives are still pushing fossil fuels and their doctors are hooked on prayer, colloidal silver, and leeches, they aren’t big on the educational aspect either. Mallory Archer summed up the conservative viewpoint nicely.

We all know Big Bird and, unless you suffer from ornithophobia, universally love him. Sure, he’s been confusing kids by singing the Alphabet as though it were a word since 1970, but it’s a small price to pay for a television show that teaches children empathy along with reading and math. Jim Henson (RIP), Muppet Studios, and PBS have spent literal decades helping children learn basic life skills. But since everything is political now, the conservative outrage internal combustion engine fired up this weekend when Big Bird tweeted about his Covid-19 vaccination.

I got the COVID-19 vaccine today! My wing is feeling a little sore, but it'll give my body an extra protective boost that keeps me and others healthy.

Ms. @EricaRHill even said I’ve been getting vaccines since I was a little bird. I had no idea!

Sesame Street has educated children about communicable diseases a number of times. In 1998, episode 3735, Big Bird got the “birdy pox” and a doctor advised him to stay home and limit contact with other people. In an even more applicable example, in 1972’s episode 343 Big Bird, Snuffleupagus, and a number of human residents attend a measles vaccination clinic at Mr. Hooper’s store. The vaccination process is explained, as is the concept of public health, in both English and Spanish, no less, which I imagine frosts some conservative balls. Sesame Street has done a number of explainers for the Covid-19 pandemic, including Elmo’s father getting vaccinated, several town hall events, and child Muppet character Rosita got her first vaccination just the other day.

The outrage follows the same familiar, uninspired, inaccurate, and lazy lines of attack as always. 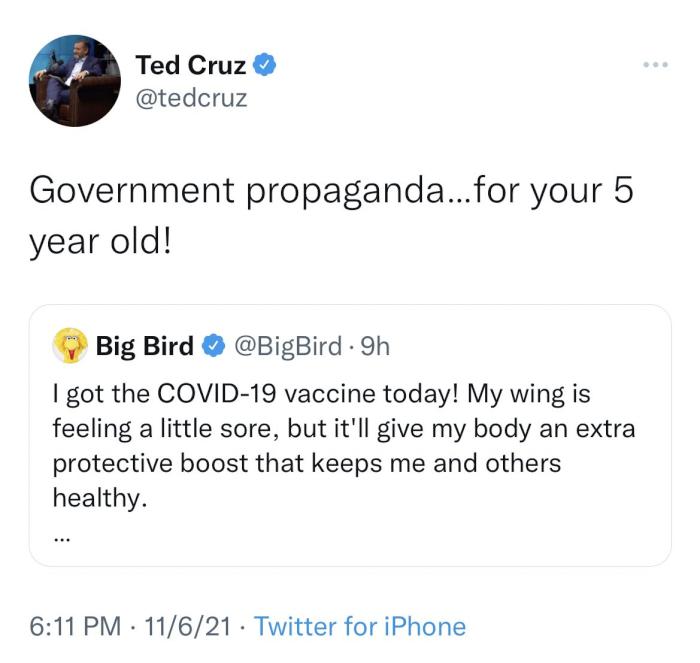 If your kindergartener is on Twitter, you’ve got a bigger problem than their exposure to vaccine “propaganda.” 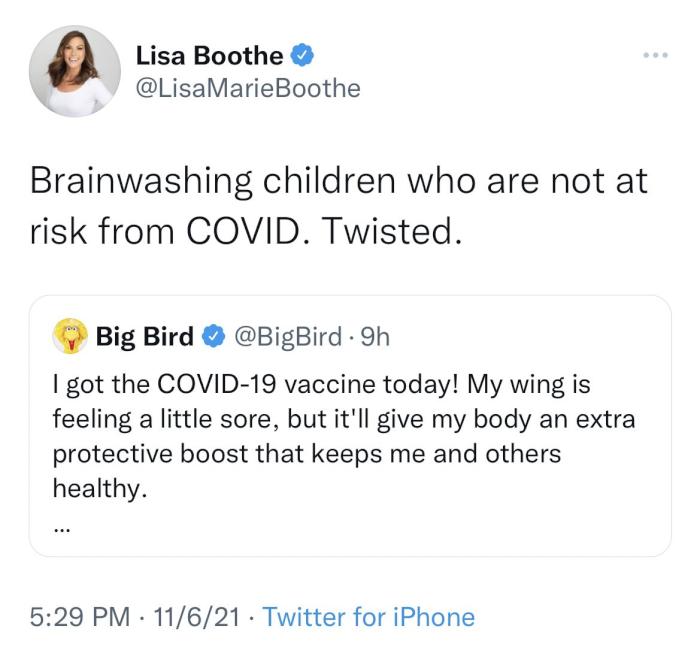 At least 8,700 children worldwide died of Covid-19 by May 2021. At least 700 of them were American. Thousands have been hospitalized. The true numbers are undoubtedly higher. 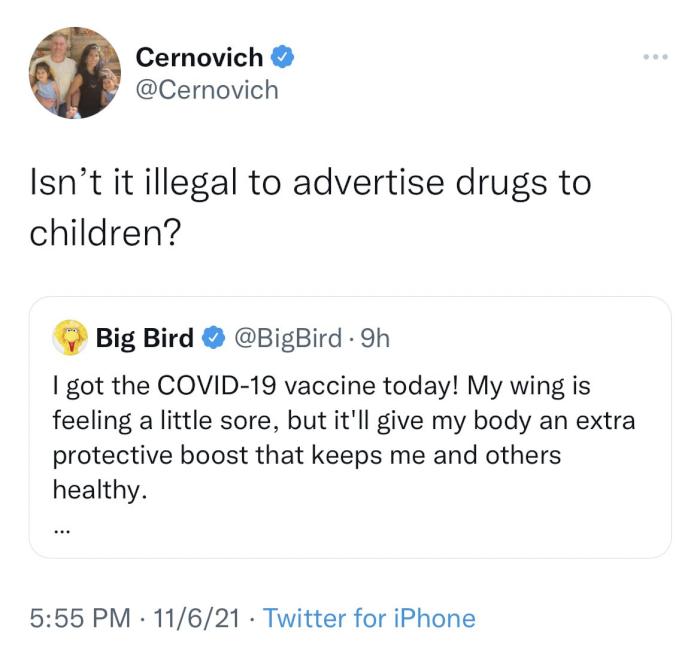 A vaccine isn’t a “drug” and Mike Cernovich is a pro-rape, misogynistic, racist human-shaped sack of crap. If he burst into flames in front of me, I’d roast hot dogs over the crackling embers. Anyone listening to what he’s got to say is already a lost cause. 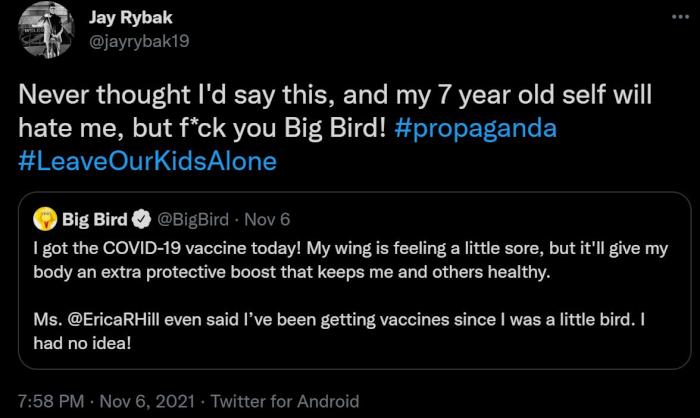 Pretty sure this guy helped The Ginger f*ck an ostrich.

Cruz and his buddies’ real issue with Big Bird tweeting about Covid-19 vaccinations, or Sesame Street explaining the benefits of wearing a mask and washing hands is that educated people, even children, ask questions. That’s a problem when one’s goal is to turn Americans into peasants who listen exclusively to their evangelical Christian, Republican leaders. It’s why Ohio State and Yale-educated venture capitalist J.D. Vance is out here ranting about the college professors who are the only reason anyone ever read his terrible book like he’s about to lead a Khmer Rouge-esque purge.

@JDVance1 at the National Conservatism Conference:

My point is that the Covid-19 vaccine is safe, effective, and free. It has the potential to keep your child out of the hospital. It will help ensure their grandparents, boostered or not, don’t catch the virus. My father ended up in the hospital and on a ventilator in 2020 after my asymptomatic, flu-infected daughter passed it on to him with a single hug. We didn’t know she was sick at the time and he had other health issues but even so, I will feel guilty for the rest of my life. Trust me when I say it’s not a feeling you want hanging over your head. In a few hours, my children will receive the first dose of the vaccine. I hope they don’t experience any side effects — I didn’t — but if they do, they can stay home from school tomorrow and watch Sesame Street and other great PBS programs. It’s a small price to potentially save a life.

Please, listen to the medical community. Immunize your children. Protect them, their friends, and your family.