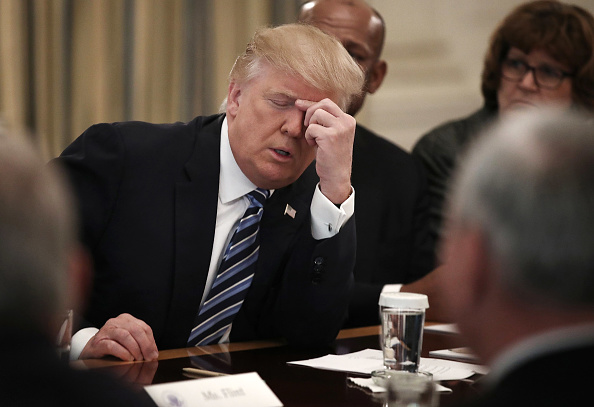 The Last 24 Hours of Trump Twitter Have Been Something Something

It has legitimately gotten to the point where I mostly just scroll past Trump tweets retweeted into my timeline. It’s not just Trump fatigue anymore. He’s just raving now. Or as, The New York Times put it, “What I was feeling was beyond Trump fatigue and bigger than Trump exhaustion. It was Trump enervation. Trump enfeeblement.”

The man is on an unhinged streak the likes of which we’ve … seen several times before, honestly. But now the man is taking aim at the only damn people who are still behind him, namely Fox News:

Just watched @FoxNews heavily promoting the Democrats through their DNC Communications Director, spewing out whatever she wanted with zero pushback by anchor, @SandraSmithFox. Terrible considering that Fox couldn’t even land a debate, the Dems give them NOTHING! @CNN & @MSNBC….

….are all in for the Open Border Socialists (or beyond). Fox hires “give Hillary the questions” @donnabrazile, Juan Williams and low ratings Shep Smith. HOPELESS & CLUELESS! They should go all the way LEFT and I will still find a way to Win - That’s what I do, Win. Too Bad!….

….I don’t want to Win for myself, I only want to Win for the people. The New @FoxNews is letting millions of GREAT people down! We have to start looking for a new News Outlet. Fox isn’t working for us anymore!

Oh, he’s just raving because a morning anchor didn’t forcefully push back against the DNC Communications director who said that Trump was losing to a Democrat in all the polls.

The interview that set Trump off is one in which DNC comms director @XochitlHinojosa went on Fox News to talk about the …… [checks notes] …. Democratic presidential debates. Trump apparently wanted host Sandra Smith to blindside her with Trump talking points. pic.twitter.com/RszlzY4Jgg

Meanwhile, Peurto Rico is bracing for another hurricane, and Trump is doing everything he can to provide comfort to the people of P.R. by … shitting all over them and blaming them for the hurricane?

Wow! Yet another big storm heading to Puerto Rico. Will it ever end? Congress approved 92 Billion Dollars for Puerto Rico last year, an all time record of its kind for “anywhere.”

We are tracking closely tropical storm Dorian as it heads, as usual, to Puerto Rico. FEMA and all others are ready, and will do a great job. When they do, let them know it, and give them a big Thank You - Not like last time. That includes from the incompetent Mayor of San Juan!

Puerto Rico is one of the most corrupt places on earth. Their political system is broken and their politicians are either Incompetent or Corrupt. Congress approved Billions of Dollars last time, more than anyplace else has ever gotten, and it is sent to Crooked Pols. No good!….

….And by the way, I’m the best thing that’s ever happened to Puerto Rico!

He’s probably just mad because P.R. isn’t going to nuke the hurricane. Speaking of which:

Axios (whatever that is) sat back and said GEEEEE, let’s see, what can we make up today to embarrass the President? Then they said, “why don’t we say he wants to bomb a hurricane, that should do it!” The media in our Country is totally out of control!

(Axios sticks by its reporting, by the way.)

Meanwhile, he seems to be very upset that Elizabeth Warren is attracting large crowds at his rallies.

They do stories so big on Elizabeth “Pocahontas” Warren’s crowd sizes, adding many more people than are actually there, and yet my crowds, which are far bigger, get no coverage at all. Fake News!

He’s not happy he has primary challengers, either.

Can you believe it? I’m at 94% approval in the Republican Party, and have Three Stooges running against me. One is “Mr. Appalachian Trail” who was actually in Argentina for bad reasons….

….Another is a one-time BAD Congressman from Illinois who lost in his second term by a landslide, then failed in radio. The third is a man who couldn’t stand up straight while receiving an award. I should be able to take them!

Meanwhile, the “bedbugs” news cycle is running on two tracks:

No bedbugs at Doral. The Radical Left Democrats, upon hearing that the perfectly located (for the next G-7) Doral National MIAMI was under consideration for the next G-7, spread that false and nasty rumor. Not nice!

A made up Radical Left Story about Doral bedbugs, but Bret Stephens is loaded up with them! Been calling me wrong for years, along with the few remaining Never Trumpers - All Losers! https://t.co/KlzzMC40Vt

“The infestation of bedbugs at The New York Times office” @OANN was perhaps brought in by lightweight journalist Bret Stephens, a Conservative who does anything that his bosses at the paper tell him to do! He is now quitting Twitter after being called a “bedbug.” Tough guy!

(In case you missed it, Trump decided to hold the next G7 at his own resort, Doral, despite having actually been sued by a guest for bedbugs).

But don’t worry, folks. He’s got this China situation under control.

So interesting to read and see all of the free and interesting advice I am getting on China, from people who have tried to handle it before and failed miserably - In fact, they got taken to the cleaners. We are doing very well with China. This has never happened to them before!

Does Joaquin Phoenix in the New 'Joker' Trailer Live in a Society?